The Historic City of Dublin (T)

As someone who has lived for a year in Dublin, I would be thoroughly surprised if It became a WHS. It lacks any really notable buildings (apart from Trinity college perhaps) and Its urbanism didn't strike me as unique in any way. This is clearly a vague and halfhearted proposal to get Dublin some WHS. No doubt given more time Ireland will find some more acute proposal to fit Dublin into the list.

I visited zadar a couple years ago and tbh at the time I was a bit underwhelmed. I expected quite a bit of the city and It didn't fullfill. The Fortifications pale in comparison to those of Dubrovnik, the city has way less charm than sibenik and the Roman remains are almost inexistent. Nevertheless It is a nice city, with a pleasant old town, a very interesting church, a surprising Cathedral and an impressive set of fortifications.

In fact, Zadar IS already part of the whl as a component of venetian works of defence owing to those impressive fortifications. However, the new proposal, far from an extension, would requiere a completely new site, whose main Focus would probably be croatian preromanesque. 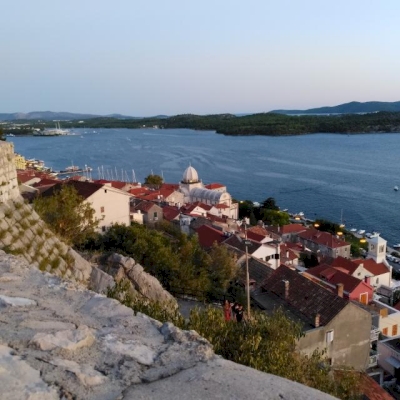 Sibenik was the last stop before the eventual end of my balkans coastal route in zadar.

The city IS as most have said, surprisingly charming. It lies at the slope of the coastal mountain range and surveys a spectacular strait. As such, good panoramic photos are a given.

The OU however IS based on only one building, the Cathedral, which is [...]

I honestly thought this was a WHS (the spanish wikipedia says so...)

David Gareji monasteries IS a set of monastic complexes, atop a desertic plateau in the border between Georgia and Azerbaijan. The landscape itself IS nothing short of spectacular.

This place is HUGE. It was a very important pilgrimage site from the 11th to the 13th century, home to a thriving school of fresco painters funded extensively by the georgian kings.

Most people visit David Gareji in the georgian side and udebno in the azeri side. Getting there requires some determination but thankfully no border control. To put It bluntly, the site is in the middle of nowhere and the roads are quite bad.

I might be biased because i happen to live in San Lorenzo de El Escorial (the town which was founded during the construction of the monastery) but I thought I might as well give my POV.

First off the place IS HUGE. It's said to be the biggest renacentist complex in the world and It's likely the biggest granite structure. It was Built in the 16th century by order of Philip II, during the heyday of the spanish empire and the counter reformation. It houses the Royal mausoleum and an espectacular collection of paintings.