Tikal National Park comprises the remains of a major center of the Maya civilization. It lies within the Maya Forest, an area now rich in animal and plant diversity after having recovered from centuries of human land use.

Tikal was one of the most important kingdoms of the Ancient Maya, who reigned over large parts of the Maya region during its heydays between 200 and 900. The site shows different stages of their evolution, resulting in monumental structures such as pyramids, temples, ball courts, stone stelae with the data of their rulers, public squares, and a network of causeways (sacbe).

The natural surroundings of Tikal consist mainly of a rain forest, where several animal species have their home: among them jaguar, puma, tapir, howler monkeys, anteaters, crocodiles, raccoons, skunks, weasels, and various birds. 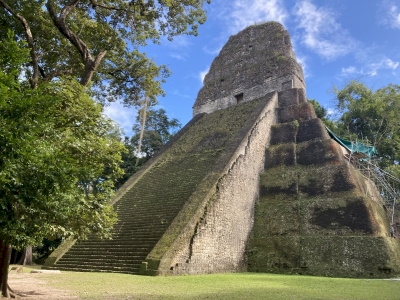 Since my previous visit, 25 years ago, I had forgotten what Tikal looked like. It has a real ‘lost city’ feel, especially at the main plaza. With its white stucco elements and honeycomb towers, it has a different architectural style than the other Maya sites. There’s much more to see than the pyramids: I encountered petroglyphs, steam baths, water reservoirs (Tikal had no access to water other than what was collected from rainwater), stelae, giant stucco masks, and historical graffiti too. Howler monkeys, Geoffroy’s spider monkeys, coatis (pizotes), and agoutis are mammals that are easily seen as well.

This time I explored the park in 2 sessions, from 14-17 on the first day and the next day from 6-10. I stayed overnight near the entrance at the Tikal Inn. I walked 10 and 12kms respectively during these visits, and believe to have covered all there is to see. Maps.me works and will show the approximate location of all structures (the connecting smaller paths aren’t displayed that accurately). The way to the Exit (Salida) is always signposted. There aren’t special Covid measures at the site, which is mostly unsupervised anyway. Especially the morning session was very quiet, with hardly any other visitors around.

Getting there on public transport
Minivans by a company called Atim leave a few times per day from the central bus terminal in Santa Elena (Flores). Enter the terminal, exit again unto the parking lot of the buses and go all the way to the left, around the corner. The office of Atim is the penultimate, next to Cristobal Colon. Don’t listen to people telling you that the public buses won’t run or “have just left”, especially not to that guy from Mundo Maya who has a loud presence at the bus station. When you can’t find it, ask around for buses to Remate, as the word “Tikal” alone brings dollar signs into the eyes of many. My 10 a.m. bus took 1.5 hours, cost 50Q and it stopped at the park gate to let you buy the entrance tickets to Tikal. 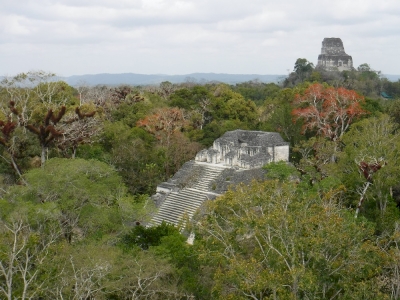 Tikal was the last major prehispanic archeological site I visited on my Mexico-Guatemala-Belize trip last winter. And it was the best one!

The size of the site (gigantic), the number of pyramids and structure (numerous), the quality of the pyramids (amazing) and the wildlife (abundant) cannot be compared with other sites (even with Palenque). Me and my friend visited on a tour book at our hostel in Flores. We didn't took the sunrise tour, but rather the early bird one arriving in Tikal for opening. I think it's the best time to visit as it is not a ridiculously early wake-up, the crowds are still manageable and the wildlife is active. Our tour last half a day, and we head back to Flores at noon.

The most interesting complexes are la Gran Plaza, el Mundo Perdido, la Plaza de los Siete Templos and el Templo IV. It's a good idea to have a guide here to truly understand the site. Many pyramids and temples can be climbed on wooden structures. The view from la Gran Piramide de Mundo Perdido and from el Templo IV are nice. It's also nice to climb on Templo II and on both Acropolis Norte y Central to get the view over la Gran Plaza.

Wildlife we spotted include a lot of coatis, an agouti and howler and spider monkeys. Even without binoculars, we spotted 19 bird species, including cool ones such as great curassow, ocellated turkey, limpkin, slaty-tailed trogon, black-headed trogon, collared aracari, keel-billed toucan, orange-breasted falcon, red-lored amazon and montezuma oropendola.

In brief, Tikal deserves its world wonder status as one of the greatest prehispanic archeological site and a hotspot for North American tropical biodiversity. A must-see! 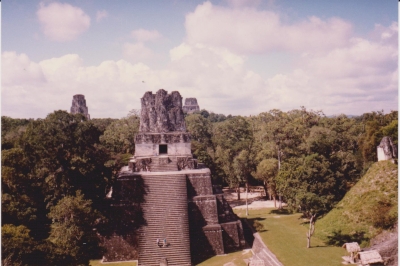 Tikal was the first ancient Maya site that I ever visited, and it remains my favorite one. I've since visited about 20 others, but Tikal still stands above them all.   The combination of the lush jungle and the steep pyramids poking above the canopy with their delicate roof combs above the  top temple rooms was just fantastic.  I loved the combination of the imposing pyramids with the detailed hieroglyphic stellae and the occasional giant stucco mask.  You get it all at Tikal, whereas other places, like Calakmul, for example, disappointed me a little because it didn't have much of the finer art, like stellae, while it had plenty of impressive massive buildings.  When we visited Tikal (1988) you could still climb on any of the structures, although a couple of them required getting up some rickety wooden ladders. I still remember how scary it was to climb the very narrow steps and having respect for the ancient Maya who had to ascend and descend these staircases routinely 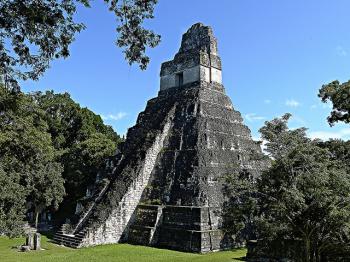 I visited this WHS in December 2015. I drove from Palenque to Tikal by car through the El Ceibo border. Tikal is definitely Guatemala's highlight and one of the best WHS I've visited so far. The rainforest environment is still intact although the central plaza has been cleared. However, 'VIP service' buses/vans should not be allowed inside the historical area proper as is currently done from the back roads for the older wealthy tourists. However, apart from this practice, the main ruins are spectacular as are the minor ones still full of scrub and overcome by the jungle. Tikal is the best preserved example of an ancient Mayan city. Climbing is prohibited mainly on Temple I although access to the other main temple structures is gained by climbing wooden stairs on the back of the structures. As always, birdlife and fauna is most 'active' at sunrise/sunset. It's worth staying at least 2-3 days to be able to enjoy the park at different times of the day. The sunrise hype can easily be skipped as it's the only time when the site is really packed and since it is frequently misty, there is nothing you'd miss if instead you stay in the lodge in the national park (except the crowds and the early wake up call at 03:30!).

Tikal was a highlight of my 2-week stay in Guatemala. Before I left for Guatemala, I saw a travel program on TV about pyramids and it stated that the pyramids at Tikal were superior to those in Egypt. Since I haven't been to Egypt, I can't say I agree or disagree. The view from Temple IV is amazing. I also enjoyed the walk through the jungle in order to get to the North Acropolis. I was delighted by the spider monkeys and toucans!

The flora of Tikal

Two tourists are caught defacing 1,300-year-old Mayan temple by carving their initials into the wall (28.11.19)

Tourists flocking to Guatemala for "end of the world" parties have damaged an ancient stone temple at Tikal (24.12.12)

Pyramids: Several larger and smaller ones, including Twin Pyramid Complexes (wiki)
Acropolis: The "North Acropolis"
Stelae
Tombs: Tombs of many of the rulers on the dynastic ruler list have been discovered (wiki)
Petroglyphs: Petroglyph 1 is a 4x6m rock carving, depicting a captive.
Baths: Ruins of a temazcal (steam bath) south of Group F

Mayan culture: Tikal National Park is an outstanding example of the art and human genius of the Maya. (OUV)
Formative stage: Major construction at Tikal was already taking place in the Late Preclassic period, first appearing around 400–300 BC, including the building of major pyramids and platforms, although the city was still dwarfed by sites further north such as El Mirador and Nakbe (wiki)
Queens and Empresses: Lady of Tikal (Maya queen) described on several of its stelae

Built in the 8th century: At its height from 700-800, Temple of the Great Jaguar probably built 730 completed by 734
Holocene: The Mesoamerican tropical rainforest evolved after the last glaciation in the Late Pleistocene.

On Banknotes: 1/2 Quetzal; 1973
James Bond in Movies: Moonraker (1979)
Star Wars: The ancient ruins of Tikal and the surrounded forest were depicted as the Rebel Alliance’s military base on the fourth moon of Yavin in “A New Hope”
Foreigner prices: Locals Q 25.00, foreigners pay Q 150.00.