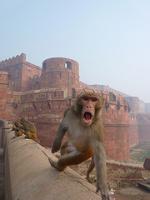 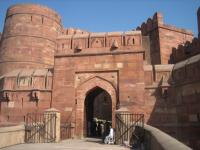 Located in a Former Capital: Agra, the former capital of Mughal Empire (1526 - 1658)
Mughal Empire: The great Mughals Babur, Humayun, Akbar, Jehangir, Shah Jahan and Aurangzeb lived here, and the country was governed from here.
Eunuchs
The British East India Company (EIC): Was captured from the Marathas in 1803 by forces of the British EIC. They turned it into a garrison for EIC soldiers and demolished a number of the buildings inside. During the Indian Rebellion of 1857 against EIC rule the EIC forces were besieged inside the fort

Red Fort: Known as the Red Fort of Agra
Sound and Light Show: since Feb 2011
Viewable from another WHS: Can be seen from the terrace of the Taj Mahal
Foreigner prices: Indian Visitors:Total Rs.40.00 Citizen of SAARC and BIMSTEC countries: Total Rs.80/- Other Foreign Visitor Total Rs.550/-