Bulwarked Frontier Fortifications is part of the Tentative list of Spain in order to qualify for inclusion in the World Heritage List.

The Bulwarked Frontier Fortifications comprise eight fortified towns and military fortresses in the border area with Portugal and France. The fortifications were constructed in the period between the beginning of the 16th century to the end of the 18th century. Major components of these fortifications were built in response to advances in military technology and the increased use of artillery during this period. 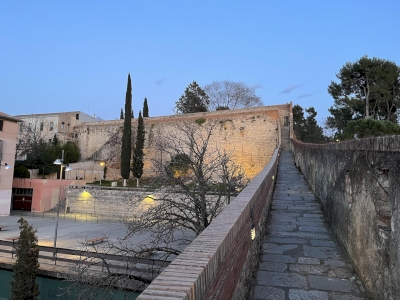 I visited Gerona as a day trip from Barcelona in February 2022. This is a city with a lot of history: it was one of the most important jewish cities around 1200, important enough that a WH nomination from that perspective wouldn't surprise me, though I didn't find much that I could clearly link to this except the jewish museum. But it was a Monday and I missed that. Gerona has certainly the most impressive old town I have seen on this two week trip in Catalonia. It is not huge, basically arranged around the cathedral hill but it offers what you would wish for: narrow steep lanes, arcades with arches, several massiv churches and it is quite lively with shops and cafes mainly in the lower part. In comparison the so called Barrio Gotic of Barcelona is boringly flat and at least half of the buildings are from the 19th century or later.  Gerona offers also several very interesting museums of history, archeology (in a romanesque convent), jewish history, art, a cathedral treasury, an nice Arab bath and a Caixa forum. I missed most of them since I used the only midday in town to travel to Empuries. But I think it is certainly worth another day trip. The cathedral is impressive: huge stairs lead to its renaissance facade and the gothic nave is one to the widest  in the world (supposedly second only to St. Peters in Rome), I found it very dark nonetheless and as intimidating as most Spanish churches (which might as well be intentional). Finally there is the great view on the river with colorful houses with oriels on both sides that you find on every prospect or website of the city. The red iron bridge is by Gustav Eiffel. This is very nice but since there are no paths along the river you can't do much more then cross the bridges and take a picture.

The old town is hugged by walls from three different periods: There are Roman, Carolingian and Medieval parts. You can walk on top of the wall for the largest extent which offers nice views on the walls, the city and the surrounding landscape. They are flanked very picturesquely by cypress trees. The oldest walls are directly to the north of the cathedral and there are little public gardens around them. It is also a pleasure to compare the walls from the different time periods and there state of preservation. If you compare it though to some of the great city walls on the list like Lugo and Avila or Provins and Dubrovnik I cannot not see what the walls would add to the list. And the accumulation of several interesting sites, a tactic that Spain and many other countries seem to pursue more and more, does not convince me or create OUV. But Gerona is well worth at least a full day for a visit. While people in Barcelona are tired of tourists and in Tarragona they have no plan, here they make you feel welcome.