Amalienborg and its district

Amalienborg and its district is part of the Tentative list of Denmark in order to qualify for inclusion in the World Heritage List.

Amalienborig, the home of the Danish royal family, is located in an 18th century extension of the medieval town of Copenhagen. It includes a central octagonal courtyard and its two axial streets that were laid out to celebrate the 300 year jubilee of the royal dynasty. On the central place four nobles built four almost identical mansions. They contain some of the most festive interiors of the country. An equestrian statue of Amalienborg’s founder was erected in the middle of the courtyard. A century later a domed church was added.

Map of Amalienborg and its district 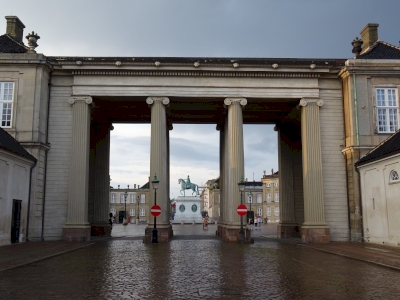 Frederiksstad and the walk to the Kastel and the Little Mermaid are probably my favourite parts of Copenhagen, so, since my first visit to the city, I always try to take a walk in this neighbourhood when I am here (the last one in August 2021). Apparently, little has changed over time, maybe only the Amaliehave, the small park on the harbour, has been refurbished a little, but it could have been only my impression. The atmosphere is calm and noble, distant from the bustling Nyhavn, the promenade along the banks northwards to the Nordre Toldbod has probably the best sights of Copenhagen, overlooking architectural masterpieces like the opera house and the harbour that widens into the sea, with distant islets and the occasional docked galleons, even warships on the other side (Elefanten). It all feels relaxed, especially in a long summer evening, and the Amalienborg proper immutable in its characteristic octagonal symmetry.

The official "documentation" does not say much apart from the obvious. However, the original planning of this district is very well readable still today, and it has kept much of its authenticity; I am fascinated by it even if I am no fan of Neoclassicism, especially not of the rather pedantic kind like is found here, and consider the Marmorkirke the remarkable crowning of the complex indeed, although I prefer turning my attention towards the waterside. I have not yet entered any of the royal palaces, and I sincerely do not regret it, as I do not expect any lavish interiors to add more value to this site: the focus is on the urban landscape.

Amalienborg has been sitting on the tentative list for a long time, to be precise: more than 28 years. It will probably stay there some more before being retired, as I line up with other members that there is nothing truly worldwide outstanding, as beautiful as it may be: such urban plans are not so uncommon, the architecture (at least to me) is not really exceptional, the royal ties are not decisive, in that, as Kyle Magnuson notes, in Denmark there are other more historically and aesthetically relevant sites in this sense (I immediately think of Frederiksborg in Hillerød). A must see in Copenhagen, but not worthy of inscription in my opinion: I see its position here only as a token to the prestige of the capital, of which Amalienborg is one of the hearts. At the same time, I also think that Copenhagen is a very intricate city, not always easy to like (I am not sure if I really do), but a very interesting patchwork of sometimes colliding and contrasting pieces, in a scenic position: to appreciate this, I can highly recommend a visit to the new (2020) Københavns museum. I mean, for example, where else do you find something like the amusement park Tivoli in the midst of a modern metropolis (entrance also included in the Copenhagen card, go there!)?! Working on these aspects, I, too, agree that Copenhagen might advance some kind of candidature, even if I suspect it would be a hard one at any rate.

Photo: Ionic entrance to Amalienborg from the southern branch of Amaliegade. 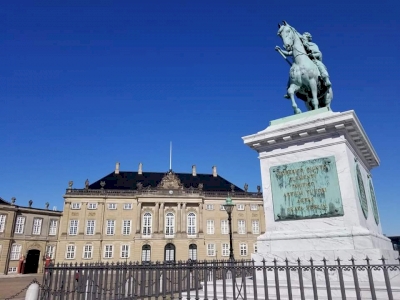 I visited Copenhagen back in April 2015, and Amalienborg is a great sight to see when walking between Kastellet and Nyhavn. It's essentially a city square surrounded by the 4 identical facades of the palaces. There's nothing too special about the palaces themselves; the uniqueness simply lies in this beautiful symmetrical layout, but does the layout alone make it World Heritage worthy? It's not an absolutely mindblowing or revolutionary idea, but it's the one aspect that could give the site the OUV it needs to be successfully inscribed, at least in my eyes. In the European region, there are just too many palaces that overshadow Amalienborg, and for now, that's the main idea that will continue to keep the title away from it. However, Amalienborg, to me, is one of the biggest jewels in Copenhagen's crown. Like the other reviews, I'd say that a "Historic Copenhagen" of some sorts that includes Amalienborg would definitely make a better site. 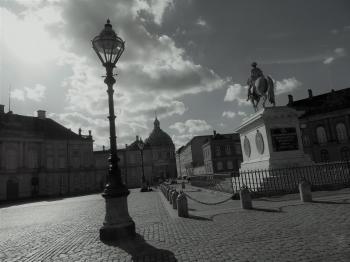 Since I was visiting Copenhagen for 3 days, I decided a 10 minute walk to Amalienborg would be worth the effort! Actually, since sunrise and sunset was at approximately 4am and 11pm respectively, I made two visits. The first visit was fortunate in that our arrival coincided with the changing of the guard. The second visit was during the late afternoon a couple days later, since I had the Copenhagen Card, I decided I might as well visit the interior of the palace as well.

The exterior is a pleasant white and the symmetry of design of Amalienborg is perhaps its most special characteristic, but like previous reviewers, it would be a stretch to claim any sort of OUV.

The interior of the palace is well-maintained, but there is little on display that sets this palace apart from the multitude of other royal heritage sites in other Scandinavian countries. I agree, Copenhagen may have enough for a world heritage city designation, so perhaps Amalienborg will one-day be an important component of a WHS. Yet, speaking only of royal sites in Denmark, there are at least 2 non-WHS palaces in and around Copenhagen that have comparable value, and perhaps could be better argued for world heritage status. That reality leaves any more Danish palace/castles being inscribed as fairly slim.

Unfortunately I don't see any reasons why this should be a World Heritage site. Amalienborg is a beautiful palace and the district around it is full of nice buildings but I didn't see anything special that would make it worth of World Heritage status. It lacks the "outstanding universal value". Also Unesco website's description doesn't give any good reasons to add it. Europe is full of places just like Amalienborg.

But Copenhagen as a whole is an amazing city! I'd like to see a nomination containing more historical places in Copenhagen, something like "Historical City of Copenhagen"!

Very beautiful and impressive site and vould perhaps be better than the present danish heritages.

I am not quite sure of how uniqe it is, there are many beautiful sqares arond the world.

Amalienborg and its district (T)