Ayeyawady River Corridor is part of the Tentative list of Myanmar in order to qualify for inclusion in the World Heritage List.

The Ayeyawady River Corridor covers 3 stretches of in total 400 km length of the Irrawaddy river, a vital transport network in Myanmar since the 6th century. It is the major habitat of the Irrawaddy Dolphin, as well as threatened birds and turtles. The integrity of the site is threatened by the construction of seven hydroelectric dams (commissioned in 2007). 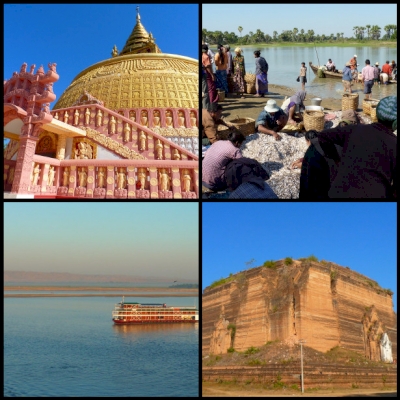 I visited several stretches of this tentative WHS during my 4 week trip in Myanmar in December 2012/January 2013. The Ayeyawady/Irrawaddy/Ayarwaddy River Corridor (ARC) covers a 400 km stretch of one of the last major undammed rivers in Asia. As such this tentative WHS focuses on the natural aspects and biodiversity of this important river in Myanmar.

Even though birdlife and unique river fish species are abundant, the only highlight worth mentioning is the Irrawaddy dolphin. This rare dolphin is found in the lower reaches of the river and known to help fishermen who practice cast-net fishing. However, it is not unique to the ARC and has also been spotted in the Bay of Bengal and in the Indian Ocean. Although I kept my eyes peeled whenever I was on a boat trip on the river, I wasn't lucky enough to spot the dolphin. I did manage to spot several bird species in large quantities with highlights such as the White-bellied Heron or the Lesser Adjutant which are specifically mentioned in the dossier.

In my opinion this tentative WHS would stand a far better chance as a cultural landscape or mixed site. Apart from fishing and the interdependence of local biodiversity and humans, there are a number of important religious and cultural sites which are worth visiting while visiting the Irrawaddy River. The best sections to explore in this regard would be the Mingun section in the Sagaing region. The huge uncompleted stupa (around 1790), was never completed due to an astrologer who claimed that once the temple was finished, the king would die. Had it been completed, it would have been the biggest stupa in the world at 150 metres. Before crossing the river by boat/canoe, make sure to see the gigantic Mingun bell which is believed to be the largest bell in the world.

Other pagodas worth visiting near Mingun are the Hsinbyume pagoda and the Settawya Pagoda. A common sight in the Sagaing region are the pink robed nuns collecting alms or walking by the river banks with their brittle red and black umbrellas. There are lots of nunneries and the important modern Sitagu International Buddhist Academy, with replicas of the toranas (ornamental gateways) and balustrades in Sanchi, India. The view of the river and the pagodas/stupas from Sagaing Hill at sunset is definitely worthwhile.

On the other side of the river lies Inwa which was once the imperial capital of Burma from 1365 to 1842. It was definitely one of the many highlights during my visit as I watched locals unearth a big newly discovered Buddha statue near the many ruins damaged by countless earthquakes over time.

All in all, I think that this site would only stand