The Maritime Heritage of Dragør Old Town and Harbour

The Maritime Heritage of Dragør Old Town and Harbour - A ‘skipper-town’ from the era of the great tall ships in the 18th and 19th centuries is part of the Tentative list of Denmark in order to qualify for inclusion in the World Heritage List.

Dragør’s well-preserved built environment ows its origins to a maritime community of the 18th and 19th centuries, when Denmark was among the leading seafaring nations in Europe. Its Old Town and harbour reflect the way ordinary people lived during the heyday of the tall ships – hence the nickname ‘skipper town’, a historical settlement with a maritime culture that specialised in an early form of entrepreneurial tramp shipping. The Old Town is densely built and consists of low houses, yellow-washed and mostly adjoining in rows, while the old harbour has an open character with a few buildings that have purely maritime working functions and context.

Map of The Maritime Heritage of Dragør Old Town and Harbour 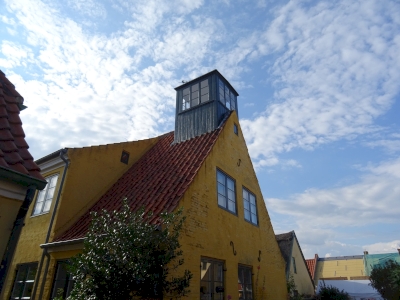 Getting out from the bus at Dragør on a beautiful summer day, the first thing I felt was the scent of marine breeze. It was already very different from Copenhagen, 15km away.

I visited this village as an afternoon trip from the capital at the beginning of August 2021, taking the bus (theres's substantially one line with medium frequency; get out at Skole/Vestgrønningen) directly from Copenhagen's central station to the stop in Dragør near library and school, at the entrance to the old town from the "main streets" Strandgade and Von Ostensgade. It takes more or less 40 minutes, and the bus first traverses extensive suburbs on the island of Amager (just Ama, for the locals), formally another municipality but more and more cannibalised by the expansion of the big city and the airport, then reaches the shore with more rural views and finally turns for Dragør. The block of the old town is a well defined yellow square of small pedestrian alleyways lined with typical decorative plant shrubs. It surely stands out from the newer parts of the settlements, and in this sense it has an authentic feeling. Going straight through the village, you'll reach the old harbour with the visitor centre and the museum, the explanatory heart of this nomination. They all occupy old buildings that once served to the professions and needs of a traditional port; now it all works as a marina and they are no longer used.

The museum (50DKK~6,7€, a little too much for my tastes; unfortunately and surprisingly not included in the Copenhagen card) was a little underwhelming. It was minuscule and somewhat unfocused: a couple of reconstructed rooms of heroic, "tall-ship" times, sea art by a local artist, screens digitally telling the story of the settlement, and upstairs a miscellany witnessing the stories of the inhabitants in the last century or so, together with a painting representing the contemporary sense of identity of amagerkaner. The most noteworthy piece is a rare Enigma machine which was somehow salvaged and used for a while still during the cold war... as outdated as it might already have been! There are also personal letters. The exhibition actually helps get a perspective of this site, and of many other similar ones in Danmark: starting in the Middle Ages as a bunch of seasonal fisher houses and making a fortune with herrings (mmh, I love herrings, I would have been a major sponsor), then Dutch colonisation supported by the king began in XVIth century and the commerce boomed; the most glorious period was in XVIII-XIXth centuries, the Skipper era, when on of the major occupations beyond shipping was opportunistically helping out vessels traversing the Øresund (not an easy sea stretch, it seems); later the town became a ferry terminal to Sweden, and finally it lost importance due to the disappearance over time of herrings and vessels and ferries. One of the funniest things to see in the museum are the videos of Swedish hordes in the '80s or so coming by ferry and doing furious shopping in the scant hour they had before the next departure!

Most of the so typical skipper houses of the village date to XIXth century, made out of brick, and are the legacy of master builder Blichmann. This makes the old centre homogenous and integral, even if by now it looks totally gentrified to me, and so, in some sense, no longer alive. One way to explore the nooks and crannies of Dragør and trying to get lost in its lovely right-angled alleys and verdant squares (a very difficult task), probably even more interesting than the visit to the museum itself, is the booklet A guide to old Dragør sold at the tourist office, for an honest 40DKK. It really has every information you might desire, and even more. In town there is also an art exhibition, and it seems that the harbour has another visitable building, though I did not get any information about it and did not manage to see either.

Having strolled down literally every lane and also paid a visit, why not, to a Bronze age mound (they do abound in Denmark), I finally took my dinner (late, at 18... always a strange feeling for my usual Italian rythms) at the food festival that was animating the harbour (it does not appear in Caspar's picture, so probably we crossed our paths with some days of difference). This was a nice touch and can greatly enhance a visit. Then, I profited of the many light hours to wander a short trait of the Amarmino (on this site, you find the map; also look here), a 27km-long path that connects the southern part of Copenhagen to Dragør. Actually, the Amarmino might be an alternative to the bus, a full-day trip to Dragør by foot in style, if you feel like walking a lot, or at least taking a part of it, e.g. from Kongelunden. I liked a lot the sunset and "blue hour" along the marshy and shrubby strand, passing by the fort-island (which could be an interesting visit on its own), the baths and finally taking the return bus at Hollændervænget (and ending the day in Tivoli, but that's another story). The Øresund bridge, a costant companion on the horizon, is a mesmerising sight. The picture of this maritime, border village is completed by the low contour of Saltholm island, once serving as a big meadow.

The lady at the tourist office told me that they lack nothing: they are just waiting for the formal nomination. On the one side, although I've not been to other renowned coastal villages like Ærøskøbing on Ærø, or on Bornholm, on this road trip I still have traversed and stopped by really many such small towns, and Dragør comes out as one of the most characteristic and better preserved indeed; moreover, it's not made out of the classic Nordic half-timbered architecture, it has its peculiarty. You can grasp how it was shaped by seafaring in its many aspects, and you get to see it as frozen in time at the beginning of its decline (middle XIXth century). However, on the other side I think it's too little and too generic. Maybe the exhibition and its narrative should be improved a bit, or maybe there's not so much to improve, in the end. So, I can recommend it as a nice destination for a half-day, or even shorter, trip from Copenhagen (or the airport! It's just around 15 minutes by bus!), but it's not a must; and not really worthy of inscription in my opinion. Would I be crazy to think of a sort of extension of Kronborg as a witness of trade and sailing through the Øresund? But alone, Dragør is not unique enough, and does not suffice for a WHS.

Photo: private lookout tower to peep at the harbour's activities, in Lodsstræde (end of XIXth c.) 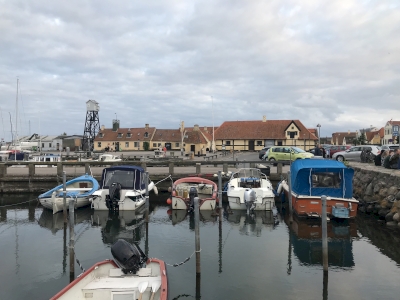 I based myself this summer 2021 for ten days in Copenhagen. Of those ten days I spent about half the time in the City with some great museums and the other half I travelled around the capital region including of course Rosilde and Helsingor, a day trip to Sweden and a evening in Dragor. The latter is a pretty small town south of Copenhagen but the old town is more like a village with a harbor. This area is well preserved with yellow simple houses and cobble lanes. The harbour is quite big filled with leisure boats.  It was nice to stroll around the lanes for half an hour and I had a simple dinner at the harbor. There is not much to see of the former ship industry but a few small buildings in the harbor area. I don't think there is much to see of the "tall ships" and their production and I cannot imagine that the village is unique even for Denmark.

Unesco Website: The Maritime Heritage of Dragør Old Town and Harbour - A ‘skipper-town’ from the era of the great tall ships in the 18th and 19th centuries