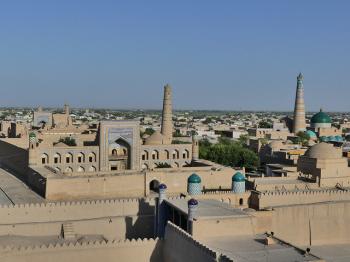 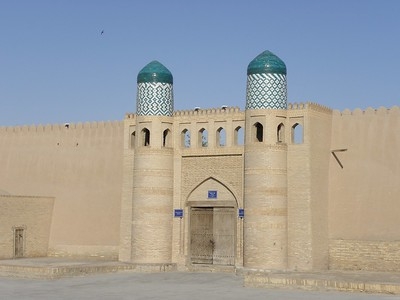 At first sight, the Itchan Khala of Khiva is a deception: an almost empty open-air museum, except for numerous French tour groups with loud guides. Where have I landed? Is this the once so remote oasis town? The monumental walls, gates, and other historic buildings in town look over-restored as well.

Fortunately, I stayed here for two nights, and it certainly grew on me. My hotel (the Arkonchi) is located within the walled section, making it easy to wander around during all hours of the day. Although only early May, the temperatures easily reached 35 degrees Celsius during the day. So the best exploring was in the early mornings and evenings. The rest of the day I spent hanging around in one of Uzbekistan's best features: the chaikhanas (tea houses).

Almost every building in town is some sort of museum or shop (or combination of these two). I just entered them all - sometimes I was disappointed because of the overly commercial atmosphere, but I was pleasantly surprised too a number of times. Highlights certainly not to be missed are the Pahlavan Mahmud Mausoleum (tiled all over and very serene), the Djuma mosque with its 112 wooden columns and the Tosh Kovli Palace. 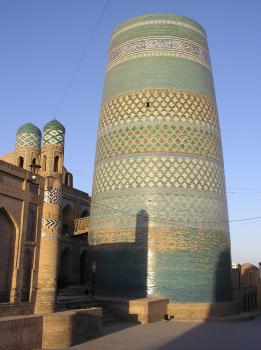 Located in a Former Capital: "It is the former capital of Khwarezmia and the Khanate of Khiva" (wiki)
Hotels in Historic Buildings: Orient Star Khiva, in the Medersa Mohammed Rakhim Khan