Mining Historical Heritage is part of the Tentative list of Spain in order to qualify for inclusion in the World Heritage List.

The Mining Historical Heritage is a serial proposal consisting of 21 locations in nine provinces and regions spread over the entire country. The majority of the mining sites are coal and iron ore mines, but metals such as copper, silver, lead, gold and mercury were also mined. Among the selected sites are also stone quarries and salt works. In the oldest of these sites, mining activity dates back to the Neolithic period. 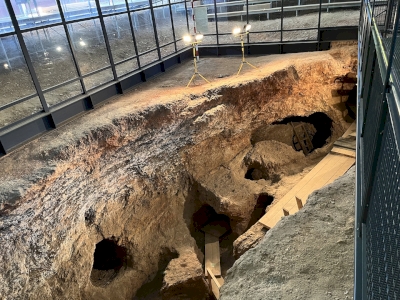 I visited the neolithic Mines of Gavà from Barcelona. Gava train station is easy and frequently to reach by regional train from Barcelona. From there you can walk for 20 minutes or take a bus.

There you find a huge modern building which houses the archeological parc mit a museum and some of the mines entrances. The mines seem to excel in several aspects: They are the oldest (known) gallery mines in Europe (around 6000 years), they are very extended over 200 hectares, and they are the only known mines for a green mineral called varascite that I had never heard of but that was used for body ornaments. The Romans later exploited it further for iron ore. They found several burials in the mine and a few ritual objects such as the Venus of Gavà. While I find this statue interesting and would like to put it quickly in historic perspective: The Swabian Ice age art is around 40'000 years old and more complex and realistic.

The archeologial Parc is basically one big hall where you can see several entrances to mines and there are exhibits about archeological finds and about human development: How humans made tools, developed religious views, started agriculture etc.  I found them quite beautifully done but they aimed largely at children or beginners in this field  and talked more about the general development of mankind than about the local particularities. At the end you can go into a rebuilt mine to get an impression how it felt to work there. While they had rather low ceilings I still figure they were much more comfortably high then the original mines. Also this part was well done but rather simple.

Has this OUV? If they really are the oldest gallery mines in Europe I can see a certain OUV similar to the already inscribed flint mines. But if they are not clearly older then I don't see the necessity that we have a varascite mine on the list though I found the visit in Spiennes not more impressive. About the complete nomination of the "Mining heritage" of Spain I have a very clear opinion: I think it is a disaster since it combines mining sites from 6000 years and in all possible fields of mining with the only common factor that they lie all in Spain. That leaves the strong impression that non of the single elements possesses OUV. As far as I browsed the different (21!) elements of the nomination the ones that stuck out for me (if any) were Gavá for its age and size and Rio Tinto (which I have not visited yet) for is long mining history, the acidity and color of the river and the huge transformation of its landscape. If this nomination should make sense they have to figure out which elements really are unique. 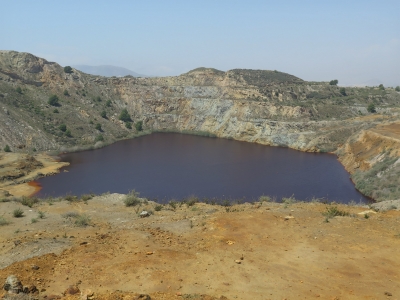 From the heaps of places that are trying to inscribe I visited La Union near Murcia. The first sights I saw were the typical rundown, forgotten and left behind buildings of a mining landscape. I knew I was at the right place. The first stop was at El Rojo, a lake now so red from the acid resulting from the mining. This isn't a tourist spot and the lookout even had a big no parking notice plus the typical danger sign, but it was only a few meters to get a good view. This all wasn't so much to see so there was surely something they are trying to inscribe?

It's a landscape so you get a lot of buildings. Go into the town proper and you can find the old market, a pretty building, and a few casas & villas from former head honchos in the mining industry. I wasn't all impressed but it didn't take much of my time.

I can't speak for all the heritage sites but this seems more of a national importance rather than a worldly one.