The Port, Fortresses and Group of Monuments, Cartagena, comprise the surviving remains of military constructions and an important way station for exploration and trade developed by the Spanish in the New World.

Cartagena, formally known as Cartagena of the Indies is a large city seaport on the northern coast of Colombia. Founded in 1533 by Don Pedro de Heredia, and named after the port of Cartagena in Spain's Murcia region, it was a major center of early Spanish settlement in the Americas.

A few years after it had been founded, the Spaniards designed a defense plan in which the main strategy was the construction of a walled military fortress to protect the city against the plundering of English, Dutch and French pirates.

A visit to Cartagena does leave you with mixed feelings. On the one hand it is Colombia’s most vibrant city which also has preserved its historical core. On the other hand it is so fully geared to tourism that sooner or later you will get fed up with it, trying to fend off the stream of sellers of water and hats and avoid the ubiquitous tour groups. I had about 2 full days there, which I found a good amount of time. When you walk away a bit from the clock tower area and the busiest parts of the historic center, it certainly gets enjoyable. The city also has an accessible and low-key airport with long haul connections, for example to Amsterdam, New York and Lima. The town’s OUV mostly is about its military fortresses and port. So on my first morning in the city I walked via the bridge from the center to the big fort on the other side of the bay. The Fort San Felipe de Barajas opens at 8 a.m. and I was one of the first visitors of the day, so it was very quiet. It is a fort built by the Spaniards in 1536, intended to expel the English from the Colombian coast.

Reportedly, it is the largest fort in South America. But only a small part dates from the 16th century, in the 17th and 18th centuries the structure was significantly enlarged to the large, bulky mass that it is now. There is a system of tunnels under the entire complex. In the former hospital you can watch a 20-minute video explaining in detail how the Spaniards defeated the English fleet. It's already worth going in there for the strong airconditioning.

From the highest point of the fort you have a good view of the city of Cartagena. What is striking is how many high-rise buildings there are - when I came flying in from Bogota it seemed as if we were landing in Dubai. The historic center within the city walls has also not escaped the more modern, higher buildings. They now often keep only the historic façades  and build entirely new hotels and shopping centers behind them. One of the best things to do in Cartagena is walk the city walls. They still are about 70% intact and you can walk on it for most stretches. At sunset I walked the full loop, it is nice to see the city from different angles in this way. I for example discovered the former monastery La Merced and the theater next to it, two fine Italy-inspired buildings.

Another area worth exploring is Getsemani. This is the neighborhood, outside of the city walls but inside the WHS core zone, where the poor people of Cartagena used to live. Here also the uprising against the Spaniards and for independence began. For these people it has now become unaffordable - just about everything here has been converted into guest houses, restaurants, shops and cafés. It is a nice area to stroll through though. Bits of Coral Masonry can still be seen in the walls. I visited it on a walking tour with a small group, but you can easily do it on your own. There are a number of churches and museums as well in the historic center, but I found them overpriced. The entrance fees that you pay here in Cartagena are a lot higher than in the rest of the country. It generally costs 20,000 - 25,000 pesos per attraction (around 5-7 EUR). I entered 2 churches (the Cathedral and the Church of San Pedro Claver), but as in general in Colombia I found the interior of the churches to be not very rich. No comparison to Quito for example! I also visited 2 museums: the Inquisition building and the Maritime Museum. Both are located in beautiful historic buildings and for that you actually have to go inside. There aren’t many original items among the exhibits however, most of it consists of information panels.

Click here to see more of my photos of Cartagena 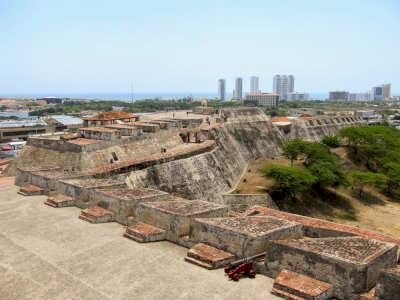 After reading many travel reviews on Cartagena suggesting that less time is better (cost, crowds and hassle were frequently mentioned) we only gave ourselves one full day to see the old town. The highlights can certainly be seen in a busy day but I felt rushed and didn't do all that I'd hoped.

As a strategic Caribbean port for the colonial Spaniards, Cartagena was wealthy and needed protection. A lot of protection. Inscribed as the largest system of military fortifications in South America there are a lot of forts surrounding the bay/port and the wall surrounding the colonial core is still intact and good for strolling as well. We started with a visit to the massive Castillo de San Felipe, the largest and most important of the forts before venturing into the colonial core.  Within, the centre is well preserved and densely packed with narrow streets and more traffic than it needs to have. Maybe it is obvious because of its location but the overall feel is much more Caribbean than South American. Think Havana, not Lima.

We were lucky and didn't have any cruise ships unloading hoards of tourists to overwhelm the centre but it still felt busy and there is no doubt this is the most visited city in Colombia. Trips into the bay or out to nearby islands should give a better perspective of the overall defensive strategy but we didn't have time. I was happy to have gotten a window seat on our flight out with an excellent birds-eye view of the bay to better appreciate how complicated its defense would be.

The day we arrived in Cartagena (Nov. 2010) it was pouring rain. The streets were flooded, traffic was backed up and it was hard to get around. Nevertheless, it was nice to be there during the rainstorm because we saw a unique side of the city. When it rains, the water comes off of the fort in large, cascading waterfalls. Whether that was by design or merely water finding any open outlet, it created a unique and interesting view. The local children gathered under these waterfalls to play and bathe. The old town area wasn't flooded and we spent some time exploring that area, too. The rain also meant that not as many tourists were there and that there were fewer street vendors competing for our attention (although several enterprising ones were selling umbrellas).

We visited Cartegena in the spring of 2009 and took a harbor cruise. We were able to see how the Spanish organized the 8 forts defensively to protect against pirate attacks. The view of the city's skyline in fantastic! We saw the spires of cathedrals outlined against a pristine, blue sky. We could see the building of modern skyscrapers being constructed. And, most impressively, the size of the bay. It is immense! No wonder Cartegena has been an important port for centuries.

Cartagena is a port city known for its giant fort. Think old town San Juan, Puerto Rico or Campeche, Mexico only bigger. The town is extremely well preserved and receives few tourists most likely because of Colombia's violent drug trafficking.

The clean and tidy town is dominated by a huge, well preserved stone fort that can be explored from top to bottom. The streets beneath the fort are a cobbled jumble of colorful two story homes and shops. An elevated promenade along the water (appears to be a built up sea wall) allows you to see all over the historic centre. Spanish colonial architecture influence is evident throughout the old part of the city.

Cartagena contains some beautifully preserved churches and convents in the hills above the town as well as the requisite spanish baroque style cathedral in the city centre.

Cartagena also has some areas that are not tourist friendly but it is generally safe. You need to speak at least a bit of spanish though for an enjoyable visit. Prices are dirt cheap!!

Walled cities
Equestrian Statues: Simon Bolivar (1900), Plaza de Bolivar. The plaza was originally the "Plaza de la Catedral" and later the "Plaza de la Inquisicion". It was remodelled as a park and renamed in 1896 and the statue of Bolivar himself added in 1900
Clock Tower: Puerta del Reloj - early 18th century, converted from a bridge gate
Theatres: Teatro Heredia

Bombarded by the British Navy: March 1741 during the War of Jenkins Ear - with Spain

Sieges and Battles: British 1741 (lifted); 1815, 4 month siege by Spain under Morillo who recaptured the city from the rebels who had declared independence in 1811
The Inquisition: Palace of the Inquisition Plaza de Bolivar
Nine Years' War: The Raid on Cartagena, in April 1697 during the Nine Years' War, by Sir Bernard Desjean, Baron de Pointis and Jean Baptiste Ducasse was a severe blow to Cartagena. The Baron's forces included 22 large ships, 500 cannon, and 4000 troops, while Ducasse's forces consisted of 7 ships and 1,200 buccaneers. They quickly overwhelmed Sancho Jimeno de Orozco's force of 30 men in the San Luis de Bocachica fortification. Then, San Felipe de Barajas also fell and the city came under bombardment. The renowned Spanish defences were not what they had once been, and Pointis conquered both fortresses which defended Cartagena relatively easily, losing only sixty men. Between May 6 and 24, the French plundered the city, accumulating loot valued at ten to twenty million livres.

Sea Ports
Slavery: "The Cartagena slave market, the largest in the New World, was held in the Plaza de los Coches" (orignally Plaza del Esclavo")
Piracy: "In the 16th century alone, Cartagena suffered five dreadful sieges by pirates, the most famous (or infamous) of which was that led by Sir Francis Drake."

Location for a classic movie: The Mission (1986, won the Cannes Film Festival Palme d'Or)
Works by Nobel Prize winning authors: Marquez (1982) - Love in the time of Cholera - fictional place but probably Cartagena
Hotels in Historic Buildings: Sofitel Santa Clara, in a former convent: "a jewel of 17th century colonial architecture which is on UNESCO's list of World Heritage Sites. Gabriel Garcia Marquez used this convent as the setting for one of his novels, 'Of Love and Other Demons'." (hotel website)
Built or owned by Spanish: Cartagena was founded on June 1, 1533 by Spanish commander Pedro de Heredia, in the former location of the indigenous Caribbean Calamarí village (wiki)
Named after a different location: "The city was founded on June 1, 1533, and named after Cartagena Spain" (Wiki)
Foreigner prices: Castillo San Felipe de Barajas: 25,000 pesos for foreigners, Colombians pay 20,000 (2020)
Reportedly haunted locations : Ghostly sightings have been reported at the Naval Museum of the Caribbean, the former San Pablo Psychiatric Hospital and the Santa Clara Hotel.

World Monuments Watch (past): Fortresses of San Fernando/San Jose (Concern over impact on structures of planned deepening of water channel for ships) (2010)
U.S. Ambassadors Fund : Conservation of the 17th-Century Apostle Santiago Rampart in Cartagena (2005)
Memory of the World: Negros y Esclavos archives (2005) details the development of the slave trade in Cartagena (they are now in the National Archive in Bogota)