Cetinje Historic Core is part of the Tentative list of Montenegro in order to qualify for inclusion in the World Heritage List.

Cetinje Historic Core is a town that formerly served as the royal capital and now serves as the center of Montenegrin historical and national identity. The core includes architecture from the 15th century to the present, including the Cetinje Monastery, the Vlach Church, King Nicola’s Palace, the Blue Palace, the State Archives, and several diplomatic missions. Cetinje is known as a “Town of Books”, where books have been printed, read, and preserved since the 15th century, when a printing house was established in the town and the first printed book of the South Slavs was published. 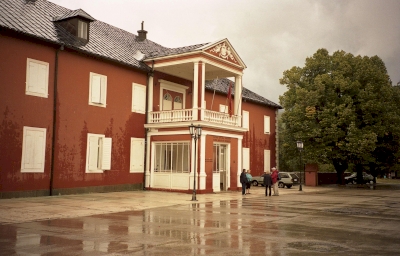 Visiting of Cetinje was slightly disappointing during my visit some 10 years ago, and I think it does not deserve the WHS status.

I did a trip from a touristy Herceg Novi through even-more touristy Kotor to Cetinje as a final destination by a local bus. Well, we originally planned to continue from Cetinje to Lovcen Mountain with mausoleum of former king of Monte Negro on the top and obvious superb views to Boka Kotorska and Mediterranean cost of Monte Negro. Due to rainy and stormy weather, we changed our plans and spent in Cetinje longer time than expected, it means a couple of hours. When we left the touristy coast at Kotor and started to ascend to Cetinje by serpentines in the very steep slope, we entered completely different Monte Negro. Further, it was rainy and fogy, thus the views were rather limited.

Finally, we entered an ugly bus station of Cetinje. We refreshed ourselves by traditional coffee prepared in a cezve in very dark and very non-touristy bar at the bus station, and waited until it stopped raining. After that we walked to the center of Cetinje. The compact core consists of low town houses with typically two, sometimes three floors, but they were not very picturesque and built in no particular style. We had a lunch in mediocre pizzeria there. After the lunch we enter residential quarter of Cetinje with the royal palace (PHOTO) and adjacent always crowded monastery church, which was the most interesting structure in the entire Cetinje. The royal palace is quite small and not very spectacular, and I cannot imagine that this would ever become WHS.

Then, we went by bus downhill to Kotor that is much more interesting destination than Cetinje. 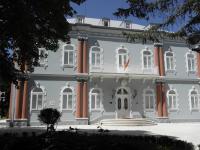 Cetinje was the Royal Capital of Montenegro from the 15th century until Montenegro's incorporation in Yugoslavia after WWII. It is considered both a cradle of Montenegrin culture and a Serbian Orthodox religious center. The official residence of the Montenegrin President is also here (see photo).

I visited Cetinje on my way between Podgorica and Kotor. Buses between the two cities will stop here, so it's an easy break. I walked around town for 1.5 hours, and was really surprised about the good state of most of the monuments. Especially the villas and old embassies are worth seeing. The town has a Central European atmosphere, a bit like Kutna Hora or Cesky Krumlov in the Czech Republic.

Most people come to see the Cetinje Monastery, which is the seat of the highest / largest diocese of the Serbian Orthodox Church in Montenegro. Its church holds an important relic: the right hand of Saint John the Baptist! Maybe it fits the part of the arm that is kept in Valetta, Malta. I did not see it, as I would have to wait with dozens of other foreign tourists in the inner courtyard for a group visit to start. I don't like to be treated as a sheep, so I just walked on.

I am not aware that the Montenegrin government is preparing any WH nominations, besides taking part in the transboundary Stecak/Stecci nomination (which in essence is Bosnian history). But from the current Tentative List Cetinje must be the most promising candidate. It profits already from its position close to the beach town of Budva, and many tour buses visit the site daily.