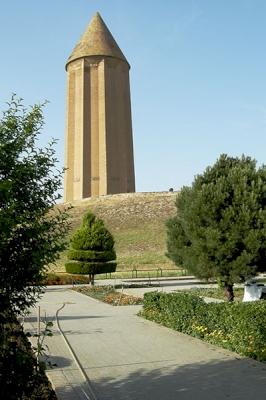 The Gonbad-e Qābus, meaning “Dome of Qābus,” was visited on Friday, 16 May 2014, on a three-day extension of a guided tour of Iran. It had been the subject of an art history master’s degree thesis in 1966, so there was a long term wish to visit what is said to be Earth’s tallest tower of unglazed, fired brick and one the the earliest Iranian monuments bearing its date and the name of the Ziyarid dynasty emir responsible for its construction.

The tower was first designated a protected monument under Iran’s Law for Protection of National Heritage in 1930. In 1975 it was cited by the Iranian Cultural, Heritage, Handicraft and Tourism Organization (ICHHTO) as number 1097. In 2012, it was declared a UNESCO World Heritage Site with the number, 1398.