Golestan Palace is the most recent construction on the timeline of Iranian WHS, dating from the 19th century Qajar dynasty. It also is possibly the only real attraction of Tehran - a metropolis of 10 to 15 million inhabitants. Because of its location in the capital’s city center, it is the most visited Iranian WHS among our community after the ones in Esfahan. Still this results in only a meagre 696th spot overall. Despite its relative fame, the palace is not so easy to find for an individual visitor. It lies just off a main boulevard, and is completely surrounded by much higher government buildings from the 1960s and 70s. The construction thereof by the government of the last Shah was made at the expense of older buildings belonging to the Golestan Palace (such as a theater).

When you finally find yourself at the entrance gate, there’s a big decision to make: how many of the 8 buildings/museums warrant a visit? Because on top of the 2x 150,000 Rial entrance fee to the grounds and the main buildings, there are additioneel fees of 80,000 each for the others. I decided to settle for 3 extra tickets: to the Building of the Windcatchers, Edifice of the Sun and the White Palace. It turned out that the actual tickets do not mention a specific building, so in the end you can always switch to another one if that appears more interesting. I first did a full lap around the palace grounds to photograph the lovely tiled exteriors of many of the buildings. There are fierce Mongolian-type warriors, European-inspired landscape motifs, funny men in Persian (or Turkish?) uniform and even portraits of two women with deep cleavage (“no mullahs at the time”, I overheard an Iranian guide saying). The two most beautiful objects however I found the two yellow-white marble artworks that are exhibited half in the open air: the huge Marble Throne (no longer hidden behind a curtain) and the tomb of Naser ed-Din Shah.

I wasn't too charmed by the additional buildings that I entered and had bought the separate tickets for. The White Palace now is in use as an ethnographic museum. It is advertised as "one of the most interesting ethnographic museums of Iran", but there’s not very much to see except some traditional costumes. The Building of the Windcatchers was very disappointing. I had already seen a functioning badgir 5 years ago in Bahrain: they are meant to 'catch' the wind and turn it into natural ventilation in a building. Unfortunately here in Golestan you cannot enter the the towers itself.

I quietly walked around for two hours, and occasionally sat on a bench for some people watching and to enjoy the peaceful atmosphere. The palace has a large courtyard / garden (even with a café with terrace!). My feelings about this WHS are mixed: the many halls are clearly European-inspired and often very flashy, with lots of mirrors and 19th century furniture. But these strangely tiled walls I found very fascinating and unique to Iran. 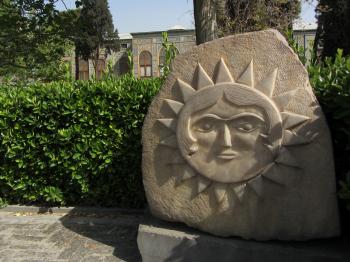 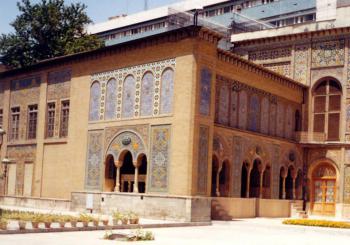 Located in a Capital City: Teheran (Capital of Iran)