The Historic Monuments Zone of Querétaro is a well preserved Spanish colonial town with its specific 17th century street plan and a number of 18th century rich post-Baroque monuments.

The layout of the town was split in two: a rectilinear street plan for the Spanish settlers, and small winding streets for the quarters of the indigenous population.

The most prominent feature of the city is its enormous aqueduct, consisting of seventy five arches, each twenty meters wide with a total extension of 1,280 meters and an average height of twenty three meters. It was built by the Marquis Juan Antonio de la Urrutia y Arana between 1726 and 1738.

Queretaro I found the least interesting one among the Spanish-colonial cities of Central Mexico. It seems quite an affluent city though, probably nice enough to live in. I understand that it has quite a lot of people from Mexico City move there for better living circumstances. If you're driving around Central Mexico hunting for WHS, Queretaro is a convenient stop and I spent one night here. Did my sightseeing in the afternoon - it took me two hours to find my way around the several tree lined plazas and look at some churches. The nicest is the Santa Rosa de Viterbo: it has really weird, curved buttresses (see large photo above). As we're working right now on a Top 50 Missing list on the Forum of this website (for sites that mysteriously haven't made it into the WH list yet), we could also introduce a Top 50 Removals: sites that have made it in when noone from an AB or the WHC seems to have been looking. Queretaro surely would get my vote for that list. 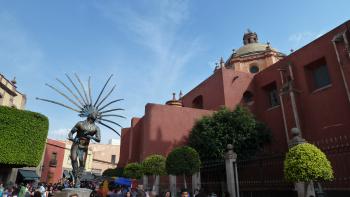 We only had a quick stop for lunch on New Year's Day 2015. As such there were a large amount of families out celebrating their day off. It leant the centre a really friendly and welcoming atmosphere but also meant the city's churches were closed.

As with other reviewers here the highlight was the weird church of Santa Rosa de Viterbo which seemed to show a quirky indigenous take on traditional European baroque architecture.

A stop in a cafe and a reviving empanada helped fuel us as we strolled around the pleasant squares dotted throughout the centre.

It provided a welcome break on our trip up the Camino Real and I think it would be a pleasant place to spend a bit more time.

Queretaro, beautifull city. When you talk about Queretaro, you are talking about one style. The baroche of Queretaro is different from others...maybe more exquisite, tasteful and deeper. Queretaro had been a baroche laboratory. Santa Rosa de Viterbo Churche is a great sample of that. One of the nicer buldings in Latin America is the San Agustin convent, today a museum. Divine......exquisite, refined.....

The waterduct with the colection of urban funtains give the city an especial atmosphere. 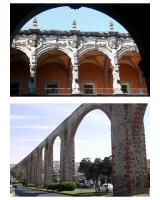 Queretaro undoubtedly has a pleasant city centre. Its calmness belies its situation at the heart of a growing conurbation of over 1 million people. That said, in terms of suitability for UNESCO inscription, I regard it as the “weakest” of the inscribed provincial historical cities in Central Mexico which we have seen. And (whilst not being the ultimate arbiter on such matters!) Michelin only grants it 2*, (together with Zacatecas and Morelia) compared with 3* for Guanajuato, Puebla and Oaxaca.

The “edge” which Queretaro claims over other Colonial “Centros historicos” lies (Quoting from the ICOMOS evaluation) in its being a “remarkably hybrid town”. We are told that “some commentators talk of a harmonious way of life or cohabitation between the 2 cultures”. Apparently 2 distinct layouts can be seen in the city’s plan – 20 blocks on the Spanish side of rectangular grid and 30 blocks on the indigenous side with curved and irregular streets! This, we are told, foreshadowed “the bicultural Mexico of today and the emergence of a new form of coexistence in the New World” Hmmmm? I am afraid I regard this as a lot of politically correct wishful thinking! I can see the slight differences in street layout on the map but, as we walked around, the distinction certainly didn’t herald any great change in atmosphere. In any case would it justify inscription even if it did?

The centre possesses a number of attractive buildings but Michelin identifies only 3 structures as justifying 2*.

a. The St Rose of Viterbo church. This is indeed an impressive structure from inside and out. It is situated a few blocks away to the SW of the main historic area and should be visited – its massive flying buttresses are particularly striking.

b. The cloister of the Art Museum (photo 1). This building was originally a monastery and the caryatid statues are worth looking at in detail

c. Its most famous structure - The Aqueduct. (photo 2). This was built around 1726 at over 1 km long. It isn’t absolutely clear whether it is included in the definition of the “city centre” but I guess it must be. It now sits in the middle of a busy 4 lane highway and is clearly heavily restored but still manages to impress as a fine piece of civil engineering. The problem of water impacted a number of the new cities in Mexico - Morelia and Zacatecas each has its own Aqueduct remains but none is as “complete” as Queretaro’s.

There are a number of other interesting buildings. We rather liked the “Casa de la Marquesa” – a lovely mansion in Moorish style now a Boutique hotel” But, generally, apart from the Aqueduct, the city buildings are relatively “low key”.

Even in 1996 ICOMOS didn’t seem 100% convinced :- “The case for the inclusion of Queretaro on the World Heritage is a strong one by virtue of its original unique town plan and the quality of its buildings. The nomination does however raise the general problem of Spanish and Portuguese colonial towns in the Americas, a number of which figure in Tentative Lists submitted by states parties in the Americas” ICOMOS then recommended a “Comparative analysis” of such towns to help it in considering the many others which it could foresee! As far as I can make out, this eventually emerged in 1998 as a report – "The Urban Architectural Heritage of Latin America". Written by an Argentine, it foresaw a very large number of towns across Latin America being inscribed (including 6 or 7 in Mexico)!! I found it inconclusive, poorly argued and somewhat muddled. I particularly liked the following phrase "In this case it would be sufficient to restrict the criterion for nomination to those towns that maintain high standards of excellence with regard to the heritage and which could also be integrated into a cultural tourism circuit". This perhaps proved too open ended for ICOMOS and it seemed to get no further! It was, in any case overtaken by 2004 document "Filling the Gaps". From that long document I select 2 quotes

a. “In Latin America, there is relative abundance of references to the Spanish colonial period, while some of the indigenous cultures are still not represented”.

b. “All States Parties should be especially rigorous in their selection of certain well-represented categories of property”

I suspect that Latin American colonial towns might find it a bit harder in future to gain inscription and that Queretaro did well to get in when it did!

Querétaro
Querétaro: Historic centre of the city of Quer

Places of Execution: Emperor Maximilian was executed in 1867
Treaties: 1848 peace treaty with the USA, 1917 National Constitution

Visited by Alexander von Humboldt on his travels: Aug 4 1803

Augustinian Order: Former monastery of St. Augustine, now the post office
Dominican Order: Templo de Santo Domingo was founded by the Domincans
Jesuits: Reales Colegios de San Ignacio y San Francisco Javier were both founded by the Jesuits.
Franciscans: La Santa Cruz
Cathedrals: Church of San Francisco served as a Cathedral until 1921 when it was chaged to San Felipe Neri. Both are within the WHS boundaries
Legends and Folk Myths: Chronicles of this event [the battle between the natives and the Spaniards], such as that written by Friar Isidro Félix de Espinoza, state that the natives were at the point of winning when a total eclipse of the sun occurred. This supposedly scared the natives and the Spanish claimed to have seen an image of Saint James (the patron saint of Spain) riding a white horse carrying a rose-colored cross. This event caused the natives to surrender. (Wiki))
Sacred Mountains: Sangremal and which was called Ynlotepeque and considered sacred in pre-Hispanic times.

Built in the 17th century: "It is also endowed with a wealth of outstanding buildings, notably from the 17th and 18th centuries" and "It is the buildings erected du ring the economie heyday of the town in the last quarter of the 17th century which gave Querétaro its present-day appearance"

On Banknotes: Queretaro; 5 Peso; 1969
Minority communities: Indian quarters - Otomi, Tarasco and Chichimeca
Built or owned by Spanish: The foundation date of Querétaro is pegged to 25 July 1531, which is when Spaniard Hernán Pérez Bocanegra y Córdoba arrived with the allied Otomi leader Conín (wiki)