“Birthplace of Jesus: the Church of the Nativity and the Pilgrimage route, Bethlehem” is a major Christian pilgrimage destination and the center of the Christmas celebration.

It holds the Church of the Nativity, which was built over cave that is considered to have been the birthplace of Jesus. 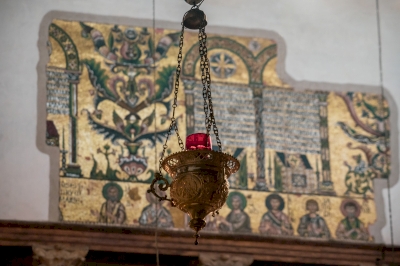 I arranged for a private half-day guided tour of Bethlehem in November of 2019, which included not just the Church of Nativity, but also a drive through the governorate countryside, several viewpoints, a visit to the Shepherds Field, and a stroll through the center of the town of Bethlehem.

Church of the Nativity itself is not unlike the Church of the Holy Sepulchre in Jerusalem, in that it is a major pilgrimage destination that is shared by several Christian denominations. The Bethlehem church is less of a madhouse, though; the stream of visitors is steady, but nowhere near the volume you find at the Holy Sepulchre. You can view the remains of the floor mosaic of the original church from the 4th century, and descend to a number of secondary grottoes where you may even have the space to yourself. With the Nativity Grotto, I profited from having a local licensed guide by being allowed to enter the cave on the “exit” side, thus bypassing the long line of pilgrims who wait a couple of hours to be able to get close for just a few seconds to the spot where Jesus was reputedly born.

This is obviously a place much more meaningful to devout Christians than it is to any secular person or otherwise non-Christian. I don't believe the church is exceptional on its own merit, and its obvious from reading the inscription that the recognition is based primarily on the church's symbolic value to the Christian world. Your mileage may vary in regards to whether this raises to the level of OUV.

Private guide is clearly the expensive option for visiting Bethlehem; there are options with Israeli guides and Palestinian ones, and if you have concerns about the safety of crossing into Palestine in general, having a local guide may help alleviate those concerns. There are also plenty of group tours daily from Jerusalem or Tel Aviv. But technically, you can visit Bethlehem on your own by crossing Checkpoint 300 to the south of Jerusalem and then hiring one of the many taxis that wait for customers on the other side. 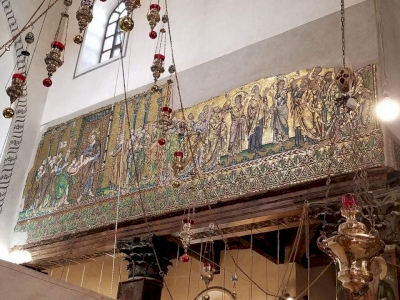 I visited Bethlehem in May 2018 on a day trip from Jerusalem. Its Church of the Nativity is one of the holiest sites of Christianity in the world, probably only second to The Church of the Holy Sepulchre in Jerusalem. As a Christian, it was definitely a no-brainer to go and see it for myself. The complex is made up of several churches and religious structures, but I only visited 2. First was the Church of St. Catherine, the Catholic church. It was a simple neo-gothic church painted in bright colors. Nothing much to see here, but the caves under the church were once refuge for St. Jerome, and are continuations to the one where Jesus was actually born, which is right under the Greek Orthodox Church of the Nativity. Speaking of which, it's right next door, and a small side entrance connects it to the courtyard in front of St. Catherine's. One has to bend over to get in, which makes it really practical to bow in respect of the holiness of the place. It was also used to keep horses out of the church. Once inside, it's really disorganized. This is one of the oldest churches in the world, and likewise, the nave is lined with Roman columns. In front is the characteristic Greek Orthodox altar, with its red and gold lanterns hanging from the ceiling. The walls are plastered bare, save for a few stretches of brilliant gold Byzantine mosaics. It's a really characteristic and obviously historic, though not necessarily pretty, church. Of course, I lined up for the chance to touch the star signifying the spot where Jesus was born, and that was a really indescribable spiritual experience. In the end, Bethlehem is of undeniable significance to the world, as it's the birthplace of one of the history's most influential figures, and it still shows today in the form of the churches and pilgrimage culture of the site. The site by itself is as unique show of history, though not necessarily in the best state of preservation or aesthetics. It showcases not just the origins of the site, but the effects of more recent cultural influences, and with a level of integrity greater than other pilgrimage sites I've visited in the area, like Nazareth, Bethany beyond the Jordan, or Ein Karem. It may not compare to nearby Jerusalem, or the old churches of Cairo in that respect, but Bethlehem has its own undeniable significance in the world. Gold mosaics never hurt, either.

Forget for a moment the church's obvious significance as Jesus' birthplace, this Christian structure has, due to both luck and the perseverance of many dedicated parties, remarkably remained standing almost 1,500 years later in this often tumultuous region. History has a price -- the wear and tear has turned the Church of Nativity into what might very well be the ugliest major church I have been to, but this intangibility is also the crown jewel that puts this place on the map. Millions before me have made this pilgrimage to this humble outpost and millions will continue to do so after me. 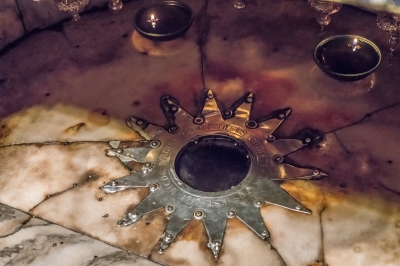 Traveling to Bethlehem from Jerusalem is not difficult if you are not an Israeli. There are some restrictions when going into the Palestinian Territories, and your van might get searched crossing the border, but dozens of buses and tour groups do this every day and it is quite normal. There are currently no safety issues going to Bethlehem.

Most groups visit the Church of the Nativity and leave. There is more to see in the area including the Milk Grotto and Star Street.

The church is very old. The current building was built in 565 by the Byzantine Emperor Justinian. Over the centuries there have been many restorations and repairs to the building, including a recent restoration which took place in 2017.

The birthplace is in a very small alcove under the main altar area. There is usually a long line to visit the spot which is marked by a silver star, which is shown in the photo above.

The door into the church is also ridiculously small, so you will have to crouch to enter the church. This was created several hundred years ago to prevent horses from entering the church.

Although in December 2015 political situation in Palestine is not very stable and media report about safety threats, I decided to visit Bethlehem with my family (including two babies). From Damascus Gate in Jerusalem we took bus 231 directly to Bethlehem (8 NIS per adult) and after about an hour, without security controls, we reached this place. The Church of the Nativity is not very far (definitely in a walking distance) from the bus stop, but we also wanted to visit some other places in Palestine, so we took a taxi.

Although in ‘normal’ times the Church is crowded with tourists, two weeks before Christmas 2015 it was nearly empty. We did not need to stand in a queue and went directly to the basilica. Unfortunately, interior of the basilica is under overall renovation and all area is covered by scaffolding. Works are even in the Grotto, which however kept its unique character. Near the basilica I recommend visiting St. Catherine church and its courtyard.

We returned to Jerusalem on the same bus 231, this time with detailed control of Palestinian citizens (we, as foreigners, did not even show our passports). Overall, I liked Palestine very much, we did not feel unsecure in any moment and everybody was friendly (our taxi driver was really happy that foreigners visit Palestine and each time he mentioned foreign tourists he named them courteously ‘dear visitors’). 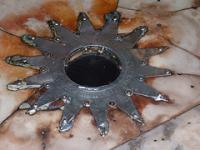 Very interesting to visit is the Church of the Nativity. However, the highligh of this WHS is that so many different or closely related faiths interact with one another in the main square and use the same place to worship the same God! Apart from the WHS though, the situation in the region is very sad and I won't be visiting Israel or Palestine again before the Disgraceful Walls are demolished.

I visited in Bethlehem in January 2011 and of course the main site there is the Church of the Nativity. When I entered the church (through very small door) there was service still going and the priests (or monks) were singing and incense was smelling strongly. Because the priests were inside of the Grotto of the Nativity their singing was echoing mysteriously around the church. Very mystic atmosphere. After the priests left somewhere through a secret door I went to see the grotto myself. Smell of incense was very strong and I had hard time breathing. I watched some time how people kissed the spot where Jesus was born and then walked around the church complex. When big Russian tourist group arrived I decided to leave the church.

As this is the most holiest place in Christianity I think it deserved the World Heritage Site status. The Church of the Nativity itself isn't really spectacular looking and also inside it's quite simple but the history is the thing that matters here.

Inscription after an ICOMOS "not inscribed", by a 13 to 6 majority in a secret ballot

Inscribed on an emergency basis

Birthplace of Jesus: the Church of the Nativity and the Pilgrimage Route, Bethlehem

Mosaic restoration at decaying Church of the Nativity

Mosaic art: The church features golden mosaics covering the side walls, which are now largely decayed. ... a trap door in the modern floor which opens up to reveal a portion of the original mosaic floor (Wiki)

Ibn Battuta: "On my way there [Jerusalem] I visited Bait Lahm, the birthplace of Jesus -- on him be peace -- where the trace of the palm trunk is still to be seen surmounted by a vast edifice."

Armenian Orthodox Church
Christian Pilgrimage Sites
Greek Orthodox churches outside Greece: The main Basilica of the Nativity is maintained by the Greek Orthodox Patriarchate of Jerusalem
Christian Churches in non Christian countries: Christians comprise less than 4% of Palestinians living within the borders of former Mandate Palestine today. They are approximately 4% of the West Bank population, less than 1% in Gaza, and nearly 10% of Israel's Palestinian population. (wiki)
Pilgrimage route
Franciscans: The site also includes Latin, Greek Orthodox, Franciscan and Armenian convents and churches....
Mentioned in the Bible: It is first mentioned in ... the Bible as the place where the matriarch Rachel died and was buried "by the wayside" (Gen. 48:7). (wiki), and 38 times more

Built in the 4th century: The Church of the Nativity was originally constructed in 399AD (AB ev)