The Archaeological Site of Carthage comprises the remains of an influential commercial city and port from Antiquity.

Founded by Phoenician colonists around 814 BC, the prosperous city became the cradle of Punic civilization and the major maritime power in the Mediterranean. It produced figures of historic and literary renown such as the military commander Hannibal and the clever Queen Dido.

After it destroyed the city in the Third Punic War in 146 BC, Rome founded a colony at the same site. The city blossomed again in the 1st century AD and many monumental structures were built such as a large amphitheater. It became one of the three most important cities of the Roman Empire and a center of early Christianity. 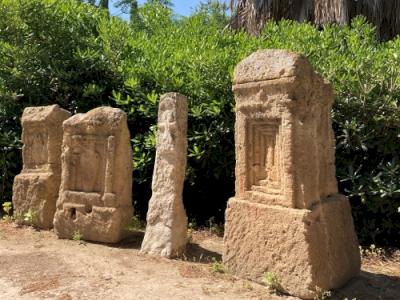 I'm not even bothering to look for fitting pictures. The site is spread out far enough that on foot you may not cover all especially as some require crossing roundabouts, but you should do the bath, villas, amphitheater and the museum. They are all covered by one ticket.

I took the train from downtown Tunis all the way across which costs hardly anything and takes for 30 minutes. Your stop will be very close to the baths.

Overall there isn't much left of the place and I've seen much better ruins. As far as I understand, and don't take my word for it, the city was destroyed in favor of keeping Dougga. It's historically still important but not impressive.

Highlights were more to see the rich area of Tunisia and great lunch at the Tennis club just nearby the museum. 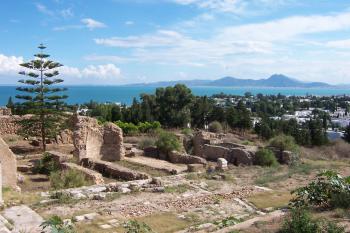 Ministry of Cultural Affairs: The Amphitheatre of Carthage

Exploring the ruins of Ancient Carthage

Cenotaph: Saint-Louis cenotaph on Byrsa Hill: the sculpture of a recumbent figure (Saint Louis of Carthage)

Sieges and Battles: Romans 149/6BC
Phoenician world: Founded by the Phoenicians
Pisan colonies: Between 1030 and 1035 Pisa went on to successfully defeat several rival towns in the Emirate of Sicily and conquer Carthage in North Africa. (wiki)
Located in a Former Capital: Carthaginian Empire, 814BC-146BC
Specified on Herodotus' Oikumene
Punic Empire: The city developed from a Canaanite Phoenician colony into the capital of a Punic empire which dominated large parts of the Southwest Mediterranean during the first millennium BC. (wiki)
Mentioned by Pliny the Elder: Chapter 6: Great Carthage

Opera: Les Troyens, Berlioz & Dido and Aeneas, Purcell
Former Largest Cities: Around 300 B.C.
Famous Love Stories: Dido and Aeneas
On Banknotes: Hannibal and Carthage on the 5 Tunisian dollar note
On Coins: The double Punic harbour of Carthage is on the 2 Tunisian dinar coins.