My Son Sanctuary was the religious centre for the capital of the Champa Kingdom. The majority of it was built in the 10th century. It lies in a valley surrounded by mountains.

The site is an illustration of the Champa Kingdom, an important phase in the political and cultural history of South-East Asia. Started as an independent state in 192, Champa came under influence of the Hindu religion. Hindu architecture was introduced from the Indian subcontinent, and many temples to Hindu divinities were built. From the 13th century the kingdom declined and it ceased to exist in the 15th century.

The inclusion of this site is complementary to Angkor, Pagan and Sukhothai.

Map of My Son

My Son's strong points are its remarkable history and its jungle setting. I visited it on the back of a moto from Hoi An, an hour's drive away. During the day busloads of tourists are dropped off here, probably overcrowding the site as it is pretty small. I arrived at 8.45 a.m., when there were maybe 10 other people around. To get to the site, you have to walk on a path through the jungle for the last couple of hundred meters - a real pleasure in itself, finding something so wild in heavily populated Vietnam. I heard many birds, saw wonderful butterflies and hummingbirds. The temples are really ruins, only at the first part of the complex (groups B and C) they are standing upright though also heavily damaged. The damage comes from bombing during the Vietnam War (you can still see the craters), but also from age. Most of the interior decorations and sculptures have been taken from here to the Champa museum in Da Nang. Only a couple of them are on show now here, at temples D1 and D2. From these sparse remains one can only guess how they might have looked like in their heydays. Because of the damage and I think also because of the use of brick, the temples look pretty crude. Most of the outerlying temples are even worse off: they are overgrown or blown up into bits and pieces.

I visited My Son Sanctuary in July 2016 as a (half) day trip from Hoi An. I had seen the temples at Angkor Wat but my wife and kids didn't see anything similar yet. For them it was the first time to see "this kind" of structures. I arrived before 10AM; allmost no other visitors. I recommend to first walk around to get a good impression and photos without the crowds.

Some part is good preserved but many is destroyed by the American B52 bombing. It was however still possible to see a lot too. I visited with a guide who could explain everything in detail. This really helped allthough normally I visit alone. It's an hour drive from Hoi An and the landscape is totally different: jungle! It's how all of Vietnam once must have looked like.

At certain times there were performances of local dance. Especially for the kids this was very welcome to see after the many brick piles. We had a great time learning about the Champa Kingdom. See some photos on my travelogue. 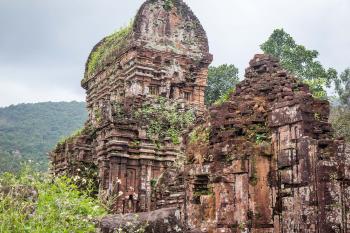 The site has been (generally) well preserved and you can get a really good sense of the ancient city that used to be here. Although it is easily accessible from Hoi An, it does feel like it's in the middle of the jungle and that adds an air of mystery to it. While most of the artefacts that could be moved, have been - there are still quite a few statues that are part of the building.

I had a guide for my visit and that was worth it. I learned a lot about the Champa people and the way they put this place together. There is some work going on to restore some of the temples. Others that were bombed are probably impossible to salvage.

I enjoyed this site and it was quite different to most of the other WHS's in Vietnam. While not nearly as impressive as Angkor or Ayutthaya, they all fit together into the history of this region. 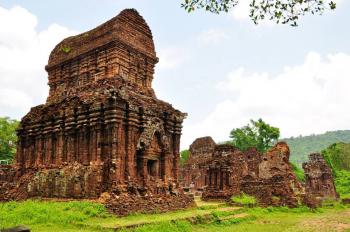 Hidden away in the tropical forest near the port city of Danang and the very popular World Heritage town of Hoi An is the Champa civilization’s sacred valley of My Son, pronounced like Mee Cern, or beautiful mountain (from Chinese word Mei Shan). I joined the full day package tour from Hoi An which was quite very convenient as it included all transportation, ticket fee, lunch and guide. I arrived in My Son around 10 o’clock. The recently built interpretation center funded by a big Korean company was the first thing I saw, but the guide dictated us to go in a different direction into the forest. After walking for a while I found the complex of tourist facilities, and one of them is the performance hall. The loud traditional music and cheerful sound of Chinese tourists really caught my attention, as I read many comments about sexy Cham dancers before I came here, but again our guide insisted us to keep going into the forest. Within few minutes I started to see the complex of ancient Hindu temple made from brick.

At first the dilapidated state of the complex was quite shocking, and almost nothing left to see. I decided to discover the site by myself after my guide started to explain how cruel of French and American during colonial rule and Vietnam War. I started to impress the amazing quality of brick craving details. The image of Hinduism guardians and angels are truly beautiful and reminded me Angkor in Cambodia. For me My Son is the great evidence of how Southern Indian art expanded to Southeast Asia since ancient Cham people came from Java where Indian art flourished, such as Prambanan, and later expand to modern day Viet Nam and later Cambodia and Thailand. The construction method of My Son is also very unique, Cham people built a whole block of bricks then burned them to make the whole brick block very solid and strong then chiseled into the temple. I walked around the complex many times to enjoy its intricate motifs until the guide informed that there are more complex to see. The next complex was said to be the biggest of My Son, but currently almost nothing there since it was bombed by American after Viet Cong used My Son as their base. Judging from old photographs and sketch from a French archeologist, the destroyed temple was a real gem of Cham architecture that shows strong influence on later Angkorian arts.

I went to see another complex, this one located on the hill and recently partial rebuilt by a group of Italian archaeologists. The rebuilt complex is very lovely and illustrates the original layout very well even though the new brick really contrast with the old ones. Then I further saw another group of temple, this one is very interesting and special as the bomb craters are clearly visible showing that how the main temple had been destroyed, but also at this complex that the full stupa of minor temple has successfully been rebuilt by Italian team and they are planning to rebuild more which is a very good news for My Son preservation. After that the guide took me back to the bus and back to Hoi An, it was exactly 3 hours inside My Son. Despite the bad state of preservation, I really enjoyed my visit to My Son, the place exceed my expectation and even small complex can clearly show its value as a bridge of cultural exchange between India – Java and mainland Southeast Asia especially the great Angkor. Another unique of My Son is that its location is the place where Sinic World and Indian cultural sphere meet which make My Son to be the only Hinduism World Heritage Site in Sinic countries currently.

Pretty neat place to visit. We rented a motorbike from Hoi An and make the trip out. It was great to be on a bike and not on a bus. The ruins are impressive although we didn't have enough time to see them all. I would recommend the trip, even just to ride through the more rural parts of the countryside outside Hoi An. Some photos of the ruins here - mackieimages.smugmug.com/photos/604451102_RAzoT-M.jpg. Browse through the gallery to see more.

The children who I took to Myson had helped me to prepare a book named "Myson- World Heritage In Young Hands To Know Cherish and Act". They contribute with interesting ideas, nice poems and wonderful drawings on My Son. Thanks to Funding support from Global Heritage Fund, the book was published, given free and warmly welcomed by school children. We are searching more support to republish as the first publishment was only in small number, 1500 copies.

We visited the Cham ruins in My Son in September 2005. The site is very well maintained and work is still in progress to restaur and improve the ruins. The ruins might not be as big as the ones in Angkor, but they certainly have an equal amount of historical value. I would recommend to everyone to visit the site when they go to Vietnam.

Soldiers discovered bombs and mines on 9.5ha of land surrounding the My Son Sanctuary, which are a danger to locals and tourists alike. (14.01.08)

Restored by anastylosis
Built in Laterite

Stelae: Scholars have found approximately 32 steles at Mỹ S?n, dated between the 5th and the 12th century A.D

Damaged in War since WWII: By American Bombing During Vietnam War in 1969
Landmines: Nom file "In August 1969 the sanctuary itself was heavily bombed, causing great destruction. After the war the area was progressively cleared of mines and unexploded bombs and shells."... " In 1981, with the help and technical assistance of the Polish Government, the first action was taken to clear the area of mines and restore the main monuments, damaged by years of war and neglect"

Hindu Sites in non Hindu countries: Cluster of abandoned and partially ruined Hindu temples constructed between the 4th and the 14th century A.D. by the kings of Champa. The temples are dedicated to the worship of the god Shiva as he is known under various local names, the most important of which is "Bhadresvara."

Built in the 10th century: In the later 10th century, most of the finest surviving architectural monuments were built there.