Mycenae and Tiryns were the two greatest cities of the Mycenaean civilisation. Between 1600 and 1200 BC, its kingdom was the most powerful in Greece. Homer, in his Iliad and Odyssey, spoke of it as "rich in gold".

Mycenae consisted of a fortified citadel and surrounding settlement. Its walls were 13 meters high, and 7 meters thick. The walls of the city of Tiryns are even more immense: in parts they are 20 meters thick.

The Myceneans prospered through their trade with eastern mediterranean neighbours like the Hittites and Egyptians. Around 1200 this all came to an end, and the palaces were destroyed.

Map of Mycenae and Tiryns

I was in this area at St. Stephens Day, the day after Christmas. All archeological sites would be closed, but I decided to go there anyway (hoping to catch a glimpse from the outside).

First stop is at Tiryns. Walls, very thick walls, that's what you see. I park my car at the closed entrance and decide to take some pictures from different angles. All solid rock as far as I can see. When I walk away from my car, a little barking dog appears. Those stray dogs are a frequent sight in Greece, and I am not at all happy with that. Five minutes later the little barker is joined by a bigger friend, a German shepherd. They both stand barking and growling between me and my car. No other human being within sight, I walked away to regain courage. A few minutes later I try it again, coming from a different angle. The dogs seem to have forgotten about me so I can sprint to my car. But I got my pictures! Ancient Mycenae is an hours drive away. Lovely surroundings this time: brown hills, green olive trees. And those walls again. But the outlayings of a city are recognizable this time. Here an old man keeps guard. A good look from the outside will have to do. The tholos-tombs can be seen from the road: there, in graves shaped like beehives, the Mycenean royalty was buried. I would have liked a closer look at Mycenae, but am not dissatisfied what I managed to see after all. 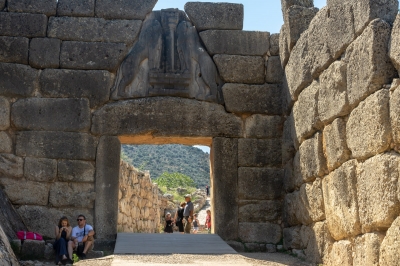 I visited Mycenae in July 2018. The city was the center of the Late Bronze Age civilization that was the main precursor to the classical Ancient Greek culture. Mycenaeans’ period of domination over the Mediterranean came around 1600 BC. Little visible remains of that glorious period, though; Mycenae is mostly piles of rocks, with very few surviving discernible features, making a site like Delphi quite well-preserved by comparison (of course, Delphi is about a whole millennia younger).

In fact, the signature surviving feature of Mycenae greets the visitors at the very entrance to the city – the Lion Gate, dating from around 1250 BC. Beyond the gate, the site is mostly parts of walls, overgrown foundations, and a couple of grave circles; the city’s dominating position over the Argolid Plain offers sweeping backdrops. Since there is little left to preserve on the site, very few areas are out of bounds to the visitors. This goes really well with the smaller children, who can replace the boring exercise of looking at the rocks with a much more exciting exercise of climbing on and over the rocks.

The onsite museum's collection of artifacts is simply exceptional.

Mycenae is located on Peloponnese a little over an hour and a half drive from Athens. The site itself can be seen in under an hour; the museum will require at least another hour, if not more. The tomb of the mythical king Agamemnon is a separate site a short walk away. Tiryns - the other location of this WH property - is located about 20 minutes away by car. We drove past it on the way to the seaside town of Nafplion. From the road it looked to be a smaller site and definitely much less crowded. 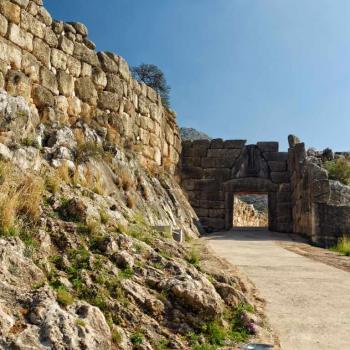 I visited Mycenae in October of 2016. I went on a day tour from Athens that went to Epidaurus in the morning and Mycenae in the afternoon. I don't think this was enough time for the site, as I had to skip the museum and didn't get to see Tiryns. I would recommend giving Mycenae and Tiryns a full day if you have the time.

My favorite part of the visit was climbing to the top of the Citadel and seeing out across the countryside.

I recently did an interview with John Bennet from the British School at Athens. He works on Mycenae and has a lot of interesting information about how they choose to do future archeological digs and how it was rediscovered as an archaeological site in the 19th century. The interview is here: 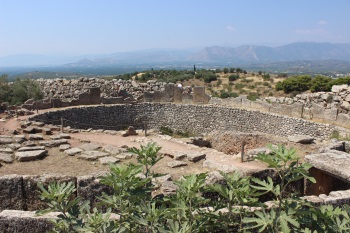 Mycenae is a large city, best known for its circular tombs and the Lion Gate.

Nearby Tiryns is a minature Mycenae with an acropolis and a series of tunnels beneath it. 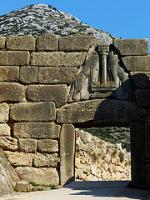 I visited this WHS in June 2014. I was expecting a pile of remains and a famous gate. Instead I found the remains of a whole citadel with fortified walls and tombs. The main highlights are the Lion Gate and the Beehive Tomb but the Archaeoligical Museum included in the price has beautiful artifacts and very good information boards. I enjoyed visiting this site in the late afternoon when all the tour groups had left and I must say that Mycenae is indeed one of my favourite WHS in Greece.

To see the actual beehive tomb where some of the linear b tablets were found satisfied my teen-agers longing to see something written in an old paperback text bought at the local drugstore in 1960s New Orleans. Once you are hooked on something it is hard to press it into the back of your mind.

Unfortunately I had only a passing glimpse of Tiryns on my way to Mycenae. Mycenae is a little disappointing to visit after reading much that has been written about it. The lion gate is classic and must be seen. The megaron foundation must be visited by anyone interested in Mycenean culture because this achitectural style is mentioned so often. Take a flashlight and explore the stairway down under the walls to the spring below. Nearby are other sights that are wonderful. Visit the large Mycenean beehive tomb and the Mycenean stone bridge (oldest in the world?).

My Greek journey was slowly coming to its final leg and the town of Nafplion became my base for the last week. Located by the Mediterranean and actually the capital of Greece during a few years in the 19th century, Nafplion it's a beautiful blend of Venetian and Greek architecture and actually a summer resort for the Greeks themselves, being just a couple of hours drive from Athens.

Not too far away from Nafplion you find the ancient site of Mycenae and Tyrins. The first is the obviously more well-known site and the place told in the Iliad and the Odyssey by Homer. At the time of my visit, luckily Brad Pitt had just ensured that the site was completely flooded with American tourist through his unforgettable interpretation of Akilles in the re-make of the movie Troy. Somehow I doubt that Brad will stand the test of time, compared to Homer though..!

If Mykene was over-crowded, Tyrins was completely empty, though part of the same Heritage Site. Unless you are absolutely dying to see the Lions Gate at Mycenae, Tyrins is also quite a good example of a Mycenean fortification. My personal suggestion is that you visit them both. Either with a car or by bus, it's not problem visiting them both in a day.

It has been a childhood dream for me to visit this veritable cradle of civilization. I can still recall the time when, as a primary-school boy, I used to read about the civilization at Mycenae and it famous and interesting citizens, especially Agammemnon.

And there I was, after hours of drive from Athens, standing emotionally in front of the Lions Gate beside the Cyclopedian walls ! What a sensation it was to pass through that gate as many other people have done before me and where the history of Greece, indeed all Europe, was shaped in such a bygone era!

It was a dream came true on a blazing summer afternoon.

I visited Tiryns last Saturday 14/6/03 and had looked forward to doing so for some years.The size of the citadel site was impressive but as the Olympic Games are in Athens next year and many interesting parts were closed for refurbishment such as the corbelled galleries, stairways and the complete Northern part of the site. They are building a new visitors centre to the NW of the site near the NW wall. Claims that the fortifications make up for its natural defensive deficiencies found at Mycenae seems fully justifiable. Like other Late Helladic IIIc sites the dimensions of the rooms are generally small. Both megaron are small for example. Could these really be throne rooms? Many are rooms are little more than foundations. Beware: the West wall is in shadow early morning and difficult to photograph. Its still worth a visit to relive the grandure of this civilisation. Take an Argos bus from marvellous Napflion for 90c one way for the 5 minute trip. The stop is outside the site. The entrance is a modest 3 euros. Enjoy. Mycenae, however,is still the one to visit. Try to get to see the famous C15th bc suit of armour with boar tooth helmet in the Napflion Museum from the Dhendra chamber tomb. The museum is by the Sygmata Square and entry is free. Shut Mondays of course. Happy archeology finding. David

Here you find "memories" of my participation

of the excavation in Tyrins (German Archaeological Institut):

Archaeological Sites of Mycenae and Tiryns

Gates depicting Lions: Lion Gate of Mycenae (1250 BC), depicts two lionesses
Tunnels: Tiryns (cyclopean tunnels)
Tombs: Lion Tomb, Tomb of Clytemnestra, Tomb of Aegisthos
Cemeteries: from the Helladic period
Acropolis: "Mycenae, an acropolis site, was continuously inhabited from the Early Neolithic" (Wiki) Tiryns see link
Granaries: Mycenae, near the Lion Gate "Beyond the gate and inside the citadel was a covered court with a small chamber, which probably functioned as a guard post. On the right, adjacent to the wall, was a building that has been identified as a granary because of the pithoi found there containing carbonized wheat" (Wiki)

Buried treasures: Gold Funerary Masks ("Mask of Agamemnon" etc)- Schliemann 1876. Now in National Archeology Museum in Athens
Bronze Age: Mycenae
Homeric Locations: Mycenae: City of Agamemnon
Helladic Greece
Neolithic age: The site of Mycenae is known from excavations to have been occupied from the Neolithic period (c . 4000 BC). (AB)
Archaeological 'Type Sites': "The Mycenaeans were a Greek-speaking culture of uncertain origins, typical of the chariot drvien warriers of the late Bronze Age. They occupied cities in the Peloponnese, including Mycenae (the "type site" from which the modern name for the culture is derived), Tiryns, Sparta, and Pylos, as well as cities elsewhere such as Athens and Thebes. Eventually, although the reasons and timing are uncertain, the Mycenaeans took over control of Crete"
Bronze Age Collapse

Masks: Mycenae - Mask of Agamemnon was discovered here in 1876 by Heinrich Schliemann. The artifact is a funeral mask hewn in gold (wiki)
Literature: Criterion vi: Mycenae and Tiryns are indissolubly linked with the Homeric epics, the Iliad and the Odyssey, the influence of which upon European literature and the arts has been profound for more than three millennia.

Heinrich Schliemann: Excavated by him (from 1876 on)

Built in the 2nd Millennium BC: Main monuments date from ca. 14th and 13th century BC, plus some 17th century BC grave circles