The Historic Centres of Berat and Gjirokastra are both well-preserved Ottoman towns, decorated with outstanding examples of kule: Balkan-Ottoman style tower houses.

Berat has been particularly marked by the peaceful coexistence of Ottoman Islam with a large Christian minority. The designated area includes Berat castle, mosques, churches, and the Gorica bridge.

Gjirokastra was built around a 13th-century citadel. From the 14th to the 19th century it developed into a regional center. Residential quarters, the bazaar, churches, and mosques were built vertically and in stone.

Map of Berat and Gjirokastra 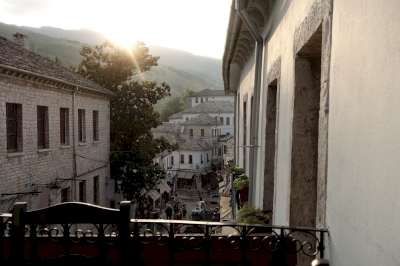 Arriving at Gjirokaster, I wasn’t sure what to expect. At first glance, there were no notable structures. Gjirokaster seemed to consist exclusively of the usual communist concrete fare. So was this it? Luckily not.

Historically, the valley of the Drino River was reserved for agriculture. The locals built their towns and villages on the slopes of the surrounding hills and mountains. And up in the hills, you will find in Gjirokaster: a great example of Ottoman architecture in the Balkans. Frankly, during my travels, I have seen nothing comparable in the Balkans.

As recommended by Els I visited the Zekate house. I also went to the castle. But mostly I enjoyed strolling through the cobblestone streets and taking pictures of the Ottoman houses covering the hillsides.

To me, this is a unique site that embodies the Ottomans and the Balkans. It’s also a great representative for Albania and their culture. I think it’s well worth a visit. Be prepared, though, for an almost obsessive-compulsive level of guest friendliness.

The easiest access point for southern Albania including Gjirokastra is Corfu. There are plenty of connections from Europe to the Greek island. From Corfu several daily ferries can take you to Saranda in Albania. You will even gain 20min as the ferry takes 40min and Greece is one hour ahead of Albania. From Saranda, you can take a minibus. These depart in front of the synagogue ruins on Rruga Flamurit. The bus stop is Gjirokaster is down in the valley.

Visiting both Corfu and Butrint is possible from Saranda.

On your way to Gjirokaster, you can also visit the Blue Eye. It’s promoted heavily to tourists and part of the standard itinerary of a day trip of cruise ship guests. But I found it underwhelming, especially as there are no hiking trails into the hills. If you want to visit nonetheless, ask the driver to let you off at the entry. From there it’s 20min walk to the site. To continue to your destination, return to the road and signal the minibus (they pass hourly).

The tradition of agriculture has continued to this day. Nearby Lazarat is a leading supplier for weed in Europe. I would discourage visiting. 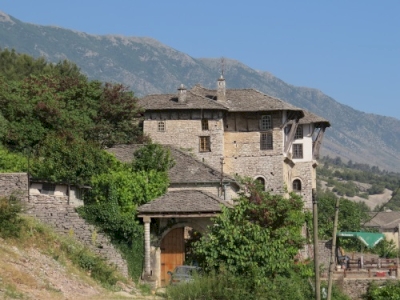 Berat and Gjirokastra are two towns in Central Albania, located some 150 km apart. Their strength lies in vernacular urban housing and monuments from the Classical Ottoman period. Both are also towns that developed in and around a citadel. Gjirokastra is locally called Gjirokaster, the -kastra comes from the Northern Albanian dialect. It first became a WHS on its own in 2005, while Berat was added as an extension 3 years later.

I started my visit to this WHS in Gjirokaster, en route from Butrint to Tirana. I arrived by bus in the Lower Town and decided to walk up to the historical area. It does look like a steep climb, but it takes only 20 minutes and it awards one with great views of the rows of tower houses Gjirokaster is known for. The historic center has a real authentic feel and I had a great time staying there overnight. This was further enhanced by local son Ismail Kadare's Chronicle in Stone, which I was reading. He describes life as a child in Gjirokaster during World War II. At that time it was a city with so many mosques "you could walk down the street, stretch your arm, and hang your hat on a minaret".

A few among Gjirokaster’s 200 tower houses are open to visitors. The Ethnographic Museum has interesting displays on how people lived, though the building itself is a modern reconstruction (on the site of the birth house of the other famous native, Enver Hoxha). Across the street lies the Skenduli house, which was returned to the Skenduli family after the fall of communism. They take visitors on a guided tour around their house, which is huge. The talks were informative, but the visit was a bit rushed. The best of the tower houses is Zekate house. This lies at the top end of the village, a house that had attracted my view already from various viewpoints around town. Here one can wander alone from room to room, and for example admire the painted fireplace.

In the late afternoon, I climbed once more, this time to the Castle of Gjirokaster. It houses a military museum (which is not exactly to my taste), but it holds some other points of interest such as a tekke from the Bektashism sect and the remains of a US airplane captured during the Cold War. The on-site museum tells Gjirokaster’s history well and is very critical of Hoxha who they claim only visited his hometown a couple of times after he came to power, and only did so during staged mass rallies.

After Gjirokaster I travelled on by bus to Berat. Including a change in Fier this takes about 3 hours. Berat is a totally different city, much more ‘tainted’ by communist-era structures. The views on the old Ottoman quarters Mangalem and Gorica from both sides of the Osum river are worth it though. What it does have preserved better than Gjirokaster is its religious buildings. I especially enjoyed the small area with the King's Mosque, the Helveti Tekke and the Han (Inn) of the Derwishes.

A definite letdown for me was the Berat Citadel. It’s not in a good state (think: rubble, lots of trash, overgrown areas), and the structures need a great imagination to fit names such as 'Red Mosque'. Not to be missed inside the citadel however is the Onufri Museum – a museum holding icons made by the artist Onufri. It is located in the Saint Mary Church, which has its original wood-carved iconostasis from 1806.

Visiting Berat and Gjirokaster takes the best part of two days, and to me, these were the most rewarding and most 'Albanian' sights of my week-long stay in the country.

Berat: The fortress area is spacious, but very good to roam on foot. The view from above is very nice, there were only a few other visitors there, so you could really look at everything in peace. The small museum is also worth seeing, but it costs extra. There are offered for sale very beautiful even embroidered tablecloths.

Gjirokastra: I highly recommend a visit. In my opinion it is the most beautiful city in Albania. Marvel at the old streets, houses covered with stone. This medieval atmosphere... You can visit the castle, which houses a military museum and a few old houses. You can stay overnight in one of the inns, to feel the atmosphere of Albania. 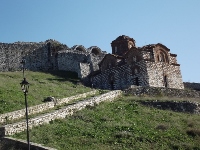 I recently travelled through Albania by bus from Ulcinj (Montenegro) to Sarande stopping in Skodra, Tirane, Berat and Gjirokastra along the way.

The road to Berat from Lushinje was the bumpiest of the journey, about 30 kms. The old town of Berat had much to offer in the way of churches, mosques and a monastery, as well as the castled perched above a cliff overlooking the whole region.

Similarly the view from the citadel of Gjirokastra extended over the whole Drina valley. The museum in the citadel contains quite an arsenal of old weapons, together with a captured US spy plane from the Cold War era.

I was in Gjirokastra just one day before it was proclaimed a world heritage site.My first impressions on the city were very complex, but one thought stayed in my mind during the whole trip, what was it like to live there 200 years ago, who were the people that lived in those magical and mystical houses, and what did the great castle witness during centuries of war. The city spoke of greatness and the stone houses together with the amazing view of the mountains and valleys, reflected the character of the people there. Amazing,rigid, mystical,friendly, this was Gjirokastra in one day for me.

To include the city centre of Berat

Historic Centres of Berat and Gjirokastra

Good looks have not sufficed to make Gjirokaster, a picturesque historical city in Southern Albania, the wealthy and successful tourist destination it aspires to be. (31.07.07)

Berat and Gjirokaster are well-served by public buses, whether you're coming from the North (Tirana) or South (Sarande/Butrint). Both are fairly sizeable cities on an Albanian scale. There are two direct buses a day between the two, or you can change for a more frequent connection via Fier.

Tombs: Sabbatai Zevi's Tomb in Berat
Clock Tower: Clock tower of the Citadel of Gjirokastra, "a fairly recent addition to the castle's buildings" (Bradt guide)
Tower-houses: Typical houses consist of a tall stone block structure which can be up to five stories high (kule at Gjirokastra)
Cisterns: A large cistern in the centre of Berat Castle
Notable Bridges: Gorica Bridge (Berat)
Aqueduct: The citadel of Gjirokastra had underground reservoirs to store water provided by an aqueduct, which was some 10km long, one of the longest of the period. (AB Ev)
Prison: The prison of the Gjirokastër Fortress was used extensively by King Zog's government and housed political prisoners during the Communist regime

Destroyed during invasion: Berat: sacked and burned by the Romans
Destroyed or damaged by Earthquake: The existing housing of Berat dates mainly from the 18th and 19th centuries. Many of the houses suffered from a serious earthquake in 1851, and their upper stories were destroyed. Before the earthquake the buildings were all built in stone. In the reconstruction, however, the upper floors were built in timber, while maintaining the surviving stone structures of the ground floor. (AB Ev)
'Threatened' by Roads: There are plans for a bypass road in the city of Gjirokastra, despite a call from Unesco during its 44th session in July 2021 for its urgent suspension to assess the risk to the renowned "stone city".

Ottoman Empire: Well-preserved Ottoman town.
Sieges and Battles: Siege of Berat 1455
Byzantine Empire and Civilization: Gjirokastra: The city appears in the historical record dating back in 1336 by its Greek name, Αργυρόκαστρο, Argyrókastro, as part of the Byzantine Empire. (wiki), "the citadel area numbers many Byzantine churches, mainly from the 13th century," (official description)
Famous suicides: According to legend, during the final siege of the city by the Turks, Princess Argjiro, the sister of the lord of the city jumped from the walls of the castle with her son to avoid falling alive into the hands of the enemy. Hence the name "the castle of Argjiro". (wiki)

Festivals: The Gjirokastër National Folklore Festival is an artistic festival taking place every five years at Gjirokastër Castle in Gjirokastër. The festival was first held in 1968 and is regarded as the most important event in Albanian culture. The festival showcases Albanian traditional music, dress and dance from Albania, the diaspora, and Albanian inhabited lands throughout the Balkans and Southern Italy.

Archaeological potential: The subsoil still bears previous traces of the various Balkan civilisations yet to be uncovered by archaeologists. (AB Ev)

Located in a Former Capital: Gjirokastra, former Autonomous Republic of Northern Epirus
Minority communities: Considerable Greek community in Gjirokastra, its coexistence is part of the OUV of this site
Dubbed 'White City': The name of the city in Albanian is "Berat" or "Berati", which is probably derived from the Old Slavonic Бѣлградъ or "Bel(i)grad"[(Белград, meaning "white city" in theSouth Slavic languages), under which name it was known in Greek, Bulgarian, Latin and Slavic documents during the High and Late Middle Ages