Rio de Janeiro, Carioca Landscapes between the Mountain and the Sea, is a dramatic example how the landscape has been used and shaped. This city of great beauty reaches from the mountains to the sea.

Rio’s natural landscape started to be altered in the 17th and 18th centuries to allow sugar and coffee growing. Its parks and gardens later became protected, and as such attributed to the outdoor living culture of the city.

The designated area consists of the following parts:

My visit to Rio de Janeiro was a short one, and I was rained out during the first day.

The next morning it was more or less dry. By bus I went to the Pão de Açúcar (Sugar Loaf). This is the most prominent hill in the landscape of Rio. You get to the top via two cable cars. There may have been 75 people inside and it was pretty busy. The halfway stop I found the most beautiful: the views of the beaches and the Sugarloaf itself. A day later the sun was shining again. So a quick taxi ride brought me to the Corcovado, the mountain with the well-known Christ statue. It is reached by a little train, a tourist attraction by itself in Rio. What I found striking were the number of people engaged in the train. It looked like an employment project for the local youth. The train ride took about 20 minutes, passing through the Atlantic rainforest of the Tijuca National Park. A beautiful ride. Up near the statue there's a beautiful view over the city.

Back at the bottom again I visited the Museum of Naive Art. Definitely worth it, with paintings on Rio and the history of Brazil on show. 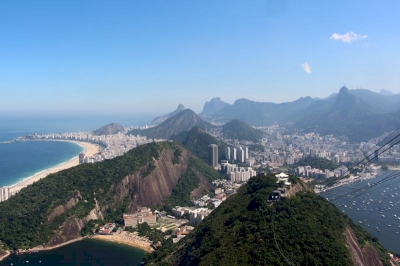 Rio is one of these WHS I visually absolutely enjoy, but it is not really clear to me where the UOV lies. However, I enjoyed my visit and was happy that I could combine visiting a new WHS and completing my minor travel goal to visit all New 7 Wonders. The other reviews covered the most important points, so I will concentrate on how to get to the parts of the WHS I visited.

In general I walked a lot. There are “walk Rio” sign posts all around the city and it’s sufficiently marked where to go to get to the next stop. I never felt unsafe and hat no problem using my big camera and my mobile phone in public. After covering Valango Wharf and 2 TWHS on foot in down town, I took the metro to Copacabana. I got off at Cantagalo station and walked the few minutes to the beach. Copacabana is by far the part of the town, where I saw most foreigners and it doesn’t feel like a WHS at all. I still enjoyed walking in the warm water and moved towards the Sugar Loaf for around 1km. I left the beach at the Hilton  and walked to the funicular station of the Sugar Loaf. Takes around 45mins and you will cross a tunnel on the way. I arrived at the funicular station around noon. Strangely I was much faster without online reservation. While those who reserved a ticket online were waiting in a tremendous line I pretty much entered instantly. After the first stop you have to change funicular, which means getting in line again. I was lucky a second time and got in instantly as well. As I saw on my way back, the waiting time can get much longer very fast. Turns out noon was just the right time. Probably many had lunch during this time. Views from the Sugar Loaf are the best, so it is a must on your itinerary. From the second station I walked down through the jungle. Very pleasant walk. I even spotted some monkeys.

The next day I took a van from Largo de Machado metro station (Van terminal just outside the exit, in a small park) to Corcovado. I had reserved a spot online for 8am. Even though they tell you to be at the office 30mins before departure, they didn’t open till 8 and I had to wait. Taking the first van proofed to by a good thing. At Corcovado station you need to exit the van and take a new one that brings you all the way to the statue. I could board instantly, but infrastructure tells me this can change for those arriving later. For the way down I spontaneously decided to walk. The trail is easy to find, but only enjoyable for experienced hikers. Hiking through the jungle I again saw some monkeys (yes, I like them) and birds. It took my around 50mins to get the Parque Lage. From there you can take a bus to the next metro station or, like me, walk around the Lagoa Rodrigo de Freitas to Jardim de Alah metro station. 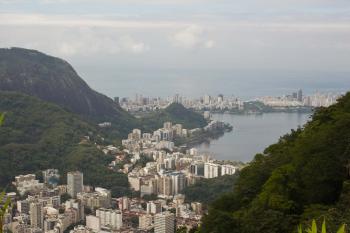 The issue I have with this site is that it's never really clear when you're actually in a World Heritage area - the designated spots are not distinct enough from the rest of the city. You don't really need to do anything special to see the WHS areas - any normal tourist will go to at least a couple of them. And I don't really see their significance.

Still, Rio is a fascinating city and certainly worth visiting. You'll never regret going if you haven't been before! 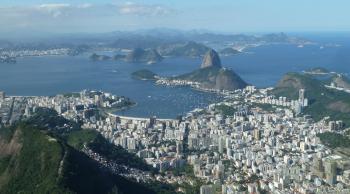 As far as arrivals go, not many places are going to top Rio. Our morning flight from Belo Horrizonte brought us over Rio’s incredible cityscape , nestled in amongst rainforest clad rounded peaks. My wife and I were clamouring over the window for our first glimpse of Christ the Redeemer, the Maracana, and Copacabana beach. Our descent into Santos Dumont airport was completed by a dramatic turn in front of Sugar Loaf Mountain. It was an incredible introduction to a unique city.

The world heritage site boundary is actually pretty limited. It excludes the majority of Rio’s built environment, which is covered separately by the four tentative sites that are scattered over a small area in the city centre. As such the outstanding universal value of this cultural landscape lies mainly in its natural features.

Given the limited boundary, it wasn't until late on our second day of touring that we entered the core part of the world heritage site. This was when we went for an evening stroll around the pleasant suburb of Urca, which is tucked up against Sugar Loaf Mountain. The seafront wall provided a nice place to join the locals while watching the sunset, the planes circle, and kids play beach football.

The unique urban landscape meant there were endless times when the best thing to do was gawp at the magnificent views. The best are from Copacabana Fort, from Niemeyer's Niteroi art centre back across the bay, the brooding monoliths that dominate the beaches of Botafogo and Ipanema, and of course the vista from the base of Christ the Redeemer statue. The latter is one of those places that lives up to its reputation and overexposure in 'must see' lists.

Rio turned out to be a welcoming and friendly place, though we never quite found the sort of neighbourhood atmosphere that has made many other large cities we’ve been to so enjoyable. Botafogo and Santa Theresa both seemed pleasant, but we happened to be in these areas on quieter nights and so perhaps not seeing them at their best.

As die-hard urbanites, we felt that Rio as a city left us wanting more. However, the spectacular natural setting and welcoming population make this world famous city an extremely enjoyable place to spend four very full days.

Just visited (March 2013). I have some mixed feelings connected with Rio's nomination. First of all it is one of those places that don't need UNESCO status to be visited. There are not many other big cities in the world with so remarkable lanscape / location. Truely one of world wonders.

But if we see what was really iscribed these are just parts of the city mostly rainforest located inside the town but inscribed as cultural landscape. Little bit strange. Of course Christ on the top of Corcovado is amazing together with Sugar Loaf (in this case is just a huge rock) and less known Botanical Garden (one of the best I have ever been) but other areas were a little bit dissapointing (dirty Copacabana surrounded by modern buildings, similar Botafogo beach - part of Guanabara Bay). Apart from those top atractions there are just modern buildings although perfectly located

On cultural criteria, to undertake an appraisal of the cultural values of Rio's setting

Rio de Janeiro, Carioca Landscapes between the Mountain and the Sea

Tijuca National Park, including Corcovado peak and its Christ the Redeemer statue

Art Deco: Christ the Redeemer - considered the largest Art Deco statue in the world (wiki)
Reinforced Concrete: made of reinforced concrete and soapstone (wiki)
Designed by or influenced Le Corbusier: Le Corbusier visited in 1929 during a tour of several cities in the Americas by air. He was particularly taken by the new ideas gained from "aerial vision" and produced an outline design for the city which incorporated Sugar loaf/ Corcovado etc. His vision is presented from around minute 10 of this video

Atlantic Ocean: Rio de Janeiro is on the far western part of a strip of Brazil's Atlantic coast (wiki)
Pareidolia: Pedra da Gavea - Differential weathering on one side of the rock has created what is described as a stylized human face. Markings on another face of the rock have been described as an inscription (wiki)

Contains significant structures from the 20th Century: Christ the Redeemer (1931)

Mapped or Illustrated by Blaeu: On top frieze of "Americae nova tabula" (1617)

Built in the 16th century: The first European settlement, Rio, was founded at the foot of Sugar Loaf in 1565. (AB ev)

Located in a Former Capital: The city was the capital of Brazil for nearly two centuries, from 1763 to 1815 during the Portuguese colonial era, 1815 to 1821 as the capital of the United Kingdom of Portugal, Brazil and Algarves, and 1822 to 1960 as an independent nation (wiki)
Built or owned by French: Christ the Redeemer: sculpted by French artist Paul Landowsky.
Location for a classic movie: Christ the Redeemer: As early as the 1940s, Hollywood captured the structure's iconic appeal in such cinematic vehicles as the 1942 Bette Davis film Now, Voyager and Alfred Hitchcock's 1946 film Notorious starring Ingrid Bergman. (wiki) + That Man from Rio (French adventure film 1964)
Built or owned by Portuguese: The Niteroi forts of Fortaleza de Sta Cruz, Forte Sao Joao, Pico Fort, Imbao Fort - "There is a group of Portuguese forts on Niteroi (AB)
Cultural sites taking up an entire island: The inscribed area of Rio contains 2 islands fully within it: a. Ilha da Laje (or "Slab" island) b. Ilha de Cotunduba
Epic Subtitles: Carioca Landscapes between the Mountain and the Sea
Built or owned by Poles: Christ the Redeemer statue was made by the Polish-French monument sculptor Paul Landowski
James Bond in Movies: Moonraker (1979) (Sugarloaf mountain and Christ the Redeemer Statue)
Olympic Venues: Men's Cycling Race - Rio de Janeiro 2016: The last half of the race featured three summits through the Serra de Carioca of Tijuca National Park and past the Jardim Botânico as part of the Vista Chinesa Circuit
Marvel Cinematic Universe: The Incredible Hulk; filming took place at the Taunay waterfall in the Tijuca National Forest, filling in for the jungles of Guatemala, where Bruce Banner finds himself after having transformed back from the Hulk
In The Simpsons: “Blame It on Lisa” (2002)
Featured in the Go Jetters: Series 1: Episode 29: Rio de Janeiro

New Seven Wonders of the World: Christ the Redeemer statue