The Medieval City of Rhodes, built by the Christian military order Knights Hospitalers, is one of the best preserved medieval towns in Europe. The city center is located within a 4km long wall. It has numerous fine Frankish (Gothic) and Ottoman buildings. 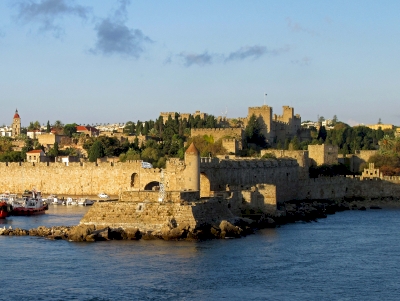 Before my visit, I was aware of a couple facets of Rhodian history. First, this was the site of one of the Seven Wonders of the World -- the Colossus of Rhodes. This statue to the Greek sun god Helios was demolished long ago, and its exact location has been lost through the ages. Still, I walked out to the entrance to the old city harbor to imagine what it must have been like to see such a statue on an approach by sea. Indeed -- even without the statue, the medieval walls and the Palace of the Grand Master in the heart of Rhodes are rather spectacular to see from the water.

Second, and more important to its status as a World Heritage Site, Rhodes for two centuries was home to the medieval Knights Hospitalier, also known as the Order of Saint John, dedicated to caring for pilgrims en route to Jeruslem and the Holy Land. This aspect of Rhodes was what my friend I was traveling with was most interested in exploring, so after we attended an early Sunday morning service at a Greek Orthodox church, we set to exploring the vast city walls and gates. We visited Rhodes in November, so much of the city was empty of tourists, and we passed only locals and stray dogs as we wandered through alleys and narrow streets. Of the many gates of the city we encountered, the Gate of Saint John and the multi-layered ramparts of the Gate of Saint Anthanasios, through which the Ottomans entered the city in the early 16th century, impressed me the most.

In addition to the city walls and gates built and/or modified by the Knights Hopsitalier, two major sites within the medieval city remain as a testament to their heritage: The Palace of the Grand Master and the Street of the Knights. The Palace was rather empty when we first arrived, but quickly accumulated other tourists avoiding a passing rain shower. Still, the rooms were largely empty, which left plenty of space to admire the intricate Byzantine-era mosaics on display. A museum within the palace also provided a good overview of the rich history of this city and island that for many years stood as a crossroads in the Mediterranean for travelers going to and from the Holy Land. Near the end of the walk through the palace were some simple rooms used to house sick and recovering pilgrims, part of the mission of the Knights Hospitalier, as well as displays highlighting the present-day history of the Knights, who moved on to Malta after the Ottomans conquered Rhodes.

Outside the palace, the Street of the Knights slopes down to the harbor. At the end of the street is a former medieval hospital, while on either side of this street are former hostels for the different langues of the Knights -- divisions of the order based on languages spoken, to include the Langues of France, Italy, and Spain. Each of these langues were responsible for defending specific sections of the fortress walls, and some of the city's embankments, or terreplains, were named after the langues who defended them.

Overall, the city of Rhodes was a relaxing and enjoyable site to explore, and I loved the mixture of Ottoman, medieval, and Byzantine architecture on display. Although the weather was a bit rainy when I visited, as I understand it, this is generally a sun-kissed corner of the Mediterranean, and hopefully it will be good weather for all who attend the meetup in September.

Logistics: The Medieval City of Rhodes is quite easy to navigate on foot, and there are plenty of small side streets to explore.

Rhodes would probably easy make it into the top 25 visited list on a community site for package tour travellers. The city is stuffed with visitors from cruise ships and the nearby party destinations, like Faliraki. No need to mention that almost every building within the walls is either a restaurant, a shop or a pension. Nevertheless Rhodes is one of the most beautiful medieval cities I've seen so far. The 4km town wall is stunning. The city is set at the sea and was occupied by the Ottomans for a few centuries, creating a really special flair. Further, Rhodes island is one of the sunniest places in Europe. Chances that clouds are ruining your pictures between April and October are pretty low. Definitely worth a trip.

I visited Rhodes through an island tour stop. We spent the better part of the day here. We had a tour of the medieval city but then we explored on our own. the old city was incredible, one surprise after another as you wandered the alley ways. The area by the water was beautiful. I would suggest spending two-three days here; one went by way too fast. We also visited Lindos and I would recommend doing this. Lindos is older but holds a lot of history and is definitely worth the trip.

I thouroughly suggest Rhodes as a holiday place , the medieval city is absolutely amazing and very well preserved, in between the two parts of the wall , there is an open theatre where live concerts of greek artists are given , nice music, the mystic yellow lights of the castle, a night summer breeze in the air, friendly people, and charter airplanes crossing the air with their lights every 10 minutes , make Rhodes one of Greeces most dynamic and classic places. The story of this order of St Johns knights is so interesting too, now i ll be looking for some books on this matter. I absolutely enjoyed my time in this magnificent town. One bad thing only, motor bikes should be forbiden of crossing the narrow streets of the old city..the noise is bothering. Thanks!!

The city of Rhodes is fabulous. This medieval city has been restored, and is as beautiful a walled city as any of the hundreds we have seen in other countries in Europe

Near some expensive hotels there were a dozen bathing-beauties, some so poor they could only afford half of a bathing suit, so were barefoot from the waist up.

Italian fascist architecture: Palace of the Grand Master. - An earlier building was destroyed by explosion in 1856 and stood in ruins until reconstructed by Italian architects under the instructions of Mussolini in 1937 as a holiday home for himself/royalty/aristocracy.

Blown up: April 3, 1856: Palace of the Grand Masters: a lightning strike set off explosions of the stored ammunition, killing 4000 people
Damaged in World War II: German-occupied medieval city bombed by British in 1944

The Crusades
Sieges and Battles: Demetrius of Macedonia 304/4BC (lifted), Ottomans 1480 (lifted), Ottomans 1522
Knights Hospitaller: Had been retrieved for Byzantium during the First Crusade. But, having been expelled from Jerusalem in 1291 the Knights Hospitaller occupied it in 1309 after a 2 year siege. They made it their HQ when they were fully expelled from Tripoli.
Ottoman Empire: After 1522 the island was a possession of the Ottoman Empire for nearly four centuries

Giosafat Barbaro: In 1473 Barbaro traveled to Cyprus by way of Corfu, Modon, Corone and Rhodes.

Built in the 14th century: From 1309 on, the Knights Hospitaller rebuilt the city into a model of the European medieval ideal.

Seven Wonders of the World: Colossus of Rhodes (felled by an earthquake in 226 BC)
Europa Nostra Award: Bastion of the Grand Master’s Palace in Rhodes (2017)
World Monuments Watch (past): Kahal Shalom Synagogue (2000)