Te Wahipounamu - South West New Zealand is thought to contain some of the best modern representations of the original flora and fauna present in Gondwanaland.

The site incorporates four National Parks, plus the intervening land: 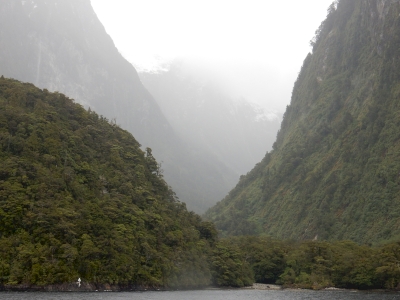 The incessant rain dripped from my sunhat. My jeans were clinging clammily to my legs. My surroundings lay lost in the cloud banks that enveloped the little boat, creating an aura of mystery and suspense. Alone on the upper deck I braced myself on the rail as we cut across the mouth of Doubtful Sound, roiling and bucking with the waves.

Te Wāhipounamu World Heritage Site is comprised of four contiguous national parks running up the southern west coast of New Zealand’s South Island. From south to north these are Fiordland National Park, Mt Aspiring National Park, Westland National Park and Aoraki / Mt Cook National Park. Our trip to New Zealand had been scheduled to take in the first three of these. As it was, due to being ripped off by a campervan hire company and being left stranded in Queenstown with no transport, no accommodation and no money to pay for either, our once-in-a-lifetime trip to New Zealand ended up starting and ending with a single day trip to Doubtful Sound in Fiordland before we had to fly home early (New Zealand remains the only place I’ve visited where I was glad to pay more to leave the country sooner than planned).

Doubtful Sound, the less visited southern sister to the more famous Milford Sound, requires a full day – though it depends on where you start from. Tours – you can search for them yourselves - leave from the town of Manapouri at 10am sharp, so if you are an early riser you potentially could leave the tourist hub of Queenstown before the crack of dawn, drive flat out and get there in time, before doing the same in reverse at the end of the day. I think organised tours by coach also permit a day trip. We didn’t fancy our chances and so we booked accommodation for two nights in Manapouri. I would certainly recommend that as an option if you have time and money and your own set of wheels. But book ahead – on our tour 43 of the 45 available spaces were taken.

The journey to the sound is itself a bit of an adventure. It has three stages:

Doubtful Sound is meant to be a connoisseur’s choice. Milford Sound offers competing tour companies, a range of adventure activities and the end of the famous Milford Track. Doubtful is far less visited. The selling points, as explained to me, were that it was larger than Milford Sound and also quieter. Without having visited Milford I don’t feel equipped to make a full comparison. However, I would comment that I was in no place to judge the size of Doubtful because we spent the entire journey swaddled in cloud. Other than when we nosed up to the cliffs to wonder at the cascades of crystal-clear rain- and melt-water the surrounding landforms were only dark shapes in the mist. And I could not judge the silence either because the engines of the boat thrummed constantly underfoot to keep us from being driven into the rocks. I did have some joy at spotting wildlife though, with three New Zealand fur seals and four rare Fiordland penguins being spotted.

Would I visit Doubtful Sound again? Well, my experience of New Zealand was rather soured by the treatment we received there and I did vow in anger to never return. But the reasons I wanted to visit in the first place remain valid, I suppose, so my opinions have mellowed slightly over the intervening two years. I would still like to properly have my once-in-a-lifetime trip to New Zealand, and exploring more of ‘the place of greenstone’ would form a decent chunk of that. But next time I might take the easier option and opt for Milford Sound instead. Purely for comparative purposes, you understand. 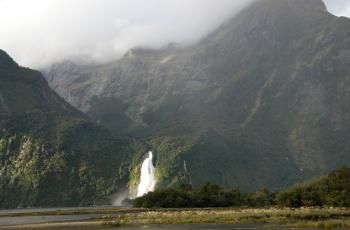 I visited Te Wahipounamu in July of 2007.

Te Wahipounamu is the Maori word for what is the fjordlands area in the southwest corner of the South Island of New Zealand. This includes the famous Milford and Doubtful Sounds.

I did a tour of Milford Sound and had the pleasure of going immediately after it had rained for 24-hours. Water was flowing down the sides of the fjord in hundreds of small waterfalls, and the large waterfalls were going at full flow.

Visiting can usually be done on a day trip from Queenstown, but you can also stay in the region to do and experience more. 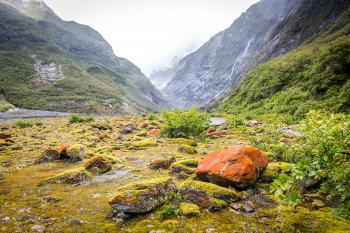 The hardest thing about this WHS is knowing where to start... and where to stop. It's not just enormous in terms of area, it has such an incredible amount of diversity. In some ways, it could easily be split into a few different World Heritage Sites, because each area has such unique aspects.

As a visitor, I think the best thing is to hire a car and take your time driving along the coast over a number of days, stopping for different walks and viewpoints.

One of the highlights (for me) was the glaciers - particularly Fox and Franz Josef. The sad things is that they are receding so quickly at the moment. Part of that is just the natural ebb and flow but the human-caused climate change is also having a big effect. I wonder how long they will last. Will there be a generation soon that won't be able to see this?!

As a local who has completed two full tours of the country, I have to say there is no other part which quite creates the sense of travelling into the prehistoric past the way Te Wahipounamu does.

It's so simple to find a quiet spot where you can contemplate how little the landscape has changed here over the aeons, to get some perspective on how damaging the presence of humans is - and how important it is to ensure areas like this remain free of that damage. Then there is just the sheer, raw natural beauty of the place - it's a cliche to say it leaves me speechless, but that truly is the effect. 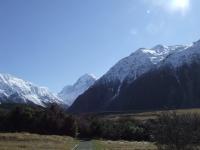 I was enraptured when I read the reviews already on this page.

In April I made the 1000 km journey to the bottom of the South Island. This is the real New Zealand, far removed from the city life that I endure in Auckland.

Most people travel to these remote areas by car, but if you are travelling alone, or feel that is too un-green, be assured that I toured the whole area from and back to Christchurch by local bus and train services. Because of the tortuous nature of the roads there I would recommend this as it allows you watch the scenery instead of the road.

From Christchurch there are direct bus services to Te Anau, Queenstown, Mount Cook and Greymouth, as well as the scenic rail link to Greymouth that I used.

From Te Anau there are several services to Milford which connect there with boat trips up the Sound.

From Queenstown there are bus services to Te Anau (for Fiordland), to Glenorchy and Wanaka (for Mount Aspiring), to Fox and Franz Joseph Glaciers (for Westland) and onwards to Greymouth.

For the more energetic there are walks on the Milford and Routeburn tracks that lead through the Fiordland and Mount Aspiring National Parks respectively.

Ah, New Zealand! I travelled for 3 1/2 weeks on both North and South Islands. Fiordland National Park is stunning but watch out for those keas (alpine parrots) that will tear their beaks into anything in their path, including your car! I took a boat tour on Milford Sound and felt like Jacques Cousteau. The waterfalls were beautiful and what a thrill it was to see seals on the rocks! On the boat, I went fishing for the first time with a makeshift rod that the boat crew gave me. Didn't catch any fish - just fed them with my bait!

In a land of superlatives, Fiordland National Park earns the highest ranking possible in all around natural beauty. My jaw hurt from repetitive dropping as we made our way to scenic Milford Sound, passing through majestic glacier-topped mountains ringed with temperate rain forest. At Milford Sound, I suggest the boat tours, as the raging waterfalls, dolphin encounters and lazing seals are best seen from this vantage point. I have traveled extensively and I do not say this lightly when I call this area the most beautiful spot on earth.

I am a bit surprised to see how many beautiful, world-class things Newzealanders have managed to "throw in one basket" with this monument. In fact Te Wahipounamu is quite big and extremely diverse natural area, and some other nations may be would make some five World Heritage sites out of it.

To me was a surprise to see so few people and so little development in Fiordland. Humans have managed to build here some prety good roads and some smaller cities and villages, but everything else is rugged mountains, dense coastal rainforest, incredible waterfalls, magnificent ocean - fairytale land (see "Lord of the Rings").

Encompasses the in 1986 inscribed parks Fjordland and Mount Cook

Nine people, including four foreigners, killed in a skydiving plane crash shortly after takeoff at an airstrip near the Fox Glacier tourist spot on the rugged west coast of New Zealand's South Island. (12.09.10)

Pacific Ocean
Fjords
Glaciers: Tasman, Franz Josef and Cox
Territorial Highest points: Mount Cook is the highest mountain in New Zealand, reaching a height of 3,754 metres
Polynesia
Located at an 'extreme point' of Latitude or Longitude : "West Cape is the westernmost point in the main chain of islands of New Zealand. It is located ... within Fiordland National Park". Cape Lovitt on the Auckland islands is further West but "although considered as integral parts of New Zealand, (these Islands) ...are not part of any region or district, but are instead designated as Area Outside Territorial Authority." (Wiki)
World's most prominant mountains: Mt Cook 37th most prominent (3775m/0/MSL)
World's Highest Topographically isolated summits: Mt Cook 10th most isolated (3139/37540)
Dark-sky preserve: Aoraki/Mount Cook National Park
Submerged continent: Zealandia

Captain James Cook: Doubtful Sound named by Cook (who didn't go into it -hence the name). He also mapped the rest of the coast but, famously "missed" recognising Milford Sound

Miocene: Uplift has been fastest during the last 5 million years, and the mountains continue to be raised today by tectonic pressure, causing earthquakes on the Alpine Fault. (Wiki)

Tourist Treks: Milford Trail
On Banknotes: Aoraki/Mount Cook; 5 NZD
Fatal Accidents or 'disasters': Fox Glacier in Westland National Park: Two Australian tourists were killed 8 January 2009 when more than 100 tonnes of ice fell on them. Nine people, including four international tourists, died in a plane crash 4 September 2010 when the plane, carrying a party of skydivers and tourists, crashed at the end of the runway at Fox Glacier Airport. Seven people, including the pilot, have been killed in a helicopter crash in Nov 2015.
Location for a classic movie: Lord of the Rings (2001), Oldboy (2003)
Covers more than 5% of country: Te Wahipounamu makes up 9,64% of New Zealand's area.

Inscribed on all 4 Natural criteria
Name changes: A complicated "morphing" of the name as part of boundary and other changes - so the 2 separate inscriptions from 1986 "The Westland and Mount Cook NP" and the "Fjordland NP" were subsumed within a new larger site which was called "SW NZ World Heritage area (Te Wahipounamu)" in the 1990 IUCN documentation but was officially inscribed as "Te Wahipounamu - SW NZ". This "final" name change to give precedence to the Maori aspects of the name occurred following comments made in the earlier Bureau meeting.
Extensions on Tentative List: Waters and seabed of Fiordland (Te Moana O Atawhenua)
First inscriptions: NZ 1986