There are basically two options to get a glimpse of the Aeolian Islands in one day: join one of the mini cruises that take in most of them, or organize a trip yourself to one of the closest islands to the mainland (Vulcano or Lipari). I opted for the last possibility, and checked in at 9.30 a.m. in the rather scruffy city of Milazzo for the hydrofoil to Vulcano. There's no sign, but the smell tells you that you've arrived: Vulcano = sulphur. I choose this island because it could give me the opportunity to observe a sleeping vulcano from close range. There's not much else to see, besides wonderful views on some of the other islands. The climb to the crater takes about one hour. There's little shade and the first half hour is very tiring because of the steepness and the lush sand one has to wade through. Once at the top, not the crater but the fumaroles catch the attention: cracks in the ground that let off a sulphurous steam. Other visitors even brought gasmasks to be able to withstand the smoke of these fumaroles! I just stood watching from a careful distance, enjoying this natural spectactle. I walked on the edge of the crater too, you can even follow a trail that leads to the bottom of the crater. 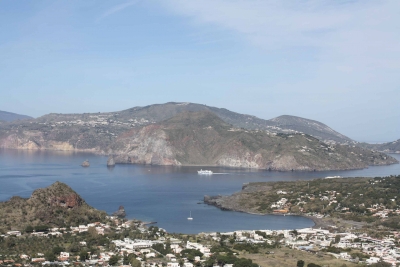 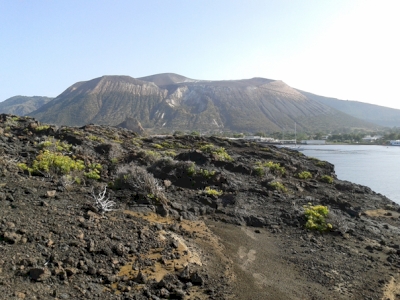 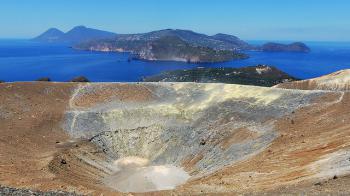