Delhi - A Heritage City is part of the Tentative list of India in order to qualify for inclusion in the World Heritage List. This site (or parts of it) has already been inscribed under Red Fort WHS.

Delhi - A Heritage City comprises the historic urbanscape of its four precincts Mehrauli, Nizamuddin, Shahjahanabad and New Delhi. It is considered a mixture of Islamic and European worlds. Delhi has been a capital during various periods. Also Sufism has developed here in Mehrauli Village and Nizamuddin in the traditional settlements that developed around the shrine of a Sufi saint.

Map of Delhi - A Heritage City 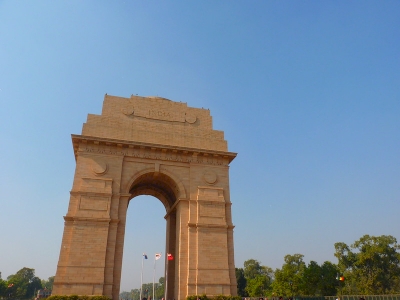 I visited this tentative WHS in January 2012. In a way, India's capital, Delhi, is a bit like China's capital, Beijing. Several top notch WHS here and there, but no real 'historic centre'. This nomination tries to make up for this by highlighting Delhi's “surviving historic urbanscape” in a triangular patch of land with the River Yamuna on one side and the northern range of Aravalli hills on the other two sides.

This historic urbanscape comprises the four precincts of Mehrauli, Nizamuddin, Shahjahanabad and New Delhi. The first three precincts are already well covered in reviews of the already inscribed crown jewels of each precinct, namely Qutab Minar, Humayun's Tomb and the Red Fort. So in this review I will focus on the remaining precinct New Delhi.

New Delhi was designed by Sir Edward Lutyens and Herbert Baker, who redefined the architecture and urbanism of the city. At its core, the Kingsway (now Rajpath) is adorned with several iconic buildings such as the Rashtrapati Bhawan and the India Gate (photo) although not exactly on par with the recently inscribed buildings of Mumbai for example.

Even though the nomination dossier tries hard to convey “Delhi's unique cultural landscape evolved from the mingling of multiple streams of cultural impulses from the Islamic and European worlds”, I would only be in favour of such an inscription on the WH list if at any point in the future 'cleaning-up' or 'streamlining' efforts are made to cluster already inscribed WHS. For example, Gothic Cathedrals of Europe along the lines of Belfries of France and Belgium or one Iguazu or Sundarbans inscription.