Thingvellir National Park is part of the Tentative list of Iceland in order to qualify for inclusion in the World Heritage List. It is a proposed extension of Thingvellir WHS.

The current Þingvellir National Park encloses the old Þingvellir National Park. While the existing site is concentrated around the remains of the Alþing itself this tentative site is concentrated around the rift zone as the continuation of the Mid-Atlantic ridge across Iceland and it is an exceptionally clear evidence for continental drift and plate tectonics. The lake Þingvallavatn is the largest natural lake in Iceland and the water is crystal clear, with a depth visibility down to 12 m. 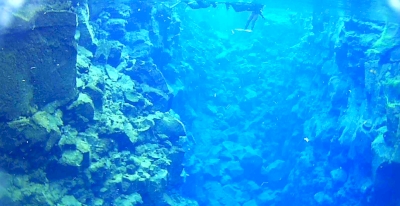 Having first visited Þingvellir National Park to see the parliamentary site in 2013, a repeat visit was made in August 2017 in order to snorkel at the Silfra Rift, part of Lake Þingvallavatn and created by the separation of the North American and Eurasian tectonic plates.

The description of crystal clear water with exceptional visibility is spot on, with the water the deepest of blues. The description of fridge-temperature water is also accurate, but the drysuits and equipment provided, not to mention the post-experience hot chocolate meant being warm and dry within an hour of entering the water. I didn’t see any of the fish mentioned in the extension description, just much algae which provided a startling green contrast to the deep blue.

We self-drove to the dive site first thing in the morning during what is peak tourist season in Iceland, but there was only one group ahead of us snorkelling, and we didn’t see them at any point. The physical effort involved was minimal - swimming is actually discouraged by the professional guides as it is better to drift with the slow subterranean spring current.

It is expensive, at over €130 a head, but how often are you going to snorkel between two continents, as the brochures would say? There are several dive times starting in the morning and afternoon. We went in the morning as we were heading back to overnight in Reykjavik ahead of an epic drive to the Westfjords.

The extension description paints Þingvellir as a “magnificent showcase in geology”. It highlights how typically such rift systems are sub-oceanic and differentiates itself from the East African Rift Valley, which, in my limited travels there, is very different. I am unsure if the actual natural criteria proposed are outstanding enough in the vast world of geological processes, but it probably makes sense that it would be included under the umbrella of the existing site.