The 'Aqueduct of Padre Tembleque Hydraulic System' encompasses a 16th century canal system that is unique in the Americas.

The system was initiated by Franciscan friars. Its design shows a fusion of Mesoamerican and European features.

The hydraulic system lies between the towns of Zempoala, Hidalgo and Otumba, in the State of Mexico.

Map of Aqueduct of Padre Tembleque 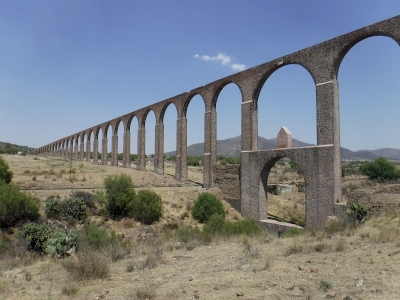 Like everyone else here, I visited this site as part of a day trip from Mexico City coupled with Teotihuacán. I solely visited the 66 (or 68 as the information board next to the arches states) arches of la Archería Monumental de Tepeyahualco. This construction is highly impressive, but it still makes a short visit. I spent about 30 minutes walking around and under the arches. There is little to do once you've reach the site other than gazing at it. As most interesting facts about its history and significance have already been mentioned by previous reviewers, I will tell you more about the journey to get there which is also part of the fun.

I reached Teotihuacán by public transport and arrived just after opening. I highly advise anyone to do the same as we were only two tourists atop the Pyramid of the Sun. With such an early start, I was done with the ruins in early afternoon. I thought it would be easy to find a taxi at such a popular site (how wrong I was!). All taxis in the parking lot were waiting for customers and could not take me in. I thus left the parking lot and then walked north from the roundabout on the road linking all entrances to the ruins. Interestingly, the sidewalk on the left side of this street is lined with interpretive panels about the World Heritage. I hailed many taxis driving by, but all refused to take me to the aqueduct. The fact that it was in another state appeared to be a problem for some of them (Teotihuacán is in the state of México, while the aqueduct is in the state of Hidalgo).

I desperately ended up in a restaurant on that road, asking the owner if he could call someone to take me there. We negotiated a price and the guy soon arrived. I was surprised to be taking part in a family excursion, as his wife and his baby were also taking place in the car. Moreover, that car was probably built way before I was born and unexpectedly survived until now. He had to ask a couple of times to passersby, but we managed to make it to the arches. I had interesting discussions with them, and he took a different road on our way back to show me other villages and the countryside. He dropped me back at Teotihuacán where I could take the bus back to Mexico City.

In sum, you might need to struggle to reach this Spanish empire masterpiece, but it is definitely worth it. One last word: don't go around asking for el Aqueducto del Padre Tembleque. From my experience, most people won't know what you are talking about. However, los Arcos are well known by locals. And, that way, you'll be sure to visit the most impressive stretch of this 48-km long linear site. 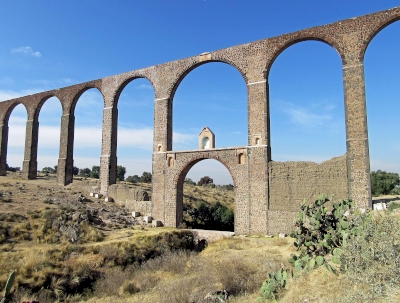 It's not that aqueducts aren't impressive, but I have much stronger memories of my conversation with my taxi driver on the way to and from the Aqueduct of Padre Tembleque Hydraulic System in January 2017 than I have of the actual aqueduct itself. After my visit, I'm still not sure exactly what it adds to the list. The Romans were constructing aqueducts with skill across Europe (see Segovia) many centuries before the technique was brought to the Western Hemisphere; I'd be more impressed with recognizing indigenous water management techniques. What constitutes the importance of this aqueduct to UNESCO, though, is the use of adobe, an adaptation of local building techniques, which enabled the construction of the picturesque span over the valley near Tepeyahualco. This main span is what draws most visitors, and it is the section I chose to visit. A sign near the parking area gave me some background about the route of the aqueduct, and a path allowed me to walk next to the tall arches. All told I didn't need much more than a half hour to visit this site; the remainder of my trip I spent in a fascinating but fretful conversation with my taxi driver, who used to live in the United States, about the future of Mexican immigration to the US after the presidential inauguration that week.

Logistics: The Aqueduct of Padre Tembleque requires private transporation, but can easily be paired with a visit to nearby Teotihuacan; I chose to hire a taxi to take me to the aqueduct in the morning and then drop me off at Teotihuacan to spend the remainder of the day. 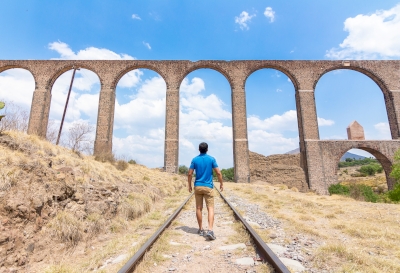 It's a little bit odd that my first ever review on this website is on Aqueduct of Padre Tembleque Hydraulic System--a site that was not even in my original itinerary. With a little bit of encouragement from this community (thank you guys!), I decided to visit the site as part of a day trip from Mexico City.

As indicated in the UNESCO website, this site encompasses a water catchment area, springs, canals, distribution tanks, reservoirs and the arcaded aqueduct bridges. It was only the aqueduct bridge that we visited, simply because this is the more obvious and a more representative element of this site. The nomination file states that this hydraulic system was "an outstanding example of water conduction in the Americas" at the time, and is a perfect example of the "exchange of influences" between Europe and the Mesoamerican indigenous peoples.

As suggested in the other reviews, my friend and I decided to combine Teotihuacan and the Aqueduct of Padre Tembleque on a day trip from Mexico City. We ventured to these sites on Monday. With the help of a GPS navigation app, we were able to get to the aqueduct from Teotihuacan in 40 minutes. The drive was smooth and there was a portion of the highway near the site where you could see the entirety of the aqueduct. From my observation, it'd be a challenge getting to this site by public transportation.

A dirt road welcomed us as we approached the aqueduct. For some reason, arriving at the site made me feel like we were in an isolated, neglected area, which was probably reinforced when we saw how shabby the very few signages were. I was kind of expecting that the government of the state of Hidalgo would put a little museum or even a ticket/guest booth after the site was inscribed, but there was none. When we parked our car at the edge of the aqueduct (no parking lot by the way), we were greeted by a police who we were pretty sure was VERY LONELY AND BORED. We thought he was going to apprehend us for parking very near to the aqueduct, but he just took our plate number for registration. Apparently, he's the guardian.

We walked alongside the aqueduct and stopped when we got to the railway. We took several photos and enjoyed the surrounding landscape. My friend headed back to the car as he couldn't take the intense sun, but I continued and even thought of going down to the creek. When I saw the lonely policeman following me, I ditched the plan. I like how a tiny "altar" containing a figure of Mary was perched in the middle of the highest arcade. After about half an hour, I decided to go back and when we were just about to leave the place, we saw a shepherd herding different livestock under the aqueduct. It was such a pretty sight.

I believe the site adequately satisfies criteria I, II and IV of UNESCO, although I would say that the site's strongest point is justifying criterion II. Obviously, the Spanish colonialists had to make use of the indigenous labor and integrate the architecture with traditional methods and materials. Was it a representation of a masterpiece of human creative genius for "integrating the highest single-level arcade from the Roman times to 16th century"? I'd leave it to the civil engineers and historians.

I enjoyed the short time we were there, although the government could've done a better job in preparing and maintaining the site. I know the "ruggedness" adds to the level of authenticity but the fact that most of UNESCO WHS of Mexico have been manicured to cater to travelers, why couldn't they do the same to the aqueduct? I bet the lonely policeman would be happy if they do.

All information about the site's attributes, history and other facts were retrieved from this site's UNESCO page and nomination file written by Instituto Nacional de Antropologia e Historia (2015).

Recently visited this site - before it made the list and consequently information at the site is pretty thin on the ground. The structure is quite impressive, and the length is even more so. I visited probably the most impressive bit - same picture as previous poster has put up. Getting here, as long as you have your own car is quite straightforward, and it was on our way from the coast to Teotihuacan. See this place in the evening, then night stop at Teotihuacan and then as long as it sin't a weekend get to see the pyramids all on your own at 08:00.

Hopefully now being added to the site they will do something to clean up the river passing through the valley - just needs a bit of tidying really. there were lots of locals there, picnicking and a few on horseback, not sure why they were there. 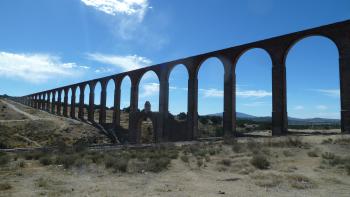 As a spectacle the aqueduct is pretty impressive but the story behind it reveals an interesting aspect of the European settlement of the Americas.

For me the most interesting thing was how early in the European settlement this piece of infrastructure was built. It was started in 1553 (only 30 years after the conquest of Tenochtitlan) as such the impressiveness is somewhat amplified by its age. It shows how European authorities attempted to shape their environment, in a way that the native groups hadn't done before. There are also traces to show how native slave labour was used in the construction as there are apparently seals highlighting the works of indigenous masons, I had a quick look but couldn't find them.

The whole structure is rather long (48km), most of it runs underground but there are three above ground arcades as they cross valleys, we visited the largest of these just outside the town of Santiago Tepeyahualco.

It is actually only about 30km from Teotihuacan, however the slow progress over cobbles in town and the lack of an eastbound access point to the highway make it a slightly longer journey than it seems on paper. Amazingly the gravel track beside the aqueduct was even fitted with two newly constructed road bumps; it was nice to see that nowhere was immune to this peculiar addiction of the Mexican road system.

A visit can be over and done with in five minutes, but the main aqueduct we visited was interesting and tells a rather fascinating story in the European conquest and settlement of the Americas.

We found this quite by accident. I was amazed by the work and the enormity. It was incredile. Unfortunately, there was no one to tell us about the site and no signs. So now I am left to search the internet to explain what I saw.

Originally a serial nomination of 3 sites, reduced to 1 at the recommendation of ICOMOS by the State Party on 16 February 2015

Greenhouses marring the scenery at Aqueduct of Padre Tembleque (24.07.16)