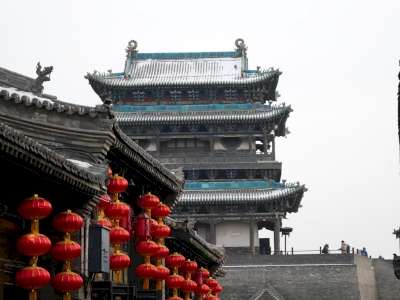 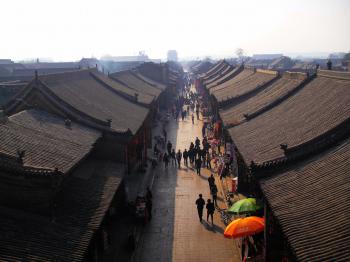 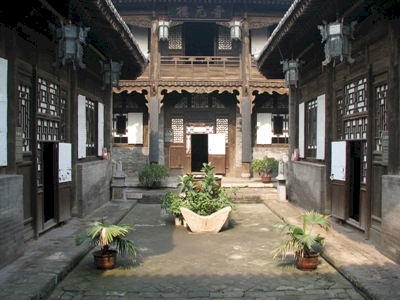 There are two sides to Ping Yao. I stayed there for 1.5 days and at first I noticed mainly its poor living conditions. When you look down at the town from its city walls you see a lot of dust and dirt and cramped housing. There are quite a number of public toilets, from which I deduct that many houses don't have private bathrooms. In my first half-hour roaming around the city's backstreets, I also came across two men peeing in the street (and they were neither drunk nor beggars).

Later on, I began visiting the courtyard buildings and temples that are now in use as museums. That is where all the wealth was. Behind a simple-looking entrance there are vast complexes. The bank, the service where one could hire armed bodyguards, the judicial court with its prison and torture instruments, the chamber of commerce and the residence of the founder of the first bank, Lei Lutai. There's even a shrine where you can pray to the God of Wealth!

There are many guesthouses with a traditional courtyard setting where you can spend the night. I did so at Yide hotel, situated in the 18th-century house of tradesmen. This is well recommended: it's a welcome change to sleep in a bare room on the ground floor where fresh air and neighbourhood noises come in, after all those highrise Chinese business hotels that look the same. I even enjoyed the bean bag pillow and slept like a log.

Heavy rains damaged section of a wall in the historic town of Pingyao (12.10.21)