City Walls of the Ming and Qing Dynasties

City Walls of the Ming and Qing Dynasties is part of the Tentative list of China in order to qualify for inclusion in the World Heritage List.

The architectural planning design and usage purposes of the City Wall in Xingcheng have retained the planning theory and military culture of a Chinese ancient city. The City Wall in Xi'an is the representative of the Chinese rampart architecture at the later stage of the Middle Ages and is the witness of the civilization of the Ming and Qing period with its large scale and well preservation.

Map of City Walls of the Ming and Qing Dynasties 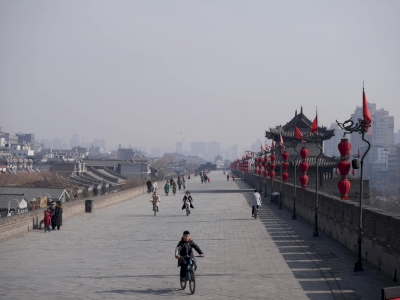 In the twilight days before Covid exploded, I visited Xi'an. It was the third week of January 2020, the week before Chinese New Year, that I came. The city was decorated with red lanterns. The trains were packed with travellers heading to their families. And a fairground was set up on top of the Xi'an city walls around the Southern gate. Imagining a full blown carousel on a city wall should give you an idea of how massive these walls are (12m wide). My picture should provide some insight, too.

The fortification was started in the 15th century with the final form being achieved in the late 18th century. The form is rectangular with a total length of 14km. The style clearly is Chinese and the most notable structures are the main gatehouses. Personally, I liked the Western one best as it had no traffic, unlike the Southern and Northern ones.

At 12m height, you also get great views of the city center and the suburbs with their many concrete buildings. The ever present fog (smog) actually set the mood quite nicely.

You can find me in the forum arguing that Xi'an as a city is a top missing site and I stand by it. The city is great and should be inscribed as a single site instead of piece-meal with a City Wall here, a Silk Road site there and who knows what in the future.

Now, looking at the City Wall itself, the scale is massive and the preservation great. You can walk (or better ride) around the whole town with all gates intact. While I would prefer a city (Imperial Xi'an) inscription, the walls would make a fine addition on their own.

Xi'an is connected to all parts of China by rail or flight. Note that the fast trains can sell out fast, so reserve in advance. Flights in China are a complicated matter on their own due to airspace restrictions and the airports being built way outside of town.

In Xi'an you can take the metro or walk. Entries to the wall are at the main gatehouses. On the wall, if you want to cover the whole circumference, it's best to rent a bike.

Obviously, you should visit the Mausoleum of the First Qin Emperor. The city itself also holds two silk road sites (the two goose pagodas) plus the Xi'an Mosque that currently is part of two separate Chinese Silk Road (T) sites (1 & 2). Probably, the double T-Site listing is due to a data quality issue. Also part of the Chinese Silk Road (T) are the Weiyang and Daming Palaces.

Non WHS, the Belltower in the city center is hard to miss. Personally, I am bit sad to have missed the Nestorian stele in the Beilin museum.

You can also do day trips to Pingyao or Luoyang (Longmen Buddhas, Shaolin monks, more Chinese Silk Road (T)). Pingyao is a good stopover when travelling between Beijing and Xi'an. Luoyang was another of the Four Great Ancient Capitals of China. 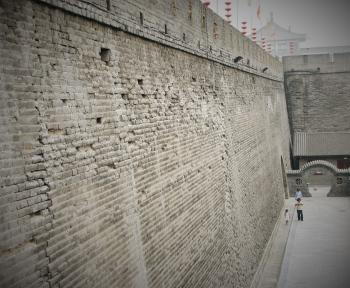 Relatively few intact city walls are left in China, particularly when put in contrast to how many walled cities existed previously during China's dynastic periods. The Xi'an City wall is one of the best preserved (to my knowledge). The wall is immense, large enough to drive a car on. Spectacular site, but don't expect the best views until Xi'an, like much of China, improves the air quality.

There are some indications that a expanded nomination will be brought forward soon. I would welcome both the nomination and the chance to visit other representative fortress architecture in China. As you walk, you can catch some views of the Silk Road sites that make the city famous.

Unesco Website: City Walls of the Ming and Qing Dynasties