Chinese Section of the Silk Road

Chinese Section of the Silk Road is part of the Tentative list of China in order to qualify for inclusion in the World Heritage List. This site (or parts of it) has already been inscribed under Silk Roads WHS.

The Chinese Section of the Silk Roads includes the Land Route and Sea Route. The Land Route is the ancient trade route that starts from ancient Chang'an, the present-day Xi'an city and the center of politics, economy, and culture in a long period of ancient China. The Sea Route is the maritime trade route connecting the East and the West, distributed along the coastal lines and particularly represented by the sea port cities like Guangzhou, Quanzhou, Ningbo and Nanjing. The Silk Roads is an excellent example for coexisting, communication and melting of multi-cultures.

Map of Chinese Section of the Silk Road 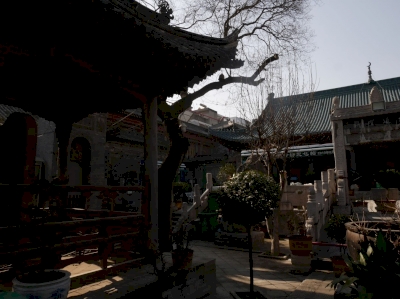 Xi'an is a culturally rich city. Being one of the prime cities of China and a former imperial capital it was part of the great trade network of the Silk Road. Indeed, it already holds four components of the existing Silk Road WHS: the Giant Wild Goose Pagoda and the Small Wild Goose Pagoda, the Daming Palace, and the Weiyang Palace.

I visited the Xi'an Mosque and I would clearly place it as a site that should have been included in the existing WHS with the other Xi'an locations. In China, it's the third oldest mosque. And it's not that much younger than the oldest mosques in the world. The fact you find a mosque in China dating back back to 742 CE shows the strength of the trade network. The building has both the features of a mosque as well as the layout of a Chinese temple. My photo should give you an impression.

Unfortunately, I missed several components along my visit to China:

As stated in my Xi'an Walls review, Xi'an Imperial City should be a world heritage site. The Silk Road nomination feels like an unnecessary consolidation price for what is a great site on its own.

I would also approve of an Early China Mosques sites combining Guangzhou and Xi'an. I am not convinced, though, of creating yet another Silk Road serial site.

This post is posted for two tentative sites. The Chinese have managed to create two distinct Silk Road tentative sites. Both seem to be nominated for 2022, though, so I assume they will be merged eventually. Lucky me, Xi'an Mosque is included in both.