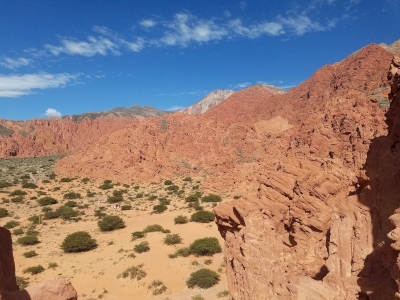 I visited Quebrada de Humahuaca in March 2022 after almost seven weeks in Argentina. Already in 2008, Els was surprised to write the very first review of this site, which is well on the classic path of backpackers and tourists in South America. It is even more surprising that only one other member of this community has visited the site and written a review since then and that this one dates back to 2009. Thirteen years later, I invite you on another four-day tour of the Quebrada. I spent three nights in a hostel in Tilcara, where I had come with a direct bus from Salta (beautiful city by the way).

First, after settling in at the hostel, I spent the rest of the afternoon surveying the Pucará de Tilcara and the adjacent Jardín Botánico de Altura. This ruined fortification is the main evidence of pre-Hispanic cultures in the area. The site is well laid out. They give you a pamphlet at the reception with the main information to understand the site. The problem is that this site and its visit is more of a lesson on what not to do as an archaeologist. You learn that the archaeologists of the mid-twentieth century rebuilt the dwellings with different materials and techniques than those used at the beginning, that they contaminated some areas of the site by transporting large quantities of soil and that they destroyed part of it to build the monument in homage to the archaeologists, a monument which, by the way, is inspired by the pyramids of Mexico and therefore has nothing to do with the pre-Hispanic culture of the Quebrada. The view from the Pucará is however magnificent.

For my second day, I used the services of an agency to visit the south of the Quebrada. We started with a quick stop to photograph the Cerro de los Siete Colores in Purmamarca. We continued to the Salinas Grandes (not in the core zone). For me, who has never been to Bolivia, I found the spectacle really striking and I enjoyed learning about the exploitation of salt. We then returned to Purmamarca for some free time. This small village is nice, but very touristy. What is left of its authenticity smells like a business for tourists. Notice the cabildo and the colonial church on the main square. Check out the ceilings of several buildings made of cactus wood. Just outside of town, the Paseo de los colorados is definitely worth a visit for the spectacular colored rocks. We made a last stop on the way back to photograph the Paleta del Pintor and the cemetery of Maimará. I also had about 20 minutes to visit the Museo Arqueológico Eduardo Casanova. It has some nice pieces, but I didn't have enough time before it closed to really appreciate them.

I spent my second full day in the Quebrada exploring the northern part, Uquía and Humahuaca. Buses run hourly along the valley road, stopping at each village to pick up passengers. In Uquía, there is the famous Iglesia de San Francisco de Paula. It is all white, low and relatively unadorned, but is famous for its paintings of angels armed with colonial guns. I would have been disappointed to have come to Uquía only for that. However, it is also the starting point of the trail in the Quebrada de las Señoritas. This canyon is the most spectacular trail and set of rock formations I have seen in the Quebrada de Humahuaca. Be sure to follow the two trail branches, one in the narrow canyon and the other further south (follow the route on Maps.me for this one, but don't go any further without a guide and climbing skills). In Humahuaca, a rather uninteresting town, I visited the gigantic Monumento a los Héroes de la Independencia and the market in the main square.

For my last day before leaving for San Salvador de Jujuy, I opted for another hike, this one on my own and directly from Tilcara. The Garganta del Diablo is a deep canyon containing a small waterfall just south-east of the town. This area is not as beautiful or unique as the Quebrada de las Señoritas or the Salinas Grandes, but it was worth the effort and kept me busy for half a day.

In conclusion, this is one of the sites I found most difficult to rate. I loved the four days I spent in the Quebrada. The landscapes are extraordinary and the canyons and rock formations are spectacular. However, the cultural aspects are rather poor in my opinion, which is problematic for a cultural site and not mixed or natural. Indeed, the typical adobe houses are interesting, especially those with typical cactus wood ceilings. La Pucará represents a nice effort to share their history, but it is not of World Heritage caliber in terms of preservation. The Quebrada is a living cultural landscape, heavily impacted by tourism, and whose authenticity is difficult to capture. I therefore opted for an average rating that better reflects my appreciation of the area. The take-home message, despite my criticisms, is that this is an exceptional place. Go there!

Slow Food Movement: Potatoes
Twin Towns: Tilcara and Maimara are in such strong rivalry that it sometimes comes to physical violence between their inhabitants
Minority communities: Most local population identifies as Kolla (who are the descendents of the Omaguaca). Their traditional language was Cacan but it was later given up in favour of Quechua (still spoken in the area) and Spanish
Built or owned by Spanish: Posta de Hornillos, created by the colonial rulers in the Viceroyalty of the Río de la Plata
Largest cultural WHS: 172,116 ha