Civil Rights Movement Sites is part of the Tentative list of United States of America in order to qualify for inclusion in the World Heritage List.

The Civil Rights Movement Sites represent seminal events in the mid-20th century African-American civil rights movement in the United States. The sites chosen highlight the use of non-violent techniques, such as those conducted by Mahatma Gandhi, in the face of persecution to effect social change. The Civil Rights Movement in the United States inspired other civil rights movements around the world, and helped ensure the passage of the United Nations’ International Convention on the Elimination of All Forms of Racial Discrimination in 1965. 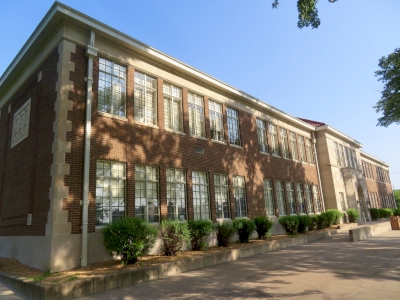 While touring the 16th Street Baptist Church, the docent shared stories of segregated Birmingham and the challenges of integration. One of the docents was part of the "Children's Crusade" demonstrations which gathered around 16th Street Baptist Church. Under Alabama law, demonstrators who protested racial segregation were arrested. Police dogs, high-pressure firehouses were used to disrupt these protests, which should be noted were occurring in Black Birmingham. My spouse, who only recently became a US citizen was astonished by the extent of the racially segregated architecture, town-planning, and landscape design in Birmingham. She is not unfamiliar with American History, but the racially-based system generally is understood at the surface level (restrooms, schools, restaurants, public pools, drinking fountains). In fact, the boundary of Black and White Birmingham met on 18th street, only two blocks from the 16th Street Baptist Church. The grid of Black Birmingham is not hard to trace. In January 2017, Barack Obama designated 15th-17th streets a National Monument, which includes the 16th Street Baptist Church, Kelly Ingram Park, Birmingham Civil Rights Institute, A.G. Gaston Hotel, the Masonic Temple, and Bethel Baptist Church (the later component is 3 miles away). Today, the 16th Street Baptist Church is most associated with and known domestically for the KKK domestic terrorist bombing that killed 4 young girls as they put on their choir robes for Sunday School. The church itself looks "fortress-like" and it is a marvel that it withstood 19 sticks of dynamite. The docents go to great lengths to show a more complete timeline of the churches long history. It's important to note that the church, along with the A. G. Gaston hotel (a notable establishment in Green Book guides), and the Masonic Temple were prominent pillars of the Black community in Birmingham. Indeed, the Masonic Temple was used by Civil Rights Leaders for its size and its perception as "bombproof".

The Monroe Elementary School in Topeka, Kansas has been identified as an additional component to the nomination. As named, the Brown v. Board of Education National Historic Site (managed by the National Park Service), the interpretation, panels, and multimedia are excellent. The park rangers here are collectively phenomenal. Now you might expect that Monroe Elementary School to be a "White Only" school, but in fact it was a school for black children. The next thought visitors (myself included) tend to have is that the school would be inferior to the nearby "White Only" schools, which is also untrue. Monroe Elementary was virtually identical in size as the "White Only" schools in Topeka, teachers got the same pay, and materials/resources were comparable. Throughout the South you can find numerous examples of the profoundly different quality in "White and Black" schools. Monroe was specifically chosen for a class action lawsuit because it was the ultimate manifestation of the segregation policy "Separate, but Equal". Segregationists pointed to examples like Monroe as evidence of the equal status afforded citizenry in regards to racial-based infrastructure. If the NAACP could prove with Monroe school that "separate educational facilities are inherently unequal" then the whole system would begin to collapse. Ultimately, the Supreme Court sided with the NAACP that even in cases like Monroe Elementary the very act of segregation itself, not simply the facilities alone, harmed the child.

I did not tour Dexter Avenue King Memorial Baptist Church (just viewed the exterior). However, I will note a couple important facts. Firstly, the location is only steps from the Alabama State Capitol, which is also referred to as the "First Confederate Capitol". Moreover, the steps of the Capitol were the final location of the Selma to Montgomery March in 1965. Confederate Monuments, including statues of Jefferson Davis (President of the Confederacy), and the "First White House of the Confederacy" are located in and around the Capitol Complex. The stark dichotomy of this small brick church within sight of the sparkling white Capitol Complex, which is filled with symbols of the Confederacy? That within itself made the site spatially interesting. One important contextual and often emotional visit that should not be ignored in Montgomery is the Legacy Museum and its associated site "The National Memorial for Peace and Justice" (free shuttle service is available).

If you are visiting Selma from Montgomery, you will be driving on the Edmund Pettus Bridge. Just after crossing the bridge there is an interpretive center and a couple blocks more is the Brown Chapel AME Church, which played a pivotal role much like other Historic Churches included in the nomination. Every March, commemorations occur to mark the anniversary of "Bloody Sunday". If possible this would be a particularly special time to visit. View this video of the 50th Selma Bridge Crossing Anniversary.

The Martin Luther King Jr. National Historic Park (managed by the national park service) in Atlanta is quite large, but was partially closed because of COVID restrictions. This site, which has been identified as a likely component may align with the boundary of the National Historic Park or it may only include Ebenezer Baptist Church. The greater property includes the burial place and childhood home of MLK. Other Human Rights Activists are celebrated throughout the park. Dr. King Sr. was a pastor at Ebenezer and Dr. King Jr. was co-pastor with his father from 1960 to his assassination in 1968.

Many of you know the Lincoln Memorial as one of the common visitor highlights of Washington D.C. As the location of major speeches (MLK was one of ten speakers) given by major Civil Rights Icons during the March on Washington in 1963, it has been proposed for inclusion. There is a plaque on the location where MLK stood when delivering the "I Have a Dream" speech. The symbolism of the Lincoln Memorial in the background on the one hundred year anniversary of the "Emancipation Proclamation" was intentional and plans began in earnest starting in 1961.

It may be pertinent to the History just discussed to know that Birmingham's population is 70% Black and in the 1960's before the dismantling of law-based segregation it was majority Black then too. This also manifests itself in local politics, the Sheriff and mayor are black and have been since the 1970's. This perhaps challenges some stereotypes people have of the South. In fact, the majority of police officer involved shootings of Black men or women are actually far less common in Atlanta, Birmingham, and Montgomery (all Black majority cities) compared to other parts of the country.

In regards to world heritage prospects, this will be a highly complex nomination and it has been continuing to evolve over time. Currently, sites in 8 states and the District of Columbia are identified as the most appropriate components. There are inherent controversies, some of which have been discussed here. The reality of racial discrimination, anti-blackness, and racial bias in the United States is one that has proven durable and remains visible to this day. One of the essential questions in our national (messy) public discourse over the past few years: How much of the "infrastructure" of White Supremacy has been truly dismantled? Therefore, for some it may be problematic to designate a world heritage site that's OUV is directly tied to the dismantling of white supremacist infrastructure as practiced during Jim Crow Segregation. One thing remains constant in the United States, as a nation that will become majority non-white between 2041 and 2046, the United States as the world's most prominent example of a multi-racial Democracy continues to change and evolve. My spouse, who was initially skeptical of a "Civil Rights Movement" world heritage site emerged more supportive after specifically visiting the 16th Street Baptist Church, the Legacy Museum and Memorial, and the Brown v. Board of Education National Historic Site. Part of her perspective (as she explained) was that more people should know this History, particularly Americans. 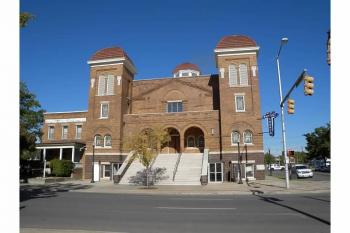 In October 2011, after a business trip to Atlanta, GA, I drove to Alabama and visited Birmingham, including the 16th Street Baptist Church and Bethel Baptist Church, which are included in the Civil Rights Movement Sites on the tentative list of UNESCO World Heritage Sites. I also visited Rickwood Field, built in 1910 and the oldest surviving professional baseball park in the United States, and Sloss Furnaces, which operated as a pig iron-producing blast furnace from 1882 to 1971 (www.slossfurnaces.com/). After lunch at Irondale Cafe, opened in 1926 (www.irondalecafe.com/), I attended the Talladega 500 at Talladega Superspeedway.