La Camargue is part of the Tentative list of France in order to qualify for inclusion in the World Heritage List.

La Camargue is a wetlands area between the two arms of the Rhône Delta in Provence. The core of the Camargue around the saltwater lagoon Étang de Vaccarès and the strip south of it towards the Mediterranean Sea is protected as a nature reserve. It is an important wintering area for migratory birds and the habitat for numerous endemic birds, the most famous species being the pink flamingo. 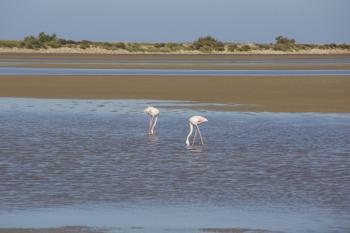 La Camargue (Grande Camargue) is the landscape between the two arms of the Rhône delta, the Grand Rhône to the east and the Petite Rhône to the west or between the cities of Arles, Salin-de-Giraud and Les Saintes-Maries-de-la-Mer. However, the T-list entry describes the Carmargue only as a natural site, comprising 20.000 hectares of the nature park and biosphere reserve. This area consists mostly of very shallow lakes (French: étang), reed-covered marshlands, and a long sandbank on the seaside. The Camargue is the habitat and breeding area for several bird species, the best known is the flamingo, and many migratory birds overwinter in the Camargue. Therefore, large areas are not accessible to visitors.

We started from Arles with our rental car and drove on the Route de Filouse (D36B) along the eastern side of the Etang de Vaccarès, the largest of the Camargue lakes. The road passes close to the shore of the lake and flamingos can be seen even from the car, usually in groups of up to ten birds. You can stop at various vantage points and watch the birds, e.g. at the information centre La Capellère.

In Salin-de-Giraud we rented bicycles and we cycled on the Digue à la mer towards Les Saintes-Maries-de-la-Mer (about 30 km). In the first section along the Étang de Fangassier we saw a lot of flamingos and other birds, later the path leads close along the coastline. It is not allowed to walk on the dunes, but there are marked trails to the beach and the waterside. The scenery is absolutely flat and plain without any elevated point. The only landmark is the Phare de la Garolle, about halfway to Les Saintes-Maries-de-la-Mer (the photo is from the area close to the lighthouse). We really enjoyed our bike tour, the almost deserted landscape was a pleasant contrast to the tourist hotspots in Provence. But after a while it was a bit boring, in particular because bird watching is not one of my favourite activities. The views are more or less similar everywhere, the only variation is whether flamingos can be seen or not and how much of them.

South of Salin-de-Giraud are extensive salt pans. There is a viewing point two kilometres from the town overlooking the artificial salt evaporation ponds, where you can also buy overpriced Fleur de Sel. However most of the produced salt is for industrial purposes.

The western part of the Camargue is more popular with tourists. Along the road to Les Saintes-Marie-de-la-Mer are several farms where they breed bulls or the famous Camargue horses. The town itself is a typical seaside resort, the shops and bars are similar to those in many other towns at the Mediterranean coast. The church of Notre-Dame-de-la-Mer is nice, you can climb onto the roof and have a panoramic view over the sea and the surrounding countryside.

I do not know if there are plans for a nomination of the Camargue in the next years. If so, I think it is reasonable to nominate it as a natural site and not as a mixed site or as a cultural landscape. Though I am no expert in ornithology and can not assess whether an inscription would be justified. But the cultural features - salt production, rice paddies, horse and cattle breeding - are not unique and outstanding and the commercial uses could probably lead to conflicts with the requirements of the WHC.

When compared to other European natural WHS, I believe that Camargue has a great chance of being included in the list. However, as a truly WORLD heritage site I don't feel it offers a universal value. A great place to admire pink flamingoes, herons, stilts, terns, etc. in Europe.