Risco Caido and the Sacred Mountains of Gran Canaria Cultural Landscape are testimony to the pre-Hispanic culture of the island. 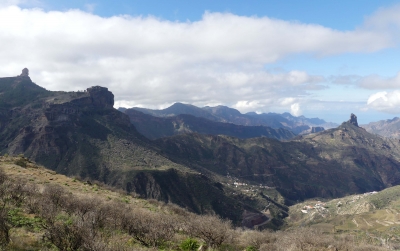 Spain’s apparent objective of gaining WHS status for all of its islands continues in 2019 with Gran Canaria (GC) - Menorca is next in line for 2022! Serendipity, rather than an obsessive chase after potential upcoming WHS, took us there for just 1 day in Jan 2019 and we fitted in a visit to the nominated site of “Risco Caido and the sacred mountains of Gran Canaria Cultural Landscape”

The Canaries (population c2.2 million) already have 3 WHS. A “colonial town” (the rather “average” San Cristobal de Laguna), “Volcanism” (Teide NP) and “relict Macronesian vegetation” (Garajonay NP). So - what could be left for other islands – a “near duplicate” of one of the former subjects? Luckily there is an, as yet unrepresented, possibility - the archaeological sites of the pre-Hispanic inhabitants of the Canaries, known as the “Guanche”! They are considered originally to have reached the Canaries from N Africa some time after 1000 BC (possibly no earlier than 500BC) and to have been of Amazigh (Berber) origin. By the time of CE they had, on each island, developed a range of different but similar cultures and appear to have remained reasonably isolated from their continental neighbours until they were invaded in 1402 by a Norman adventurer working for Castille - Jean de Béthencourt. Although they only had primitive weapons, some of the islanders put up strong resistance, and their final defeat took until 1496. Subsequently they were “ethnically and culturally absorbed by Spanish settlers” (Wiki). Genetic studies have shown significant Guanche DNA content among current Canarians, which no doubt contributes to their pride in their pre-Hispanic history.

But, what form should such a nomination take? We had visited the Museum of Nature and Man in Tenerife which contains a fine section on the Guanche  (“considered the best repository of objects from the Pre-Castilian Canary Islands” - Wiki) and gained the impression that Tenerife perhaps contains the greatest number of Guanche remains in the Canaries. They are, however, rather spread around the island with no particular location standing out. GC also has a fair number of such sites including a major one in the form of the Cueva Pintada in Galdar . Spain could presumably have “picked and mixed” from among these across the islands (and even included examples from the, as yet, unrepresented islands of Fuerteventura and Lanzarote) - or else have homed in on just one representative site (E.g Cueva Pintada?). Instead it has followed a route which has recently proven so successful for many States Parties, by choosing a larger area with multiple remains and badging it as a (Relict) “Cultural Landscape” (CL)

The one chosen is centred on the “Caldera de Tejeda” in the NW of GC - a spectacular landscape of eroded volcanic peaks with deep ravines and pinnacle rocks. Anyone visiting GC would try to include a visit simply for its scenic/natural values. But, in addition, it contains a good selection of Guanche remains. I quote from a Visitor Centre notice board – “The Cultural Landscape of Risco Caido and the Sacred Mountains is a vestige of the indigenous society that continues to exist in a well preserved natural environment. The entire protected area is part of the Gran Canaria Biosphere reserve and accounts for about a third of the same. The main heritage landmarks within this cultural landscape are the archaeological sites of the ancient Amazigh societies of the islands, especially those linked to the archaeo-astronomy and fertility rituals of their symbolic and ritual world. There are 4 main archaeological complexes in this privileged location”

Note the reference to “Archaeo-astronomy”. This is becoming something of a Spanish “speciality” (see my review of Antequera!) but, in this case, Spain has also tapped in to the “Dark-sky movement” with GC already majoring on its merits as a tourist destination in this respect. It thus claims that the sky is as much a part of the “landscape” as the ground and the sea such that its “natural” clear state should be preserved and then neatly links this to the nominated CL on the basis that the Guanche used the stars in positioning their structures and in their rituals!

GC isn’t very large and one might think that it would be possible to visit all/most of the 4 locations reasonably quickly. Roads, however, are very twisty and slow (but well engineered) and it takes both a fair time to reach the area and to travel around/walk to the precise sites. Our GPS consistently under-estimated driving times - e.g the 43kms from Sta Cruz to the village of Tejeda at the “centre” of the Caldera (not included in the nomination) took 75 minutes to drive! We only had 7 hours in all and eventually only fitted in 1 of the 4 complexes plus a couple of other sites. To a greater or lesser extent, all of them contain similar “typical” remains of man-made troglodyte caves, ritual sites, burial chambers, granaries, and carvings/paintings. The excavated remains of pottery, carved figures, “mummies” and tools etc will need to be seen in musea or visitor centres (The “Mummies” in the Tenerife museum are regarded as “World significant” by aficionados of such matters - so that also extended our “Mummies of the World” tick list!!).

Risco Caido – Barranco Hondo. This contains perhaps the most famous of the archaeo-astronomical sites - the “Sanctuary” is a cave (photos) with a man-made oculus through which sunlight shines at specific times. This is now only available to visit with prior booking for limited spaces. The Nomination file states “An application must be filed on line to gain access……Only 36 visits were organised in 2016, with 432 visitors as part of a site conservation plan”. Here is a link which explains and initiates the process. It only operates on certain dates from May - Sept, 10 persons max but is FREE - read "Condiciones de la Visita" for full requirements, waiting list procedures, prior registration, documentation required etc etc! A visitor centre has been/is being built nearby in Artenara, apparently with a replica “sanctuary”, but wasn’t yet open in Jan 2019.
Acusa. An area of several groups of “Cave houses” (“home to one of the largest and most spectacular troglodyte enclaves” Nom File page 95 etc) around this point  28.007353, -15.679077 . Some caves are still in use (e.g as agro-tourist B+Bs) and I don’t know to what extent the more interesting are freely open.
Risco Chapin. “the site chosen for excavating an exceptional group of highly symbolic and ceremonial caves that are clearly in alignment with Roque Bentayga” (Nom file page 92 etc). Cuevas Candiles and Caballero contain significant examples of rock art – but again I don’t know how accessible they are. Google Maps shows a road to the area of the former at  28.017793, -15.633465
Bentayga. We concentrated our efforts on this “complex”. Its focal point is the “Roque Bentayga” – a fortress/troglodyte settlement where one of the last battles between Guanches and Spaniards took place. This is situated within a gated area designated an “Archaeological Park”. A road goes to an Interpretation Centre at 27.989589, -15.638337 . Entry is free but it is closed on Mondays (including, I think, the path up). The info centre is interesting if not fantastic. It shows a video which I suspect was produced for the nomination and its information boards were clearly set up utilising the UNESCO title and Nomination file quotations. The guide on duty had no information about any issues which might have emerged from the ICOMOS visit. One can climb a fair way up the rock (the notice board says 1hr but 40 minutes with plenty of viewing time was easy even for this 76 year old) past the fortress wall and various caves to the “Almogaren”. This is a rock carved area with a platform, steps, circular grooves and runnels, which is thought to have been an “astronomical marker and ritual space” (Nom file) - see site photo above. It has magnificent views including of a nearby second rock monolith - the “Roque Nublo”. Unfortunately we ran out of time in order to get back to Las Palmas for our flight and had to miss the “Cuevas del Rey” – the largest of the island’s caves with paintings and carvings and situated just 3.5kms West of Bentayga at   27.992914, -15.654362

Even though it isn’t one of the 4 “settlement” areas, we visited Roque Nublo both for its views and because it is included within the nominated area for its "current and historic symbolism" (It does apparently have examples of carvings but we didn’t see them). On our Saturday visit the hiking trail was very busy and the Nomination file identifies it as the most “pressurised” area for tourism.  My photo of the caldera is from a viewpoint outside the inscribed area but showing the “Roque Bentayga (Right) and “Roque Nublo” (left). We also visited GC’s highest point at nearby Pico de las Nieves where, if you are lucky with the weather, there is another magnificent panorama looking down onto Roque Nublo and across to Mt Teide (we were - though, within an hour it had completely clouded over). It is outside the nominated area but figures in the Roque Bentayga description thus “A final important astronomical connection of the almogarén concerns window V (certainly artificial). This clear artificial notch frames Pico de las Nieves, the highest peak of Gran Canaria where Sirius rises today”

We don’t feel that we “bottomed” this nominated WHS. It will surely gain inscription at some time and, even if it doesn’t, maybe we will return to GC when we get “really” old and do so!! In particular, we missed all of the more famous named caves. Ok, that at Risco Caido is closed, but the replica sounds worth seeing, and missing the “Cuevas del Rey” was a blow - but flights won’t wait!! If we went again I would stay in one of the Caldera villages (or even a troglodyte house!) for a couple of days. Tejeda has been badged as one of “los pueblos más bonitos de España” ….. and then there’s still the rest of the island!

Risco Caido and the Sacred mountains of Gran Canaria

Wildfires: "A mountain fire, sparked by a welder using a soldering iron, spiralled out of control in Gran Canaria, Spain, on Sunday August 11th [2019] causing mass evacuations. ... It has spread from the Artenara municipality into both Galdar and Tejeda, including the Sacred Mountains World Heritage Site and is burning through the pine forests of the Caldera de Tejeda."

Berbers: The archaeological and historic testimony of the property bear out the fact that this culture stems from the original populations from the Berber Maghreb (AB ev)

Astronomy and Astrology: "The sacred site of Caldera de Tejeda reveals the existence of multiple structures ... aligned with the rising and setting sun, particularly at the Summer Solstice and the Equinoxes"
Mathematical Concepts: Parabolic

Built in the 6th century: exceptional testimony to an extinct insular culture that seems to have evolved in isolation for more than 1500 years (AB ev)