The Archaeological Park and Ruins of Quirigua comprise an ancient Maya site, which contains some outstanding 8th-century monuments that were constructed during the reign of Cauac Sky.

Quirigua remains important due largely to its wealth of sculpture, including the tallest stone monuments ever erected in the New World. They include carved stelae and sculpted calendars that constitute an essential source for the study of Mayan civilization. 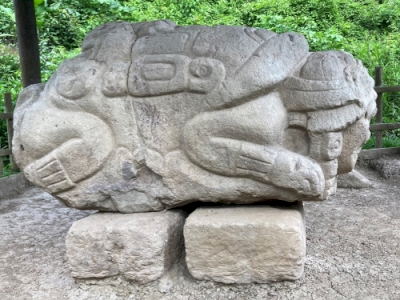 This site hasn’t been reviewed for 13 years, so I think Quiriguá deserves to be put into the spotlights. With this visit, I also completed the list of 9 WHS connected to Mayan culture. And every time you think: “I’ve seen so many Maya sites already, what can this one possibly add?” But they all have different qualities. Quiriguá has the best-preserved sculptures.

The Quiriguá archaeological park has suffered severe hurricane damage from Eta and Iota in 2020 and has only reopened in June 2021. They had to remove 12 swimming pools full of mud and water, which left certain areas flooded up to 1.8m.

During my visit in February 2022, nothing of that damage was visible anymore and the site looked very well cared for. At the entrance, you get a site-specific ticket and a booklet in English (both rare in Mexico or Central America). Signage is in both Spanish and English. There is a (new?) boardwalk that takes you along the monuments, so you don’t have to walk on the grass. It had been raining for 2 hours before my visit, and the ground had turned soggy again.

The site comprises a plaza where the sculptures have been resurrected and an acropolis with a few ruined buildings and a ball court. Parts of the site are also unexcavated, you can see unnatural hills where something must be hidden underneath. The sculptures often had fallen down or were broken when they were rediscovered in the late 19th century, they have all since been restored and each one has a thatched cover against the elements.

Directly on the first stele, I discovered something peculiar: historical graffiti from 1881. 1881 was an ominous year in the history of Quirigua, as that was when the British explorer and archaeologist Alfred Maudslay first visited. He later recorded all the monuments in detail and made paper and plaster molds of the hieroglyphic inscriptions, which were shipped to the Victoria and Albert Museum and the casts to the British Museum. It wasn’t Maudslay who made the graffiti, but in his recordings, he also referred to them.

All stelae are in exquisite condition and by far the best ones I have seen at any Maya site, even better than Copán. The site also specializes in zoomorphic and anthropomorphic sculptures, which are very good as well. The Acropolis isn’t a match for any of the other Maya sites – you really have to come to Quirigua for the stone carvings. The complex isn’t large, it takes about an hour to see it all. The site is open daily between 8 and 16.30. The area is also good for birds and I saw an agouti as well.

Quirigua lies in the south of Guatemala, only 4km from the main road that crosses the south; so with a rental car, it’s an easy visit. By public transport it also isn’t that hard: I went by bus from Guatemala City to Los Amates (4.5h with a fairly luxury coach by Litegua). From Los Amates you can take a tuk-tuk to the site, a few kilometers further along the road. To continue your journey after the visit, go to the next town Morales and catch a bus north from there for example to Flores (5.5h with Fuente del Norte, for me it included free training in staying zen because of 8(!) police checks and 2 preachers on the bus).

Before moving on, I stayed overnight at the Posada de Quirigua. This small lodge in Quirigua village is owned by a Japanese woman and has been running for 17 years. It is basic but clean and has useful amenities like hot water, wifi, and hammocks. She cooked me a wonderful Japanese dinner as well (it’s not easy to get soy sauce, nori, or even rice in rural Guatemala!). The posada cannot be found via the generic booking sites, do contact her via her own website if you want to stay there.

I appreciate the way the various organizations that could have ruined Quirigua have preserved and beautified the site. It was a thrill for me to climb the large stone temple building and look back at those magnificent, tall, twisted trees surrounding the large carvings. I have been interested in the Mayan mystery ever since teaching 7th and 8th grade history in the 1980's. I am increasingly convinced that the people who built these incredible stone cities came from Egypt, probably on the reed boats. The building technique is so similar to the early Egyptian "step" pyramids.

I was in Bananera in, I think 1970, looking into the construction of worker housing. We were taken on hand-driven rail cars to the Quirigua site. One entered via a long tunnel through the jungle and suddenly exited onto the site. A breathless experience going from the dense jungle canopy unto this field of giant stelae. The field was quite well maintained. Some other excavations seemed to be in progress, but by whom? The United Fruit Company maintained the entrance and the grassy area where the stelae were, but were not involved with the excavations. The descriptions elsewhere on this site conform to mine. We went two or three times, but we met but one American backpacker. It is not Tikal, but the stelae are wonderful, indeed.

As an archaeologist, I found Quirigua interesting, but I do not recommend it to tourists. Stop if you happen to be passing by, and check out the tallest of all the Maya stelae and some cool zoomorphic sculptures. However, don't expect much else - the site is tiny, the environment is extremely muggy, and the artwork is a lower-quality knock-off of that at nearby Copan, Honduras. Definitely, definitely, definitely visit Copan! Copan and Tikal are the two Maya sites everyone should visit, in my opinion.

The ruins of Quirigua in Guatemala do not in any way compare with those of the “nearby” Mayan cities of Tikal and Copan or of those in Yucatan such as Palenque, Chichen Itza and Uxmal. Its main advantage is its relatively easy access from Guatemala City 220 kms away on the main highway to Puerto Barrios. If you have the time or are passing relatively near by on your way to Copan (with which Quirugia was closely associated culturally) or the coast then it is certainly worth the slight detour to take in this WHS.

Its main “glory” lies in the collection of “stelae”, 9 of which are laid out around a “football field sized” central grass plaza. The remainder of the city, which dates from 8th century is largely un-restored, so you will not see the profusion of ball courts and pyramids of other Mayan cities. The stelae are however considered the finest examples of Mayan carving anywhere and, because of the hardness of the local sandstone (elsewhere the Mayans tended to use limestone), have been preserved in amazing detail

Archaeological Park and Ruins of Quirigua

Damage to the Archaeological Park and Ruins of Quirigua as a result of tropical storm Agatha (02.06.10)

Stelae: The Archaeological Park and Ruins of Quirigua contain some outstanding 8th-century monuments and an impressive series of carved stelae and sculpted calendars that constitute an essential source for the study of Mayan civilization. (OUV)
Protective Shelters: The stelae stand under thatched coverings
Pyramids: a highly elaborate system of pyramids, terraces, and staircases (AB ev)
Monumental Monoliths: Stela E: .. This enormous monolith is the largest stone ever quarried by the ancient Maya and weighs approximately 65 tons, it may even be the largest free-standing worked monolith in the New World. (wiki)

Liquid Mercury: Liquid Mercury and signs of burning used to extract it from cinnabar has been found buried in caches beneath some stelae. E.g "The cache from Group A (S.D. 16), the one associated with Monument 21, had been disturbed but what was left of the single vessel contained at least some shale (possibly a broken backing for a pyrite plaque or mirror), bone fragments, and streaks of cinnabar, along with its deriva¬tive, liquid mercury." Also Monument 26 - see
Cacao: Quiriguá was ideally positioned to control the trade of uncut jade, ..., as well as controlling the flow of other important commodities up and down the river such as cacao, which was produced as a local cash crop. (wiki)
Obsidian: "Quiriqua had became the capital of an autonomous and prosperous state : the extraction of jade and obsidian in the upper valley of the Rio Motagua, which was tightly controlled, gave rise to a profitable goods trade with the coastal ports of the Caribbean" (AB eval)

Mayan culture: The monuments of the Archaeological Park and Ruins of Quirigua are an outstanding example and the largest corpus of Maya art masterpieces. (OUV)

Writing systems: Contains Maya glyphs
Man-made Terraces: a highly elaborate system of pyramids, terraces, and staircases (AB ev)
Locations for playing sport: 2 ballcourts, one of which has been built over (wiki)
Historical Graffiti: Stele A has dates (among them 1881) and names

Built in the 8th century: Blossomed during the reign of Cauac Sky (723-84)

Built or owned by Americans: "in 1910, the United Fruit Company bought a large chunk of the Motagua valley, including the ruins of Quirigua, to set up banana plantations. Fortunately, United Fruit recognized the significance of the ruins and established an archaeological park around it, taking great pains to protect the site from looters, and organized the first major excavations through the Archaeological Institute of America."
Swan songs: Guatemala 1981
Foreigner prices: Q20 for locals, Q80 for foreigners