Castle of San Felipe de Lara is part of the Tentative list of Guatemala in order to qualify for inclusion in the World Heritage List.

The Castle of San Felipe de Lara is a defensive system from the Spanish colonial period (1644). It was built at the narrowest point of the river where it enters Lake Izabal, which connects with the Caribbean Sea. The castle was used to protect the port of San Antonio de las Bodegas against pirate attacks. 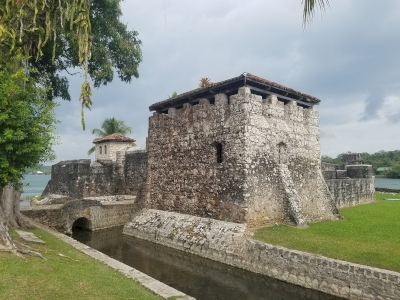 I visited El Castillo de San Felipe in December 2021 during my trip to Central America. I spent three nights in Rio Dulce, rather than the two I had originally planned.

El Castillo de San Felipe is a fortification built in 1652 to protect ships sailing on Lago Izabal from pirate attacks. The strategy is said to have kept the buccaneers away until 1686, when they captured and burned the castle. It was then modified to adopt the Vauban style in 1687-1689. It was eventually used as a prison when the pirates stopped sailing in the Caribbean.

During my time in Rio Dulce, I stayed at the Hotel Kangaroo. I highly recommend this place for its quietness, its enchanting decor, its excellent Mexican restaurant, and the warmth of its employees, but also for the possibility of renting kayaks and the proximity to the castle. I thus reached the site by paddling. Being in the water allows you to see from all angles the thick walls that repelled filibusters. I was able to moor near the castle and take some pictures from the shore. However, I did not penetrate the castle walls. Indeed, I have little interest in military works and the price was relatively high (75 Q if I remember well). All in all, the castle is nice, but not particularly impressive nor very big. It is certainly an important piece of local history, but has no universal value in my opinion.

If you spend time in Rio Dulce, you will probably also visit Livingston, a city located on the short Caribbean coast of Guatemala. I went there and back on the same day. The town is uninteresting, but some of the beaches around it are nice and the seabirds are abundant. My short stay may not have been enough to fully appreciate the Caribbean side of Guatemala. Interestingly, no roads connect the town with the rest of the country, taking a boat being the only way to reach it. The cruise to get there is beautiful though and the tour operators leaving from Rio Dulce include a diversion to the castle at the beginning of the cruise. This could be a very easy way to check off this site. On a final note, Livingston also bear an important Garifuna community, whose language, dance, and music have been inscribed in the Intangible Heritage list. However, I was not lucky enough to encounter any cultural manifestation during my visit.