In 1899 a company called 'Anglo' started a meat packing plant here on the Uruguay River. It attracted immigrant workers from over 50 countries. The factory (then owned by Liebig) was closed down in 1979. 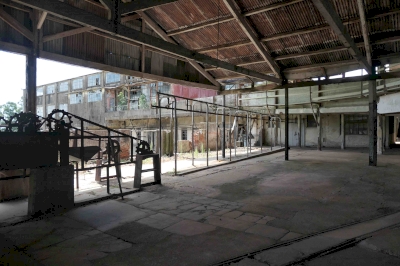 Having little idea of what I will encounter I took a bus from Salto, Uruguay to Fray Bentos which I planned as a stop on the way to Montevideo. After 4,5 hours I arrived in Fray Bentos at about 10 in the morning. I took my whole backpack to the street corner opposite of bus terminal as there are no lockers in the terminal. After 45 minutes, at about quarter to 11 a.m., a public bus full of pensioners arrived and took me in a huge detour in 35 minutes to Barrio Anglo which is named after the factory and equals the WHS. Near to the former factory gate there is a newly built air conditioned visitor center with clean lavatory, small lockers, fancy information tablets, timelines and screens and some helpful employees that informed me nicely about what to see and later also called me a taxi back to the terminal. I placed my backpack on top of the lockers trusting the employees that it was safe and made my way to the Museum of the Industrial Revolution which is located in an old factory building next to the landmark fridge storage building. Despite the name the museum covers only the history and background information about the factory and not so much about anything else. I found the museum really interesting and together with my good friend Google Translator I managed to understand a lot of the Spanish on the signs. Most interesting I found the fact that the advertisement for the stock cubes that were produced in the factory was seen as revolutionary as they were the first product that were used to get the "wife more time outside the kitchen". Also really interesting is the historical meaning of the beef cubes which were an important and much appreciated nutrition of the soldiers in WW1. When I got it right even Jules Verne let his fictious space travellers take an OXO beef cube from Fray Bentos with them in one of his books. Additionally the many different workers from the factory coming from countries all over the planet and there tremendous meaning for the factory were highlighted in the museum.

After the visit inside I walked along the factory territory outside having a look at the different industrial buildings around. Really nice is an outside photo gallery that shows pictures being made in times from when the factory was still running without any censorship. Most shocking for me was the picture of the cattle that had just died and was bleeding out together with it´s compagnions on one of the hooks in the slaughterhall. Only a few meters further I was standing right in this slaughterhall still with a lot of the original equipment that had their last duty in the 1970s. This was really a moment where I thought about my consumption of meat as I´m always happy to suppress the part of life between the cattle on the meadow and the steak on the plate.

After three hours of walking through the factory territory and visiting the museum (it´s no far distances there) I made it back to the visitor center and caught the taxi for the 4 p.m. bus which took me to Montevideo. On my way to Buenos Aires I will surely make a stop in Colonia for the other Uruguayan WHS before taking the ferry back to Argentina.

General remark to Uruguay: It´s really expensive. Even buying my usual dishes in the supermarket is more expensive than in Germany. No cheap holiday country unfortuantely as it would be nice to stay longer. 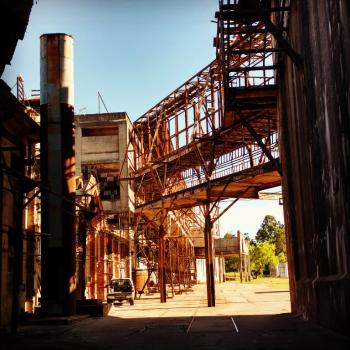 Fray Bentos is situated at the first river crossing between Argentina and Uruguay of Rio Uruguay. The main town on the Argentinian side is Gualeguaychu. And that’s where I found myself stuck after my bus from Buenos Aires ran late. Again. As all other busses in Argentina. So I missed my connection. Instead I ended up hitchhiking across the border.

The town itself is a somewhat sleepy backwater nowadays. But this wasn’t always the case. While I was making my way to Barrio Ingles (English Quarter) I crossed several nice squares and buildings. For instance, Fray Bentos has a theater, impressive for a town this size. The buildings could use some paint, but they point to the high time of the town when the meat processing plant was active.

The world heritage itself, the Barrio Ingles with the meat processing plant, is on the edge of town on the river for shipment. The plant used to supply the UK with food, the name being synonymous with corned beef. Fray Bentos was especially important during both World Wars. Operations were moved to the UK around 1960 and it’s astonishing to see how quickly the plant fell into disrepair. The brand, though, is still in use in the UK, most people not knowing what Fray Bentos actually refers to.

If you are looking for a great photo opportunity, Fray Bentos will deliver. There are plenty of great shots of ruins and decay to be taken. In addition you have great views of Rio Uruguay. As a world heritage site I am not fully convinced. The preservation of the site is poor, especially when you take into account that this is a 20th century site.

There are direct busses from both Montevideo (4:30h) and Colonia (4h). There are also busses from Buenos Aires, but these are night busses bound for Montevideo arriving at Fray Bentos at 2 a.m.

Alternatively, you can go from Buenos Aires to Gualeguaychu and try to cross the border/river from there. There is one daily bus connection between Gualeguaychu and Fray Bentos. If Argentinian busses were to run on time there would be a good connection. But they don’t. Ever. So either get a taxi. Or hitchhike (stand at northern junction).

The site is closed on Mondays as I came to learn. For certain parts you have to join a tour. Check their website. However, you can explore plenty from the outside. And if you are lucky, they don’t lock every door and you can sneak in. Not saying I did ...

When I first made up my mind to use my long holiday in Uruguay visiting my parents in law to visit Fray Bentos I couldn't resist the annoying thought of visiting a slaughterhouse as a vegetarian. It is still a part cultural history, I told myself. Thankfully, however, Fray Bentos has a lot to it other than its indispensable share of death toll. The city is situated about 300 kms or four hours drive from Montevideo (the Uruguayan capital) and about the same distance from Buenos Aires. It is next to the closest bridge connecting the two countries. The city isn't too big and you can easily walk from the city centre to Barrio Anglo which is the historic company town.

The cultural landscape includes not only the factory, but its adjacent buildings and the living quarters. You can book a guided tour to Casa Grande, which was a typical manager residence, or to the factory complex (we did both). You can also join a guided bike tour through the entire residential area including the historic tennis court and golf course. At the factory there is a little museum, but visiting it would certainly not suffice for an overview of the complex. The factory is very large and includes (apart from the slaughter room) several machine rooms, offices and a lab, all of which are open to visitors. Outside you can see the water pump and some cranes at the historic pier. The complex was very international at the time with employees from over 60 different countries. Its role in feeding soldiers in WWI and WWII so far away from the combating countries makes it clear why Fray Bentos was nominated for representing modern globalisation.

The site is extensive and worthwhile exploring. It is very well preserved and reasonably well maintained. Further work on the complex is also underway. I would recommend booking all three guided tours and dedicate a day to seeing it. We needed about 4 hours without walking to the more distant areas of the CL.

Why has a Fray Bentos factory been given World Heritage status?

Hospitals: In the residential area built for the workers
Tunnels: over- and underground tunnels for animal transportation in the factory
Historic Laboratories: Liebig laboratory - The chemical laboratory in Fray Bentos, Río Negro, Uruguay, is particularly special since it is a Research and Development Laboratory and not an Academic Laboratory

On National Border: Border with Argentina

Named after individual people: "The name “Fray Bentos” entails a certain kind of uncertainty; nevertheless, it is generally agreed that it might derive from the surname of a Friar Bentos. It seems that this hermit religious monk settled down in the area today called Rincón de Haedo, where there is now a village bearing the same name. According to historians, he founded a settlement in this place which had to be abandoned in two opportunities due to the violent Indian raids led by a native called Iramundi. Historical versions lead us to justify the subsequent self-reclusion of the religious man in a grotto found in the area of Caracoles Creek, to the South of the site where the City of Fray Bentos stands today" (The town was originally created as "Villa Independencia" in 1859)
Built or owned by British: Originally founded and built by the German "Liebig Extract of Meat Company" in 1863. It was acquired by the UK Vestey Group in 1924 when a new plant was built extending the product range from meat extract and corned beef to frozen meat. The factory was renamed "Frigorifico Anglo del Uruguay" also known as "El Anglo". "Small brick houses with thick walls running along the river's edge in Fray Bentos form the "Barrio Anglo," a city-within-a-city where meatpacking workers lived that featured a hospital, a school, a social club and a football squad" (Wiki)
Built or owned by Germans: Originally founded and built by the German "Liebig Extract of Meat Company" in 1863.