Aguas Livres Aqueduct is part of the Tentative list of Portugal in order to qualify for inclusion in the World Heritage List.

The Águas Livres Aqueduct is a civil engineering construction built in the 18th century to transport drinking water from sources in the parish of Caneças to the western districts of Lisbon. The entire network of canals and water pipelines inside and outside Lisbon covers a length of 58 kilometres, the main section extending over a distance of 14 kilometres. The visible parts of the water supply are protected with masonry. The most significant structure is the section in Amoreiras, where the aqueduct spans the Alcântara Valley in 14 pointed arches. 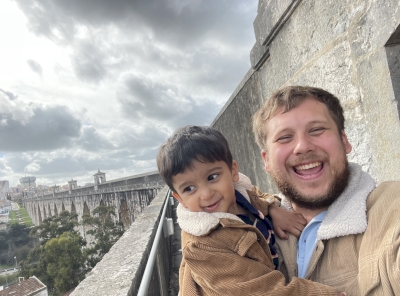 I was in Lisbon a few weeks ago and whilst there promised myself not to visit the tentative list sites as I didn’t have enough time…I broke my promise for this place. From the motorways beneath it towers over and is probably the highest one I have ever seen/been on. I have been to several aqueducts and this one was quite unique in comparison, first of all the colour! The ones in Coimbra, Segovia and Tarragona are all yellow whereas this is grey, next, rather than the water running outside, it flows internally. I have never seen the “inside” of an aqueduct before so this was quite interesting too…although you only walk through one little part of it, you can still see a long way through it. I personally think that this site deserves to be on the list and it feels that bit far and different enough from the other Lisbon sites to not be a merged one.

Little warning though (especially if you’re visiting first thing in the morning like I did) the path is REALLY REALLY REALLY slippery. I have not slipped on anything other than ice in about 20 years, so had the fright of my life when one moment I was walking along it and the next I was on the floor with a hole in my jeans and blood all over my legs. If one of the people who run it are reading this, please scrape the algae up as it’s only so long before someone seriously hurts themself or someone else here! 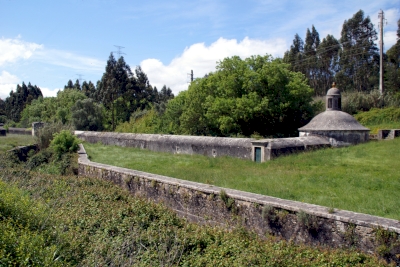 Aqueduto das Águas Livres - Aquaduct of Free Waters – what a great name for a city's water supply. However, its construction in the 18th century was financed by additional taxes, including taxes on olive oil and wine. The result is impressive, as you can see when approaching Lisbon airport from the southwest. To your left, you can spot the centrepiece of the aqueduct, the section that spans the Alcantara Valley (a few minutes earlier you have a nice view of the Belem WHS). But the Águas Livres Aqueduct is more than that, the entire canal system has a length of 58 kilometres.

The main section of the aqueduct begins in Belas, about halfway between Lisbon Airport and Sintra. Here, in Mãe d'Água Velha (photo), water from the springs was collected via a system of canals and further transported to Lisbon. The walled water pipeline and the air shafts are visible. Between Caneças and Belas, a visible part of the aqueduct runs a few kilometres along the N250 (or rather the N250 runs along the aqueduct). It was the first stop on my Portugal trip in May 2018 and only the first part of my visit to the Águas Livres Aqueduct.
The Alcantara Aqueduct is the main point of interest of this TWHS. Without a doubt, it is impressive to look up from the bottom of the valley to the top of the pointed arches, the highest being 65 metres high. But the walk at the top of the aqueduct is a little disappointing. In the 18th century, the view over the Alcantara Valley may have been picturesque, but today a six-lane motorway, roads and railway lines run under the arches. Nothing exciting in a city with an abundance of spectacular viewpoints. You can walk the entire distance of 941 metres - and back. The only entrance is on the Amoreiras side. And you can take a look inside the water pipe when changing from one side to the other about halfway.
Finally, I also visited the end of the aqueduct, the Mãe d'Água das Amoreiras, where the incoming water was stored and distributed throughout Lisbon. From the outside, the reservoir is just a simple block. But the inside is quite nice, a high room with a vaulted ceiling supported by four massive columns, a bit like a cathedral. The basin is still filled with water, but the entire aquaduct and also the reservoir was closed in 1968. Today it is used for events and exhibitions, and it has regular opening times. It's worth a detour if you are going to the Alcantara Aquaduct anyway. The staff will be happy, usually there are not many visitors.

Aquaducts are already well represented on the WH list. Although most of them date from ancient times and are only preserved as ruins, I don't think more are required.
It is claimed on the Unesco website that the Águas Livres Aqueduct "was the last great classical aqueduct to be built all over the world". I am not sure if this is true, but it is a rarely used superlative among World Heritage candidates. More often the nominations are promoted as the first in a particular category. A big plus for Águas Livres is that the entire water supply system has been preserved, it was in operation until the late 20th century. Nominations on the topic water management have been very successful at the WHC in recent years, so I would not be surprised to find the Águas Livres Aquaduct also on the WH list in the near future. 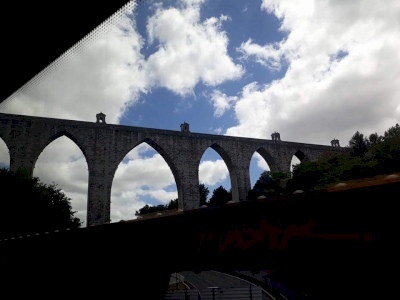 Having just passed under the aqueduct by random chance on a quick subway ride, I must say the Agua Livres Aqueduct had quite an impact. Although it's true that many impressive aqueducts were made around the same time period as it, it is uniquely majestic as being situated in and serving the heart of a world-class city like Lisbon. If not on its own merits, I'd love to see the aqueduct with World Heritage status even as part of a more comprehensive Lisbon site, and I do think that design-wise, its vast arches are really quite a unique and graceful sight to behold.

I visited the Aguas Livres Aqueduct,  namely its most famous arches over the Alcântara Valley in Lisbon. It is an impressiv structure that crosses a large valley Full of streets an modern buildings. For WHS freaks it is a nice enough walk. Here a few Infos that might help: You can walk this part of the aqueduct only from the southern end, the Museu de Agua in Calçada de Quintinha. There is no entrance or exit on the other side. Therefore you walk the same way twice. Theoretically there is a path on both sides of the aqueduct but there is only on opening that allows you to change sides. You start on the left side. I decided to change to the other side to be on the inner side of the bend to enjoy a better view. Both ways it is more then half an hour to walk but of course you can turn back whenever you choose. Beside this most prominent section the whole aqueduct extends over 18 miles. It starts supposedly at the Mae d’Agua Velha in Belas near Sintra. I couldn’t find an address of this though you can see long sections of an aqueduct crisscrossing Belas. The nomination includes also the endpoint within Lisbon, the Mae d’Agua Nova, another branch of the Museu d’Agua, which I did not visit this time. While my walk on the aqueduct was impressiv it is austere and there are no signs or explanations at all, only a brochure at the tiny reception. There is certainly potential to make this site more interesting for the normal visitor. But how interesting is it really and does it have real WHS potential? In the descriptions you can always read two things: the it follows more or less the old Roman aqueduct and that it is one of the most important engineering achievements in Portugal in the 18th century. Both arguments describe it as a site of national but hardly of global importance. If the Romans made a similar construction almost 2000 years earlier and there are comparable achievements in the 18th century they seem not really believe in its singularity.