This extension seeks to include three monuments that are currently in the Buffer Zone. The Müller Villa is an early 20th century modern residence by Adolf Loos. The Bfevnov Abbey is a Benedictine monastery in baroque style. The Hvêzda Hunting Lodge With lts Game-park is a Renaissance construction.

Map of Extension of Prague WHS 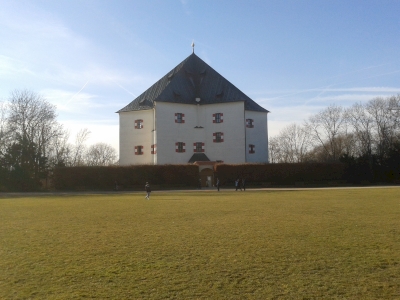 I am not sure if this great TWHS is still acive (added in 2001) as I could see an activity of the Czech state party only in proposing of series of cultural lanscapes (Kladruby stud or Erzgebirge mines), or in a bit absurd apologetics of a construction of skyscrapers in Prague.

All three sites can be visited in half a day: get-off at Metro line A (green) stop Petřiny, the entrance to former game-park Hvezda is located nearby. Then descent towards Brevnov monastery, and finally walk uphill to Orechovka residential quarter with Muller Villa (there is a tram stop of lines 1 and 2 just below the Villa).

(1) Hvezda game-park and the hunting lodge have been designed by Ferdinand (II) of Tyrol, Archduke of Austria. During his stay in Prague as the Governor of Bohemia (1547-1567), the extensive constructions in the areal of Prague castle mostly the designing of huge renaissance gardens around the castle took place. Most of them have been already included to WHS Prague. The hunting-lodge Hvezda (it means STAR in Czech) was designed by the Archduke himself for his leisure activities (such as competitions in finishing a goblet of wine as fast as possible), and it can be taken as a part of this building programm. The lodge is designed in the shape of six-pointed star (see photo), and one can partly see it from distance when going from the airport to city center by bus 119. The interior is covered by fine stucco work. Even walking around in the park - the forest is protected as natural monument - is very pleasant.

(2) Brevnov Abbey was founded in 10th century by the duke of Beohemia and bishop Vojtech and it is still active. The Abbey always played an important role in Czech history and it can be taken as an inseparable part of historical Prague. The areal is quite large with Churh of St. Margaret, the monastery, gardens, fish pond and adjacent buildings including a brewery. One can visit the remnants of crypta from 11th century and parts of the monastery, but the highlight is the Church of St. Margaret. The church and the convent from middle ages did not survive the Husitte revolution in 15th century. The church was raised from ashes in 18th century in the Bohemian radical Baroque style (derived from Italian Baroque). The interior is very airy and light, not "spoilt" by huge altar works that were painted on the wall instead. The interior is decorated by monumental oils by one of the best Czech baroque painters Petr Brandl (sometimes called as "Czech Rubens")

(3) Unlike the previous monuments, the finding of a direct connection of Muller Villa to historical core of Prague is a bit difficult, thus it would be better to propose it as the separate site. The Villa was designed by Brno-born architect, visionary (as well as a prisoner) Adolf Loos, and it is his most important example of "Raumplan". It means that there are no regular floors but all the interior is formed by interconnecting parts with their particular functions. One a little bit odd aspect is that the parts were distingueshed also by sex: the parts for men and women can be distingueshed by different color and materials. From outside, it looks like simple white block, but interior is completely different from exterior and unique. It is together with already inscribed Tugenthat Villa the most important example of house built in the international style in Czechia. I visited both villas this week, and despite they share the style of functionalism and also certain details in furniture, thay are surprisingly very different. Tugenthat is maybe too sterile and vast, but Muller even though also monumental is more intimate and better suited for normal life. Muller Villa can be visited only after reservation in advance on-line, since it is limited only for group of 7 visitors. The Villa including its garden has been reconstructed quite recently and almost everything inside is original as it was in 30s.

All in all, the 3 components of this extension are great, worth-visiting and also worth-inscription. I was thinking what other monuments outside the historical core of Prague would deserve to be WHS. Besides the 3 monuments above, I would vote for: (1) the Church of the Most Sacred Heart of Our Lord designed by Jože Plečnik. I love the church that is unique. It used to be a part of serial nomination with Ljubljana (TWHS of Slovenia), but the Slovenian state party desided to propose only the Plečnik work in Ljubljana to increase the chance to get in. Furthermore, the owner of the church in Prague, the catholic parish, does not support the inscription. The reason is that the church should serve as a church and not as a tourtist attraction, that makes sense to me. (2) My second proposal is a bit provocative: Žižkov Television Tower built between 1985-1992, designed by Kozak and Aulicky. Most people in Prague think that the transmitter is ugly and should be pulled down. My opinion is that it is unique example of 80s architecture and desrves protection.

Unesco Website: Extension of the World Heritage Site "Historic Centre of Prague" with the important Monuments in its Vicinity