The castle and associated batteries protected the canal that leads up to the harbour of Santiago.

The castle was designed by the Italian Giovanni Battista Antonelli in Renaissance style. It was built on a promontory (morro in Spanish) with steep cliffs. Series of stairways connect the various levels, with constructions dating from various ages.

The fortress has been damaged and rebuilt several times after earthquakes and piracy attacks. 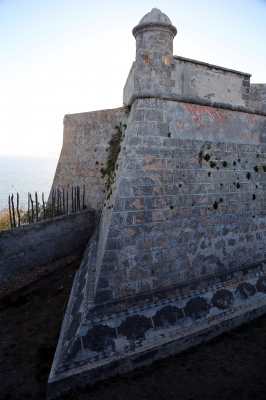 Castillo de San Pedro de la Roca del Morro is located about 10 km to the south from Santiago de Cuba on a strategic rock controlling harbor entrance. After over 150 years of painful planning, designing and construction, many times interrupted by the military attacks from competing colonial powers and pirates and earthquakes, it was more or less completed only in 1700s. The fortress served as prison once pirate threat declined in 18th century (you could visit some tiny prison cells). Castillo is considered the best-preserved Spanish colonial military fortress. It is quite compact site with stunning views over the sea, deep mounds, sharp edges and everything you expect from a military fortress. For a European eye is does not look something special but taking into consideration all the circumstances Castillo found its deserved place in the WHS list. Inside there are some rooms dedicated to the Caribbean piracy.

All in all, good site and pleasant excursion from Santiago de Cuba.

This site, known locally as El Morro, was easily reached from Santiago de Cuba at the time of my visit in February 2001. A local bus will take you to Ciudamar, a settlement on the southern shore of the almost enclosed bay with Santiago at its head, and from there it is possible to catch one of the little launches which shuttle between various points on the bay. I went first to La Socapa, a small village at the foot of the hill, from the easily reached top of which, excellent views of the castle across the narrow(400m?) entrance to the harbour, and indeed for miles along the coast in both directions, can be had.

I was surprised not to find any evidence of fortification on this side of the harbour entrance.

Once back in Ciudamar it's a walk of about 20 minutes to the foot of the hill on which the castle itself is located. It has grown over several different levels, the lowest being a little above the high water line with some of the rooms carved out of the soft rock.

At a higher level the castle is protected by a deep moat and bastions at every change in direction of the castle's hefty wall.The various levels are connected by staircases and by a series of tunnels which is fun to explore

Some of the castle rooms are now used as a museum illustrating local building techniques and telling the story of piracy in the region. There was also a restaurant.

I was able to wander hassle-free at will throughout this very impressive example of (mostly) Spanish military architecture in a Caribbean setting. All in all a very rewarding day's excursion from Cuba's second city.

Prison: AB: "From 1775 the Castle served also as a prison and many important political figures where imprisoned there"
Lighthouses: Dating from 1840

Destroyed or damaged by Earthquake: Between 1675 and 1692 the fortress was damaged by a series of earthquakes and reconstruction had to be carried out under the direction of Francisco Pérez between 1693 and 1695 ... it was again damaged by earthquakes between 1757 and 1766. (wiki)
Bombarded by the British Navy: the Royal Navy under Rear Admiral Charles Knowles unsuccessfully bombarded this Cuban, Spanish-occupied castle, also called the Castillo del Morro, in April 1748 during the War of Jenkins' Ear.

Caribbean Sea
Situated in one of the SIDS: Cuba 1997

Piracy: Houses the Museum of Piracy
Sea Ports: built to protect the important port of Santiago
Man-made Terraces: built in a series of terraces

Located in a Former Capital: Cuba 1522-1589
Built or owned by Spanish: It was designed in 1637 by Giovanni Battista Antonelli on behalf of Pedro de la Roca de Borja, a Spanish noble and the colonial governor of Santiago de Cuba from 1637 to 1640