Joya de Ceren Archaeological Site is a pre-Columbian Maya farming village that has been preserved remarkably intact after it was destroyed by volcanic ash around 600 AD.

Loma Caldera, a nearby volcano, erupted and buried the village under 14 layers of ash. The villagers were apparently able to flee in time - no bodies have been found - although they left behind utensils, ceramics, furniture, and even half-eaten food in their haste to escape. The site was discovered in 1976 by Payson Sheets, a professor of anthropology. Since then the excavation process has continued. About 70 buildings have been uncovered.

Even more important than the buildings, however, are the paleoethnobotanical remains. The low temperature of the wet ash from Loma Caldera, as well as its rapid fall, ensured the preservation of much of the plant material. Of great importance is the discovery of manioc fields, the first time manioc cultivation had been found at a New World archaeological site. 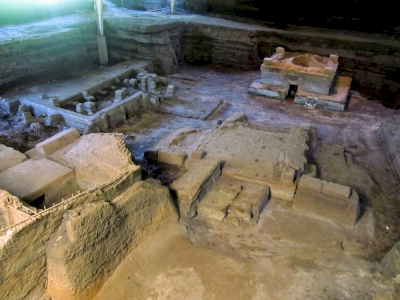 After some problems and delays in Nicaragua we found ourselves having to scale back our plans through El Salvador. Fortunately there is only one WHS to visit and it remained our priority. The worst thing you could do when visiting this site is expect it to be anything like any of the well known Mayan ruins in the region. This one is small scale and has obvious OUV that is more archaeologically technical than of broad appeal to the casual tourist. There are no major structures here and the village is believed to have only existed for 30 years or so before it was abandoned and buried by ash. Having said that we enjoyed our visit and found it to be a nice compliment to our overall understanding and appreciation for all things Mayan. The small museum on site is informative and a visit there first is necessary preparation for understanding the rest.

Although more have been found there are about a dozen structures, divided into 3 separate covered areas visible from above. Unlike many other Mayan ruins there is no climbing on and touching these ones. The path is above and you look down through the 14 layers of ash at what has been uncovered. The details are hard to pick out but you can get some sense of the size of the homes and their relation to one another in the village that once was. We were through it all in about an hour and entry was only $3 which was refreshingly affordable.

The site is easily reached by public bus. We visited as a day trip from Santa Ana and even with a required change of buses still made it there in under an hour. For those wanting more there are many other small archaeological sites in the area including the larger Mayan city of San Andres which was the administrative center for the region that included Joya de Ceren. 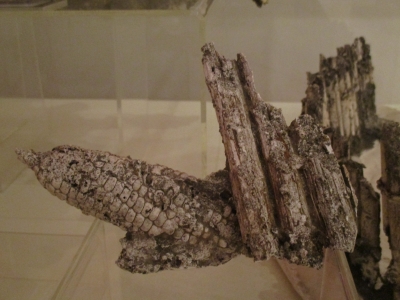 I visited this WHS in September 2016 during my Latin Grand Tour which last for 7 months. This is a very interesting WHS as most of the WHS in Latin America are related to Aztec, Mayan, Inca or Spaniards glory history, and Joya de Ceren is more to the daily life of the Pre-Columbian Mayan 1400 years ago. The ashes from the nearby Loma Caldera volcano eruption covered and preserved the site in time capsule, just like Leon Viejo and Pompeii.

I recommend to visit the museum first before entering the archaeological site so that one will have a better understanding of what's in the archaeological zone. Most of the excavated items are here, for example you can see many ceramics with drawing of animal found in jungle like monkeys and birds. The most interesting item I found in the museum is the carbonized corn. This is the evidence of Mayan domestication of plants and up till today the Latinos are still eating corn as their main food.

Joya de Ceren was a small Mayan village with 10 structures including some houses and storehouses. There is also a temazcal where the Mayan used as a sweat lodge to heal sickness. The site is not big and it will only take you around half an hour but interesting enough to be the only WHS in El Salvador.

In 1990 I was on the Joya de Ceren archaeological team of Andrea Gerstle. There were six of us and many wonderful locals who housed us and fed us and worked with us at the site. We found the third house, in fact Jose and I found it, 15 feet down when we scooped up a fragment of what turned out to be the wall of a rammed earth house.

Magnificent site. As noted it tells a tale of life among the 'common' people.

"Certainly the American continent was far better off before the journeys of Columbus and the European takeover." Andy, How do you know this? There is nothing in the record to suggest that pre-columbian America, anywhere, was paradise. Especially in this neck of the woods.

The Maya rulers where Kings and Gods at the same time. The Spanish Kings were no longer 'Gods' but might as well have been.

When you get into the mix of it all most of the world has evolved about the same way. Because Andy, 'WE ARE ALL HUMAN AND HUMAN NATURE DOES NOT CHANGE VERY MUCH IN THE SCHEME'.

Joya de Ceren is not your average pre-columbian/Maya site -- unlike the grandeur of Tikal and the artistry of Copan, Joya de Ceren is more about how the everyday people lived.

Thus, it's definitely worth it if you're into such archaeology.

We absolutely marveled at Joya de Ceren! It truly is a jewel and must not be missed when traveling in El Salvador. My husband is Salvadoran and American and he was so proud of his country and what they have uncovered. The museum was fantastic, the tour informative, and the landscaping meticulous.

I blogged our visit plus a bunch of pictures, which do not do justice what you see in real life. aut2bhomeincarolina.blogspot.com/2010/10/joya-de-ceren-archaeological-site.html

I had a wonderful time at the site about ten years ago and greatly enjoyed all that there was to learn and particularly the contrast with the Mayan ceremonial cities. However, I have to disagree with Ivette, though. We have not advanced at all. On the contrary, life remains very harsh for the poor majority. The environmental and social degradation a bus ride away in San Salvador with many people living in absolute misery is a vivid reminder of this. Certainly the American continent was far better off before the journeys of Columbus and the European takeover.

this is one of the most amazing sites you have never heard of. It shows aspects of the lives of people in a Pre-Colombus Latin America. Unfortunetly it has not been as well conserved as other sites. Joya de Ceren is a must if you are serious about archaeology

Going to this place was a great experience, because Iwas able to know how the PIPILES lived and wow how much we have advanced

Anthropologists have uncovered the first and only site of ancient, large-scale manioc cultivation in Central America at Ceren (17.06.09)

Mayan culture
Historical Food Remains: ICOMOS : "the objects recovered constitute a virtual inventory of their contents at the moment of eruption .... and a variety of foods ncluding maize, beans, chilis and cocoa beans"

Recently discovered: The site was discovered during the construction of government grain-storage silos in 1976, when a clay-built structure was exposed by a bulldozer. Excavation were carried out under the direction of Dr Payson D. Sheets (University of Colorado) in 1978 and 1980, but were interrupted by civil war. They were resumed in 1988 and have been continuing since that time." - AB Document
Excavated by American Universities: Colorado University

Built in the 6th century: Frozen around 590

Dubbed as another WHS: Pompeii of the Americas
Foreigner prices: $1 "Salvadorians and Central Americans" $3 - foreigners

First inscriptions: El Salvador 1993
Only WHS in their country