Click here to see more of my photos of Guanacaste 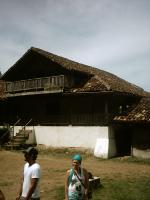 Extended: 2004: To include the Sector Santa Elena