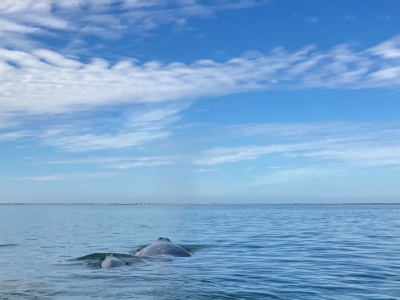 I visited the Grey whales at San Ignacio Lagoon, one of the two locations that make up the Whale Sanctuary of El Vizcaino. The B&B where I was staying (Ignacio Springs) booked the whale tour for me – beforehand I thought that you had to book as early as possible, but the lady just phoned in the night before. As always with sea-based tours: the weather & wind can cause cancellations, so it’s best to allow for a couple of days in the area (also to tick off the nearby Rock Paintings of the Sierra de San Francisco WHS, with which it even shared the initial nomination until they were wisely split up by World Heritage Bureau).

From the town of San Ignacio, which lies on Highway 1, it’s another 1-1.5 hour drive to get to the actual lagoon. The first 45km is on an easy, paved road, the last 15 on a relatively bumpy unpaved one. There’s nothing here but a few basic camps and some mudflats. The operator I used was Antonio’s Ecotours, which asks 60 USD per person for the tour. The boats can hold up to 12 people, but on mine were only 5. I was welcomed at Antonio’s, got a safety jacket fitted on and on we went in the small motorboat. The boats are only allowed to go whale watching at the mouth of the lagoon, not inside the lagoon itself as that is too shallow and would endanger the whales.

The tour lasted 2 hours, of which only 10 minutes each were spent getting to and from the main viewing area. We basically just entered “the zone” and waited. It did not take long to see whale activity left and right. It was estimated that at the time of my visit (February 1), 100 Grey whales were present at the lagoon. This number will continue to rise till the end of February when there could be as many as 200. Sometimes other species come as well, such as Orcas (who hunt the Grey whale babies). We also saw Bottlenose dolphins and turtles.

With so many whales around us, we could enjoy their behaviour. We observed a few in the distance jumping out of the water with almost their whole body. We spent quite some time with a mother and calf, the little one keeping mum’s side all the time and producing little puffs of water. Also, we found one sleeping – just a big thing floating on the water, until it got annoyed by our presence, lifted its head, and moved on.

There is a number of reasons that make this such a unique site:

So far we have gathered 29 WHS in our “Whales” connection. However, this is the only site dedicated primarily to whales, and together with Peninsula Valdes only one of two that derive their OUV from whales. I’ve done 3 other whale watching tours over the years (Iceland, Azores, Peninsula Valdes), but this one was by far the most productive ánd the most pleasant experience. 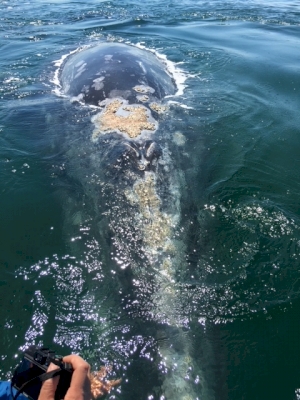 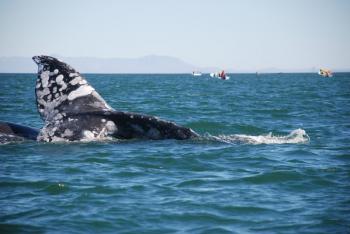 Seasonal WHS: Whales are only present from Jan - mid March