Ichkeul National Park is an important stopping-over point for hundreds of thousands of migrating birds each year.

The park comprises a shallow freshwater lake, temporarily flooded marshes and a mountain. It is located in northern Tunisia near the shore of the Mediterranean Sea. Among the lake's visitors are ducks, geese, storks, and pink flamingoes.

Dam construction on the lake's feeder rivers has produced major changes to the ecological balance of the lake and wetlands. Because these dams have sharply reduced the freshwater inflow to the lakes and marshes, the reedbeds, sedges, and other fresh-water plant species have been replaced with salt-loving plants. These changes have produced a sharp reduction in the migratory bird populations, which depend on the mix of plants that used to exist. 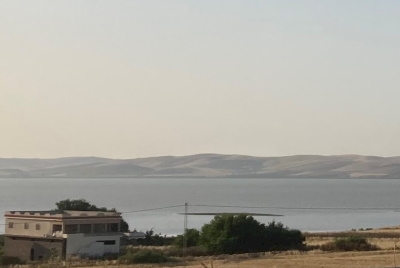 Ichkeul National Park is currently (May 2022) "closed" for unknown reasons – maybe they haven’t yet bothered to open up after Covid, or it’s because of domestic politics. It means that the official entrance with the ecomuseum is closed and access with a guide is only possible on prior request. But it is a large lake with all shorelands included in the core zone, so therefore never really inaccessible. Others visited it a few weeks ago by driving past the entrance and taking a walk from there.

I myself had come up with an even easier solution: I had seen on the map that road P11 to Bizerte runs partly along the lake. And I had to drive that P11 anyway on my move between the WHS of Dougga and my overnight stay Bizerte! In the town of Tinjah, you come closest to the shore. But a little earlier you have a good view from the road of the lake and the mountain, both called Ichkeul. It looked glittering at sunset.

Unfortunately, you don't get as close as I had thought: Tinjah is a reasonably large town, and its buildings block the view of the lake. At a bridge over a canal that connects Lake Ichkeul with that of Bizerte, I could have turned left – there the waterfront seems a bit more accessible. But because it was getting late and I wanted to be in Bizerte before dark, I just drove on.

The site was already inscribed in 1980 and has UNESCO ID #8 so it is one of the very early ones (it had been deferred at its first tries in 1978 and 1979). Still, it can be questioned whether it should have been inscribed at all and even more so if it is still worthy of it today. Ichkeul, Doñana in Spain, the Camargue in France and the El Kala region in Algeria are seen as the four major wetland areas in the western basin of the Mediterranean. Doñana certainly seems to trump Ichkeul by numbers: it is four times the size, and has twice the number of bird species and also twice the number of wintering waterfowl (according to the comparative analysis by IUCN).

The Ichkeul site furthermore was altered forever when dams were placed upstream around the lake in the 1990s. The lake became less freshwater and more salty. It led to endangered status, but that was already removed by 2006 (RAMSAR did so much later). This positive turn seems to have been a reward for Tunisian authorities that cooperated well with international organizations. They made amendments to limit the impact, but it still seems to be too early to say whether it had enough effect. I think more monitoring should have been brought in place.

The site’s OUV lies in the “exceptional density of water fowl”. I searched around for how the bird numbers have been doing in the past couple of years. There has been no Status of Conservation report to the WHC since 2010. The park’s own Facebook page shows that birds still manage to find it. The more independent "Les Amis des Oiseaux", a very serious group of local bird conservationists, reported in January 2020: “Nothing is going well for the wintering waterbirds in Ichkeul National Park… their numbers have been plummeting again for a few years! This year is downright catastrophic: less than 6,000 waterbirds were counted in this wetland of international importance during the international winter census. Compared to the maximum of almost 300,000 waterbirds counted in 2008 and an average of 141,000 individuals for the years 2008-2017, this is quite negligible and above all very worrying.” 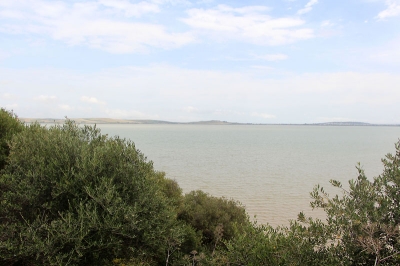 Ichkeul is easy to reach from Tunis. Take the motorway to El Alia and then drive below Lake Bizerte on a 4 lane street almost till the park entrance. The entrance is marked on google maps as “l’entrée de park national de l’ichkeul”. From there it’s about 15mins on a semi paved road to reach the parking lot. There was a lot of construction work going on at the time of my visit (Mai 2018).

The park itself will not take your breath away. There is a nice road to walk around a small peninsula with a tiny and free eco museum on the top of the hill and a wooden bird observatory closer to the lake. I saw some ducks far away but not much else. Even if you are lucky enough to see some birds, for all Europeans this would be rather boring. Despite the flamingoes, the birds there are exactly those you can probably spot in your nearest lake all summer long. The landscape itself is also nothing special, but still nice enough to enjoy a little hiking and nature.

To my surprise, there were many other visitors, including a bus full of scholars and other locals.

Well, the place was visited by me in 1999 but I guess that most of the information is actual. The easiest way to get there is by car (I haven't even checked the possibility of local transportation there), from Tunis take road P7 to Mateur and then P11 to Tinia, after a while turn left on a non-sealed but stable road you can reach the gate of the park (there is an entrance fee for the car). Just around 2 km from the place there is an eco-museum (at the time of my visit it was free of charge) with local exhibitions. From that point you can take an easy by-the-lake walk on a local road (unsealed) round the lake. All that area together with a nearby Jabal (Mointain) Ichkeul and the marchlands with bulls (on a way to the park) are inscribed as World Heritage Site. More info:

Former In Danger List sites: 1996-2006
Inscribed on a single criterion only: x. to contain the most important and significant natural habitats for in-situ conservation of biological diversity, including those containing threatened species of outstanding universal value from the point of view of science or conservation.
Inscribed at third attempt or more: Def 1978, Def 1979, Ins 1980