These three crime sites of the radical Khmer Rouge regime from the 1970s are places of remembrance for the victims. The preserved buildings and landscapes provide the evidence that the crimes have been committed. Tuol Sleng also played a pivotal role in the world’s first trial against genocide in 1979. 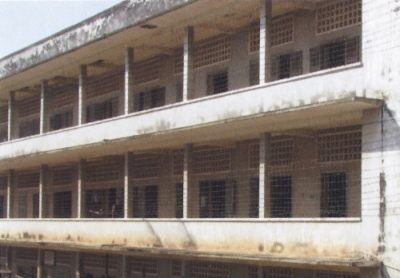 A few weeks ago, Cambodia has added 3 of its genocide memorials to the Tentative List as a serial proposal. The sites commemorate the victims of the Khmer Rouge regime, which was overthrown in 1979. The proposal still has the cumbersome working title “Former M-13 prison/ Tuol Sleng Genocide Museum (former S-21)/ Choeung Ek Genocidal Centre (former Execution Site of S-21)”.

I visited the former S-21 prison, now known as the Tuol Sleng Genocide Museum, in 2007. It is located in street 113 in the heart of Phnom Penh. In 2007 it saw some 50 visitors a day, but probably this has risen over the years due to the increase in global tourism - it is one of the few obvious “things to do” in the Cambodian capital. It is also a well-known place on the Dark Tourism circuit. Unfortunately I lost most of the photos of my visit, but I do still have my diary notes and the leaflet that was handed out upon entering the site.

The prison was located in an old school building. Between 1975 and 1978, some 12,000 prisoners were detained and tortured here. When further questioning was of no use, the prisoner was taken to the out-of-town Killing Fields (such as Choeung Ek, the third location of this serial tentative site). There he or she ended up in a mass grave.

The museum still resembles a school building, with classrooms, long corridors and a playground. The classrooms were divided into cells of about 2 by 1.5 meters. Parts of these have been preserved, just like the medieval-looking torture instruments. A climbing frame on the playground was used to hang prisoners.

In a number of rooms you can see original photos of those who were detained here and later killed. Among them also many members of the Khmer Rouge, who were no longer trusted. They are recognizable by their black suits and standard hairdos.

In a cinema room upstairs, the movie "Bophana" is shown which tells the human story behind this mass murder. During the Khmer Rouge regime, 2 million Cambodians lost their lives through starvation and destruction. At least two things happened that also characterize other genocides: there was a fairly large number of collaborators / sympathizers (sometimes out of conviction, but also out of opportunism or fear) and easily influencable child soldiers were used.

To determine whether this site has any chance of inscription, we must await the WHC meeting of 2020 for the results of the evaluation of “sites associated with recent conflicts”. In 2018, advisory bodies ICSC and ICOMOS each had already written their advice from which a few of criteria can be filtered out:

It takes an expert to really measure the 3 Cambodian genocide monuments against these criteria, but a few things do stand out: