Metz Royale et Impériale means the two major centres of the historic city of Metz in Lorraine. The cityscape of Metz is characterised by the duality of the "German" or "Prussian" Metz and the "French" Metz. On the one hand, the Royal Quarter, the area around Saint-Etienne Cathedral and the Moselle quays, which represents the Ancien Régime period. The other is the Imperial Quarter, the expansion of the city at the beginning of the 20th century during the rule of the German Empire. 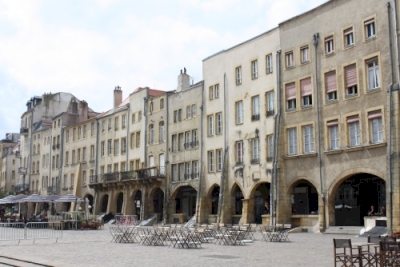 August 2018 - on our last day in France we visited Nacny in the morning and then Metz. It is quite a diverse city in terms of Architecture and cultural influence. We wanted to have some Lorraine lunch to begin with and had Quiche and Tarte Flambee in a small bistro.

Then we took some time to visit the city. We visited he main square with the houses with porticas, the cathedral, the Porte des Allemands, Saint-Pierre-aux-Nonnains and numerous little niches and modern artwork on the squares and parks. Due to the assemblance of different styles of history, I would appreciate to see this city on the WHS list sometime soon in the future. 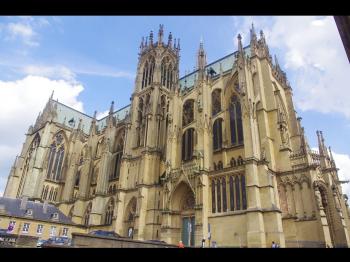 As many cities in France, Metz takes its origin in the Pre-Roman and Roman time, has been growing as major medieval centre and retains today a variety of great monuments from the different periods, including a splendorous cathedral. However, what makes Metz unique is its position, on the border between Germany and France. The city has been disputed during centuries between the two nations. The result is a unique combination of French and German culture. One of the golden period of Metz was during the German annexion of the end of the 19th century. From this imperial time, the city retains several buildings including the Imperial Station Palace, the Opera house and the temple.