Caesarea is part of the Tentative list of Israel in order to qualify for inclusion in the World Heritage List.

Caesarea was a city on the Mediterranean coast and was the capital of Roman Judea. The Roman client king Herod had Caesarea built in only 12 years between 22 and 10 BCE as a planned city on the site of a small Phoenician port. The city flourished in the Byzantine period and had a final heyday in the time of the Crusades. The Roman remains include a theatre, a hippodrome, aqueducts, palaces and a reconstructed amphitheatre. From the Crusader period, the ruins of the former Episcopal Church and parts of the city wall have been preserved. 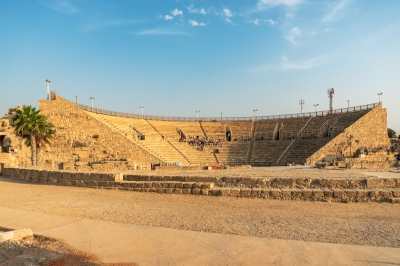 By the time I came to Caesarea, I was already having a mild case of archaeology overload from my time in Israel over two weeks in November of 2019, so I suspect I moved through the site too quickly. A true student of ancient history could likely spend 3-4 hours here easily – and will probably benefit from having a guide on hand. I still got the impression that the place was worth visiting while keeping myself to the major points of interest.

There are layers of structures and street networks in the principal part of the archaeological site. As everywhere, the surviving arches are among the most eye-catching artifacts. In some places, parts of original mosaics can still be seen. And, of course, remains of the places of worship are also quite picturesque. The huge open space that is the remains of a Herodian Amphitheater is among the main impressive features. The Roman Theatre, also built in Herodian times, is the most ancient of all theatres found in Israel.

Medieval fortified city with a few points of interest adjoins the archaeological part of Caesarea. There is an outdoor mall and entertainment complex in the Caesarea Harbor which is basically at the heart of the old city. It actually comes to life in the late afternoon around the time the archaeological site closes its doors; somewhat uniquely among Israeli national parks, parts of the archaeological ruins can be accessed for free outside of the park’s opening hours. Of course, the majority of people who come here in the evening are looking for food, shopping and entertainment that has nothing to do with the centuries of history herewith. Which, to me, is among the key factors why I do not think that this site deserves to be inscribed (if Israel ever rejoins UNESCO in the first place). It does, however, afford a person who spent time at the park an opportunity to have a dinner on the waterfront while catching the sunset.

Caesarea is located roughly half-way between Tel Aviv and Haifa, reachable from either in about 35-40 minutes by car. Standard itineraries frequently combine it into the “seaside corridor” with Haifa and Acre. If you have the Israel Pass “orange card” (which allows one entry to practically all national parks in the space of two weeks), entrance to Caesarea is included with that.

Caesarea was the very first site I visited on the private small-group tour I took in Israel, Jordan, and Palestine back in April-May of 2018. We drove north from Tel Aviv and had our National Park passes stamped for the first time out of many. The tour of the site started with a short film of the history of the city, which was remarkable to say the least. The site, being our first Roman ruin out of many, also seemed quite remarkable.

We toured the ancient theatre, through all the pedestals of Roman carvings found on site, which we would later find to be a staple in ruins in Israel, past my first public toilets which our guide sat on to demonstrate, and finally to the edge of the water where we saw the remains of the palace, now mostly underwater. A few scattered simple mosaics were still visible by the shore. It is said that the site extends far into the water, so much that there is an underwater park for all the remains there. From that viewpoint, ahead was the hippodrome and at the far end of the shore, the crusader fortress. A few kilometers' drive away, however, was the most unique part of the site, the aqueduct by the beach. Out of all the structures I saw, it appears the most authentic and interesting despite being outside the park boundaries.

After a few days, however, the impact of Caesarea greatly waned in the shadow of all the greater ruined sites of Israel we visited. On closer inspection, the theatre, the grandest monument in the national park, is actually heavily reconstructed, and even uses cement, resulting in a lack of authenticity. The rest of the site seems to lack a refined layout, maybe due to parts of the city being submerged. Based on everything I saw, the Caesarea of today just doesn't live up to the hype of its great history. It isn't anywhere close to the grandest, most beautiful, and especially best preserved of the countless Roman sites across the country.

Despite having lived in Caesarea for several years I see no reason to inscribe it. Bet Shean is a much more impressive Roman city in Israel and is on the T list as well. Caesarea's best feature is its aqueduct which is very nice to visit being located along the sea shore. It used to serve as the province's Capital and was the largest city in Israel at the time and a major sea port. Only a small part of what is known to have been its territory has been excavated though, so if excaviations continue its perspectives may change accordingly.

The Crusadean fortification are very impressive and merit a visit on their own right. This could also be an additional card to play when applying.