The Ancient City of Qalhat was an important stop in the wider Indian Ocean trade network and the second city of the Kingdom of Hormuz.

Its archaeological remains include the Friday Mosque (Bibi Maryam), necropolises, residences and workshops.

Qalhat has been one of the surprises of 2018’s WHC session. It got inscribed, after a proposal to overturn the Referral advice by ICOMOS. I was in Oman last April and of course I was aware of the upcoming nomination. At the time though I decided to give it just a quick look, mostly because of the experiences at the site a week or two before by Martina & Ivan. They were not allowed to enter and the archaeological site seemed closed. After staying overnight in the not too exciting city of Sur, I left my hotel at 7.30 the next morning. I had a hike on my agenda and needed to start before the heat got too bad. But unfortunately at 7 o'clock it felt already like being in a hot air oven. My planned hike was at Wadi al-Shab, about 25 kilometers north of Sur.

On the way there you will also pass the ruins of the ancient city of Qalhat. There is a small parking space at the highway (on the direction towards Muscat from Sur) that is a good vantage point to take pictures and have a good look at its setting. The only major thing that still survives from this trading town is the Bibi Maryam mausoleum. It is easy to spot from the highway, as well as a total overview of the smallish archaeological area that is near the coast. Qalhat is linked to the history of the Kingdom of Hormuz, a rather unknown city-state that might have been the Dubai of its era. It controlled the Strait of Hormuz from the 10th-17th century. They developed Qalhat on the opposing Omani coast as a secondary city to control both sides of the entrance to the Persian Gulf. It was mostly destroyed by an earthquake in the late 15th century and further destroyed by ransacking Portuguese in 1507.

Qalhat at the time was known to the international community as Calha. It appears under that name in the historic atlas compiled and drawn by Abraham Ortelius from 1570. Calha was visited by both Ibn Battuta and Marco Polo on their respective travels, which attest to its prominent status in the 13th -14th centuries. Ibn Battuta noted that it had "fine bazaars and one of the most beautiful mosques." This seems to relate to a larger city than the space covered by the current archaeological site. It’s easy to become cynical about a site of an obscure civilization and where apparently so little remains. A more up and close report of someone who managed to enter the site in 2011 shows that there is indeed more to it. He noticed a crypt, a cistern and smaller domed structures. He wonders about the Bibi Maryam mausoleum, whether it was a mausoleum indeed or the long lost Great Mosque (according to a comment to his post, the Mosque has been found closer to the coastline).

I hope the Omani authorities will further excavate the site and provide it with on site information panels or a small visitor center. From what I understood from the acceptance speech of the Omani delegate at the 2018 WHC session, it will eventually reopen to the public. 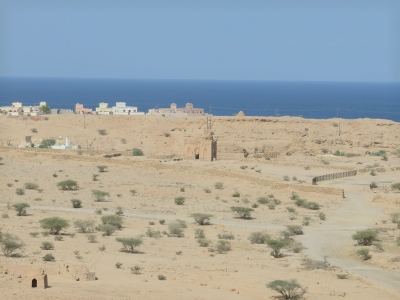 Qalhat looks like a joke nomination but apparently there is more than the lone building at the side of the highway. Unfortunately I can't report better news than the other visitors and my visit was in Dec 2018; you can “get” to the site in three ways:

• Snap a picture from the highway coming from the East. There seems to be a parking lot just for this purpose. If you have a good sense you can get a really close up view of the mosque standing there, or binoculars. Yes it is lame. Let's try number 2.

• Drive into Qalhat new town by following the misleading brown signs to the archeological site. Well, actually the signs stop after the highway turn-off but follow the road along the coast/beach and do not turn right into the town instead continuing onwards to the river where the road bends right and you can see the raised area beyond the river. Soon there is a gravel road turning left. No sign to indicate the archeological site is that way but soon a “CLOSED” sign greets you on the other side. For a brief moment you may think if you should drive up anyway but let me tell you there is a gate at the top and you will need to reserve downhill a gravel road. I didn't see any guards but this is probably out of the question. Still though, you could walk up the hill and see what's going on, just be warned that you may want to say you can't read English signs or something ;)

• #3. Remember the parking lot? There is a water runoff below it. Why should you care? There are steps going down past it all the way to the bottom and from there it's a 5-10min walk to the building. Roam free! Did I do that? I've done some naughty stuff to access sites (WHS and other) but I didn't want to get caught in Oman doing anything to offend them. Just saying this is an option. There is no sign to say it is off-limit from here so you can always play dumb.

So unfortunately this is one of those sites that are left closed for tourists and it looks like it will be like that for a long time. The mosque doesn't look special from the distance so it will have to be a low score until I one day see more of it and update the review. Wish I could review it better now, there are even pictures on Google map that show someone nearby either officially or naughty like I suggested. I am thinking that a guided visit would be something they could arrange from Muscat. 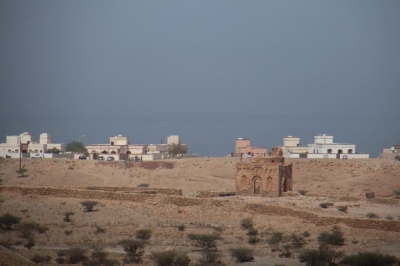 Qalhat is a former port town founded somwhere before 1500 BC, destroyed 3000 years later. Once a prosperous centre now lies buried in the sands of time, quite literally, as the only structure that remains visible is the Bibi Maryam mausoleum. It's accessible via a dirt road off the Qalhat town that can be reached when you pass the canal and bridges. Unfortunately, as we arrived to the foot of the hill it stands on, we were barred from going further by three men guarding the site, who pointed us to the notice board saying it's being closed for re-development of the area. What kind I'm not sure as there was no work to be seen. So we opted for the second best thing, drove the motorway past Qalhat towards Sur and then made a turn back in the Muscat direction. There's a parking place on the highway with the viewpoint of the Mausoleum and we took a picture.

As 'Ancient City of Qalhat'

Revision of former TWHS The Ancient City of Galhat (1988)

The Ancient City of Qalhat

Fifth phase of restoration work at World Heritage site of Qalhat over (26.06.19)

Straits: Located at the Gulf of Oman, "a strait (and not an actual gulf) that connects the Arabian Sea with the Strait of Hormuz" (wiki)

Iron Age: The earliest historic evidence in the ancient city of Qalhat is an Iron Age tomb dating to around 500 BC (AB ev)

Ibn Battuta: During his visit, Ibn Battuta noted, that it had "fine bazaars and one of the most beautiful mosques." He further noted the mosque was built by Bibi Maryam and included walls of qashani. (wiki)
Marco Polo: Marco Polo wrote of Qalhat: “Calatu (his name for Qalhat) is a great city, within a gulf that bears the name of Calatu. It is a noble city, and lies 600 miles from Dhufar towards the northwest, upon the seashore. The people are Saracens and are subject to Hormos. And whenever the King of Hormos is at war with some prince more potent than himself, he betakes himself to this city of Calatu, because it is very strong, both from its positions and from its fortifications. They grow no corn there, but get it from abroad, for every merchant vessel that comes brings some. The haven is very large and good, and is frequented by numerous ships with goods from India, and from this city the spices and other merchandise are distributed among the cities and towns of the interior. They export also many good Arab horses to India. For as I have told you before the number of horses exported from this and other cities to India is something astonishing“.

Built in the 11th century: flourished in the 11th to 15th centuries CE (AB ev), though its origins are much earlier ("The earliest historic evidence in the ancient city of Qalhat is an Iron Age tomb dating to around 500 BC")

Located in a Former Capital: mythical first capital of Oman, second capital of the Kingdom of Hormuz
Not open to tourists