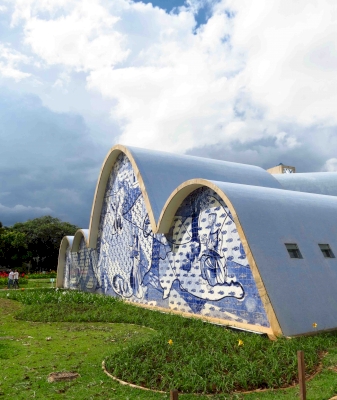 Designed by Oscar Niemeyer: Designed the main buildings there
Garden City Movement: "The Pampulha Modern Ensemble was the centre of visionary urban design for part of a ‘Garden City’ promoted by a city administration who were responding to emerging international ideas" (AB ev)
Reinforced Concrete: Church: "In this project, Niemeyer experimented with reinforced concrete, abandoning the architecture of slabs on columns and creating a parabolic concrete vault—a form until then only used in hangars. " (wiki)

Unfinished constructions: "For various reasons, the overall scheme was never completed. The Golf course was not developed and today the space is occupied by Belo Horizonte Zoo. The ensemble was also intended to have a hotel on a lake promontory and a restaurant on Love Island but neither of these were built." (AB ev)
Glazed tiles: Church: "embellished by a large mural by Cándido Portinari of Portuguese blue-and-white glazed tiles (azulejos) depicting scenes from the life of St. Francis of Assisi."