The Group of Monuments at Mahabalipuram consists of temples and reliefs from the 7th century Pallava-dynasty, known for their sculptures carved out of rock.

Mahabalipuram was a seaport of the South Indian dynasty of the Pallavas, before they lost power to the Cholas.

The sculptures were hewn out of local granite. They fall into 4 different categories by mode of execution:

The bas-relief “Descent of the Ganges” (also known as Arjuna’s Penance) is considered to be a unique artistic achievement. The sculptures of Mahabalipuram have influenced those in Cambodia, Annam and Java.

I visited Mahabalipuram in the first day of my visit in India in March 2015. I went there by taxi from Chennai airport (approx. 2200 INR for return trip to the city center), but there is very good system of cheap public buses from Chennai.

The site itself was nice but, comparing to other WHS in Southern India, not so deligthful. The sites is not big, but there is some distance from Shore Temple to Five Rathas. The latter I liked the most, especially because there were a lot of school children in uniforms, running and climbing the stairs and statues. The surroundings of the Shore Temple were, to my regret, not so beautiful and the beach was full of litter. 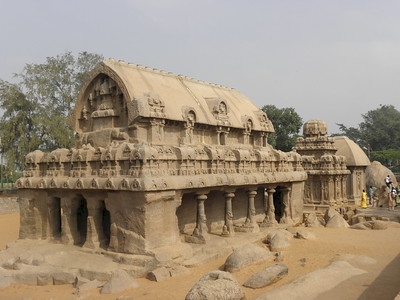 Mahabalipuram is a great place to start a journey through (South) India: it’s a small relaxing town that comes with a pretty good WHS. I visited the groups of temples and other carvings around town in one morning. Already at 7.30 am I walked to the Shore Temple – I had set out early to beat the heat and the crowds. But I surely wasn’t alone: dozens of Indian pilgrims clothed in red robes were already coming back from a bath or an offering in the sea. The entrance to the Shore Temple is separate from that to the beach, and it’s here where you’ll have to pay the 250rs entrance fee (valid for all sights in Mahabalipuram). This Shore Temple is the most recent of the Pallavan constructions. It did remind me a little of another WHS, Prambanan on Java. Unfortunately, most of the sculptures at the Shore Temple have faded beyond recognition, due to erosion from wind and water at its location near the sea.

While admiring the structure, I was ambushed by groups of girls who wanted to talk to me or take a picture. I had thought that the 21st century would have ended this curiousness here in India too, but it hasn’t (men often just stared and stared…).

Right in the middle of town, 5 minutes on foot from the Shore Temple, lies the bas-relief “Arjuna’s Penance”. This is a sight that immediately captures your attention – such an elaborate and huge sculpture! This is rightly singled out in the ICOMOS evaluation too, as a “unique artistic achievement” and highlight of Asian art. The sculpture fully covers one side of a rock, and is made up of lots of single scenes.

Finally, I walked to the Five Rathas, at the other end of town. These temples were cut out of one boulder, an impressive piece of work. However, I liked it least of the main sites. Its best features are the large stand-alone statues of animals: a lion, a bull (Nandi) and an elephant.

Group of Monuments at Mahabalipuram

Mamallapuram monuments to get watchtowers, guards (09.11.13)

Monumental Monoliths: Pancha Rathas
Lighthouses: There is a watch tower located in a small hill apart from the caves which guided the traders coming through the sea for trade in this ancient trade port of Pallava kingdom. A fire will be let in this watch tower to guide the sea travelers during Pallava times. Just next to this watch tower is the light house taller than watch tower built by British. (chennaionnet.com)

Built in the 7th century: mostly built during the reign of Narasimhavarman I (630 - 668)