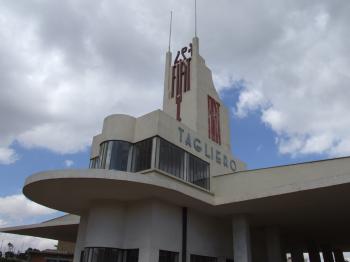 Art Deco
Italian fascist architecture: Italian Fascist architecture e.g the former "Casa del Fascio (see link) and the "Casa degli Italiani" still has the "fasces" on the pillars at its entrance
Garden City Movement: "The plan is also an early example of the implementation of urban zoning principles, championed by the contemporaneous Garden City Movement."
Modern Urban Planning: "The creation of a complete urban landscape arising from the early implementation and continuous adaptation and development of modern urban planning theory in an African context at a vital stage in human history – between two world wars – is one of Asmara’s unique qualities" - see "brief description of nominated site"
Neoclassical architecture: President's Palace: "Governor Ferdinando Martini wanted a structure with colonnades at the entrance in neoclassical style" (wiki)
Vernacular architecture: vernacular styles from the highlands were adopted and assimilated by Italian architects, engineers and planners in the design of buildings and public space

Located in a Capital City: Asmara - Capital of Eritrea
Dubbed as another WHS: In the late 1930s the Italians changed the face of the town, with a new structure and new buildings: Asmara was called Piccola Roma (Little Rome)